Patricia Espinosa: Who is the UN’s incoming climate change chief?

Mexican diplomat is a team builder with a ruthless streak, say ministers who have worked with her 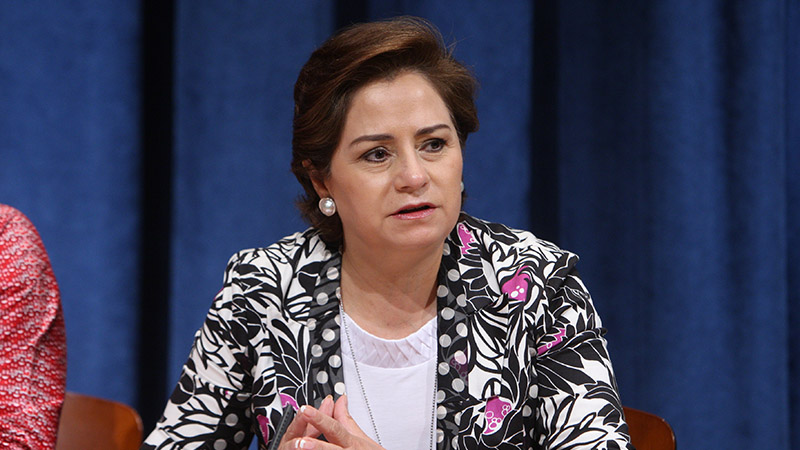 Patricia Espinosa addresses the Press Briefing on the Report of the High-level Panel on the Post-2015 Development Agenda (Pic: UN Photos)

Against all the odds and unlike the previous year in Copenhagen, faith has been restored in the international climate change talks with the freshly minted Cancun Accord.

The deal commits the vast majority of the world’s countries to keep working on a plan to curb global warming.

At the centre of it is Mexican diplomat Patricia Espinosa, described as an “excellent leader of negotiations” in the definitive tome on UN talks since 2009, Power in a Warming World.

“Her talent was to be able to listen to everybody carefully, and she was smart enough to put together a fantastic team, a quality that should not be disregarded.”

Salerno has been at the heart of UN climate talks since 2009, and she welcomes this week’s news that Espinosa had been chosen by Ban Ki-moon to be the UN’s new climate chief.

“I cannot see a better person. As a mum I’m very happy my children’s future is in her hands,” she says, praising the choice of another Latin American woman to hold this tough position.

A UN bureau of national representatives could still veto Ban’s decision, but despite some grumbles over his pre-emptive announcement it seems unlikely and would set an unwelcome precedent.

One of the favourites to replace Christiana Figueres in the Bonn post, Espinosa brings the experience of a former foreign minister and ambassador to four countries.

A career diplomat since 1981, the mother of two is fluent in four languages and in 2015 was appointed to Ban’s high level panel on sustainable development.

Trade, drug abuse and the rights of women are listed as areas of expertise on her CV (see below).

In an interview with Climate Home in 2011, Espinosa stressed the essence of her strategy in Cancun was to ensure all countries felt involved, from China and the US to small island states.

“It was an uncertain year. Even when we came to the first day in Cancun we were uncertain what we could achieve, but putting the focus on an inclusive process and taking into account everyone’s views proved to be the right way to do it,” she said.

Former UK climate chief Chris Huhne worked closely with the Mexican during the Cancun talks after he was handed the task of steering negotiations on the Kyoto Protocol.

He speaks of a “consummate professional” who can play poker with the best. “Whatever her own views she will not suddenly show she’s unhappy,” he says.

Mexico is a member of the OECD club of developed economies, and not part of the G77 group of developing countries, but it has long been seen as a bridge between the Global North and South.

“All parties feel she is unbiased. In the past we have had executive secretaries who despite the best intentions have been seen by both sides as biased,” he says.

Bonn is a short train ride from her current residence in Berlin, but Espinosa faces huge challenges when she arrives at the UN’s climate HQ on the Rhine.

Figueres’ tenure will rightly be seen as a huge diplomatic success, given the unanimous support for the 2015 Paris Agreement.

Yet the task facing countries delivering on that deal is complex, warns Muller, with many areas of the agreement still needed to be filled in.

“It’s quite a difficult task, despite what people are thinking,” he says, and few have “any idea” how a proposed global stocktake on climate ambition in 2018 will actually work.

Report: Paris climate change pact to come into effect ‘by 2018’

Headaches include plans to introduce a standardised measuring, reporting and verification system, ensure adequate flows of climate finance are on offer and work out the role of market mechanisms.

“There is a lot of sensitive work and she needs to manage the process,” he adds.

“Countries have given the secretariat an enormous amount of work; it will need a manager,” says Salerno.

In that Espinosa appears to have made a start, travelling to Rabat last week to offer advice to the Moroccan chairs of the 2016 UN talks. “She should do well,” a senior official observing her close-hand said.

Where Figueres starred as the fulcrum of the UN climate body’s efforts, fronting up on camera and behind the scenes, Espinosa’s reign may see a shift in emphasis towards creating a team.

Most analysts agree the key to her success in 2010 was her deployment of Mexico’s diplomatic muscle, led by Luis Alfonso De Alba, now ambassador to Vienna.

Picking up from the wreckage of Copenhagen and working closely with Figueres, her team embarked on a series of informal meetings in Berlin, New York and across Africa and Asia to re-engage governments.

Analysis: How to bring the Paris Agreement in this year

“She’s a natural team builder. She knows when she doesn’t have the skills and finds someone who does,” says Huhne, who was appointed by Espinosa to run a strand of talks in 2010.

Malini Mehra, a close observer of the 2009 and 2010 talks, speaks of the Mexican as an “innovator and consensus-builder who showed her mettle in Cancun”.

“It’s no exaggeration to say the Mexicans saved the UNFCCC from irrelevance after Copenhagen.”

Not everyone was so generous about the 2010 summit at the time. Speaking days after it finished Huhne told British MPs a “village cricket team meeting” would have been better organised.

Bolivian diplomat Pablo Solon, who alone opposed the Cancun Accord, was scathing in the Guardian, labelling it a “giant step backwards” and criticising Espinosa’s decision to announce it agreed.

“Bolivia may have been the only country to speak out against these failures, but several negotiators told us privately that they support us,” he wrote.

Comment: Why there’s no time to dally on the Paris Agreement

It is the ability to think clearly in a crisis that sets Espinosa apart, says Salerno, adding they worked closely together at the end of the summit to secure agreement.

Aware of the deep levels of hostility towards her proposals – which did not include binding emission targets for rich nations – Espinosa offered delegates an extra five hours to come to a solution.

“To be fair, she gave us hours to try and move things but it did not happen,” says Salerno. “She did not want to do it [announce the deal] but she had exhausted other possibilities…

“I cried over that and she cried over that… we did not want that scenario to happen.” Those wounds have long healed, argues Salerno, but it’s perhaps a sign the Mexican is not to be underestimated.

“She is tough enough and ruthless enough that in the end if there is a problem and if it’s a small minority she will steamroller them,” says Huhne.