Brexit: Why a vote to leave the EU is bad news for the climate 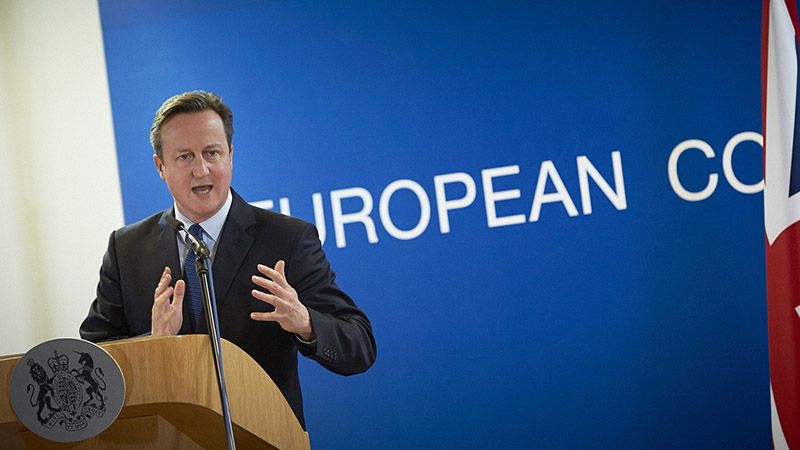 A British vote to leave the EU offers potentially good news in the fight against climate change: the resulting economic slump could lead to a fall in greenhouse gas emissions.

A legion of top economists predict a UK recession in the event of a leave vote, with the Treasury warning of four quarters of negative growth from June 2016.

“If you were forecasting emissions post-Brexit you’d see them quite a bit lower simply taking an average from the economic forecasts from the IMF, OECD and Treasury,” says Chris Huhne, UK energy and climate chief from 2010-2012.

Longer term, the omens are equally bleak for the region’s low carbon aspirations if the British electorate vote out.

A UK exit from the European Union is like to be bitter and protracted, soaking up the political will of a region that has long led on tackling climate change and developing cleaner forms of energy.

Should UK prime minister David Cameron elect to invoke Article 50 on 24 June, signalling the start of talks to leave the EU, experts say the region’s low carbon aspirations will be placed on hold.

The markets are already signalling unease. A no vote will send panic rippling through the world’s financial centres. The pound is likely to drop significantly.

The impact on the EU’s faltering carbon price would be “calamitous” says Emil Dimantchev, an analyst with Oslo-based Thomson Reuters Point carbon.

He predicts a 1 euro drop from the current 6 euros cost of a tonne of carbon, making it significantly cheaper for heavy industry to pollute.

And while Point Carbon sees the UK negotiating a deal to stay in the EU’s emissions trading zone, uncertainty would like see energy companies dump pollution allowances on a market already suffering from a glut of permits.

“I am sure anyone contemplating a supply chain investment for renewables will not have made a decision in last couple of months,” he tells Climate Home.

A vote for leave could extend that caution “for a couple of years” while the UK negotiates its divorce with Brussels, he suggests.

Another reason is that many of those advocating Brexit have “fairly strange views on energy and climate change” causing “massive uncertainty” in the wind and solar sectors.

In Brussels, a no vote would leave officials at the European Commission’s climate and energy division tearing their hair out.

Plans are due in July detailing how the 28 member states will share the pledge Brussels made at last year’s Paris climate agreement to cut emissions 40% on 1990 levels by 2040.

“I guess the effort sharing will look different in case of a leave vote so they must have those calculations in their back-pocket in order to update their July proposal when necessary,” said an EU official, speaking off the record as they were not authorised to comment.

In London, top climate wonks would need to start work on a national climate plan for submission to the UN. Without it the country would not be able to join the 2015 Paris deal.

“They would have to figure out how do they continue participating in a Paris agreement that was structured for the EU as a whole,” UN climate chief Christiana Figueres told Politico on Friday.

Cameron will likely face calls to step down if he loses the vote. His replacement may not be so inclined to support green issues (Pic: European Council/Flickr)

UK officials could also face exclusion from EU climate meetings ahead of the COP22 Marrakech climate summit in November, given the long-term and sensitive nature of those discussions.

“In terms of involvement of UK officials… that depends on how the British government led by perhaps Boris Johnson or Michael Gove seek to play it,” says former Greenpeace head Stephen Tindale, now director at the Alvin Weinberg Foundation.

“I think the other member states will say once Article 50 has been triggered… they’d be justified in saying why are you part of the negotiation? The British would find that difficult.”

The environment for climate policy would likely get fruitier next year as Brexit negotiations intensify.

Politico reports Maltese officials are preparing for their six-month presidency of the European Council to be extended to a year, filling in from July-December for the UK.

Few believe the EU would be in a position to adopt tougher emission targets while London-Brussels talks drag on. Worse, the Paris climate deal could come into force in 2017, potentially without the continent where it was born.

“The reality is the EU will be utterly inward looking and navel gazing – it will be very hard to deal with any other serious issues – and it will have its own crisis with the Euro,” argues Chris Huhne.

What talks on energy and climate there are in Brussels could face intense hostility from eastern members empowered by the bloc’s fragile position.

The February 2016 deal Cameron struck with EU leaders after a short negotiation will leave Poland and Hungary thinking there is an “EU a la carte open door” says Yannick Jadot, an MEP with the French Green Party.

He fears the EU’s renewable energy targets could suffer if member states reluctant to embrace a green shift plump for a pick-n-mix approach to policymaking.

Point Carbon’s Dimantchev agrees that the balance of power will shift east as the UK relinquishes its 13% of votes on the European Council.

“It would weaken future EU climate policy and ambition. The UK a strong progressive voice and pushing for a strong EU-ETS,” he says.

It’s hard to piece together exactly what the UK’s energy and climate policy might look like under Brexit, but the clearest indication has come from the ‘Fresh Start’ group of around 100 Conservative MPs who number energy minister Andrea Leadsom in their ranks.

“Leaving the EU will give us freedom to keep bills down, to meet our climate change targets in the cheapest way possible, and of course, keep the lights on,” she said in a speech last month.

Their energy manifesto includes ditching the 2020 targets for renewables and investing in shale gas and new nuclear, which they say would ensure the UK could meet its climate goals at lower costs.

Others suspect darker motives. Brexit supporters are twice as likely to believe climate science is a hoax, revealed a recent poll of 1,168 people by ComRes.

Scrapping the 2020 renewable energy goal would be a “fantastic own goal” if it meant projects already lined up to be built with government support were canned, says Siemens’ Knight.

“If you think climate and environment will be safe with them – it’s like handing a baby to King Solomon… you have to listen to what they have been saying,” says Huhne.

“The record of the leading Brexiters, in whose image a post-referendum government would be shaped, offers no reassurance that they would resist any of this,” they say.

An advisory from top law firm Pinsent Masons says leaving the EU could make the UK the easiest place to invest in clean energy, but without any incentives to do so does not think the energy system will be transformed.

“Putting it another way, we could become the easiest place in Europe to build wind farm infrastructure, but still not actually develop any,” their briefing says.

Ian Simm, chief executive of UK-based Impax Asset Management said he can see “no upside” for the UK energy sector in the event of a no vote.

“We have mostly run our power assets down over the past 25 years. Therefore, we do need investors to be confident enough to put their hands in their pockets and commit to the next wave of power plants,” he told Reuters.

Longer term, it’s impossible for anyone to predict exactly how the UK and Europe’s energy and climate partnership could evolve once separated.

Given the UK’s size, geopolitical weight and the EU’s need to ensure Ireland isn’t penalised for being stuck alone out West it’s unlikely Europe would switch off the interconnecting gas and power lines.

Still, the costs for being outside the EU’s nascent energy market would hit £500 million (US$700m) a year by 2020, say consultants at Vivid Economics.

And former UK government advisor Michael Grubb, now professor in international climate and energy at UCL, believes an integrated energy market will save the region billions of euros by 2030.

Our gas systems complement each other: central European dependence on Russia is matched by British dependence on the Middle East, so conjoined, each can help the other,” he writes in the Guardian.

“As our own gas reserves decline, the North Sea also offers wind, waves and capacity to store both gas and perhaps carbon dioxide, as well as connections to Scandinavian hydroelectricity storage.”

Eamon Ryan, leader of Ireland’s green party and energy minister from 2007-2011, argues Russian attempts to squeeze gas supplies in the past decade show it’s better to negotiate as a bloc.

“When you deal with this on a unilateral basis you end up much weaker, and in 5-10-15 years this puts UK energy in a very insecure position,” he says.

As for the UK’s stance at the international climate talks, that too is unclear.

The country has a history of leadership, be it Margaret Thatcher urging action at the UN in 1988, and Tony Blair placing global warming on the 2005 G8 agenda in Gleneagles.

The 2008 climate act is now copied around the world, its four-year cycle of carbon budgets a model for the Paris climate deal’s review framework.

The 13-strong Green Growth Group of EU countries was conceived in London to accelerate low carbon investment and policies across the continent.

It packs a punch, holding 60% of the votes in the Council of Ministers, acting as a counterweight to eastern states who would see the region’s carbon cuts slow.

Analysis: How will Norway go carbon neutral from 2030?

Outside the EU’s 28-strong bargaining bloc the UK would lack allies at the UN, forcing it to either join a group including the US, New Zealand and Australia or one made up of Korea, Switzerland and Mexico.

Either way, the UK would have to think creatively to win influence and deploy its diplomatic muscle, says Maas Goote, former Dutch and lead EU climate negotiator.

Many Brexit supporters point to Norway and Switzerland as examples of how to thrive outside the EU, but in the context of getting your way at the UN climate talks he’s not so sure.

“The influence of Switzerland and Norway has been very small, and don’t forget most of the time they sided with the EU on major points,” he says.

For Oslo and Bern, Goote points out, foreign spending on climate projects related to forests and other green energy projects has been a critical plank in securing traction with other countries.

Yet many Brexit supporters want the country’s foreign aid budget – which meets a 47-year-old UN target of 0.7% of national income – slashed and the money spent at home.

Global events could mould opinion, in a year likely to be the hottest on record and when concentrations of carbon dioxide in the atmosphere rolled through 400ppm.

For most voting next week CO2 levels are not on the radar. A bitter campaign has focused on immigration, the economy and the notion that an older, greener England can be reborn.

But for those watching from afar, it’s an odd choice to make in deeply worrying times.

“In the new climate global governance context, is there a role for an individual European country?”

The UK’s international cooperation has been exemplary, adds Ryan. “The thought we can get greater collaboration by retreating into nation states is just cuckoo. It’s not gonna work.”