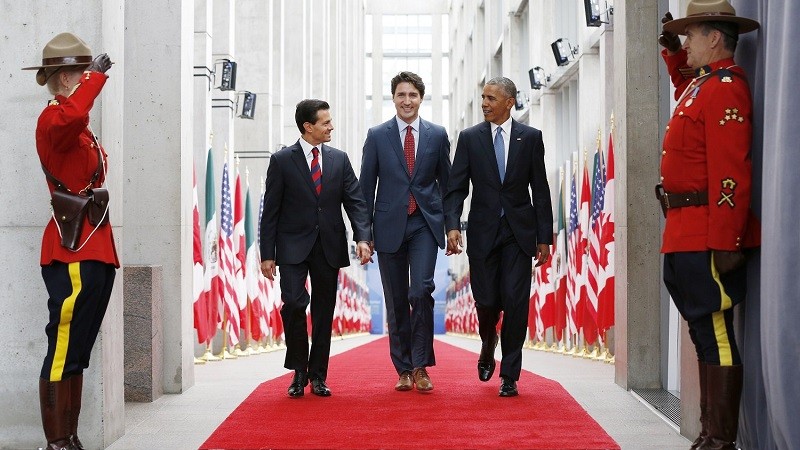 The leaders of Mexico, Canada and US in Ottawa (Pic: Office of the Prime Minister, Canada)

North America will get half its electricity from low carbon sources by 2025, under an agreement struck by the “three amigos” on Wednesday.

Mexico also joined an initiative by the US and Canada to cut methane emissions from the oil and gas sector 40-45% over the same period.

Today, 37% comes from nuclear, renewables or fossil fuels with carbon capture and storage. To achieve the 2025 goal, nearly all new generation capacity must be clean, she said, accelerating an existing trend.

Canada is ahead of its neighbours, with 65% renewable and 16% nuclear on the grid, making it well placed to export. The countries agreed to collaborate on cross-border electricity transmission projects.

The target adopted by all three countries will have an impact equivalent to taking 85 million cars off the road, analysts at the Environmental Defense Fund, Centro Mario Molina and Pembina Institute calculate.

Sam Adams, US director of the World Resources Institute, said the deal set a “powerful example” to others.

“Sharing a common vision for the future, these leaders recognize the importance of providing economic stability and greater climate security for the long term,” he said.