Cloudy, cool weather in the high north could not save the sea ice, which fell to more than two million sq km below average 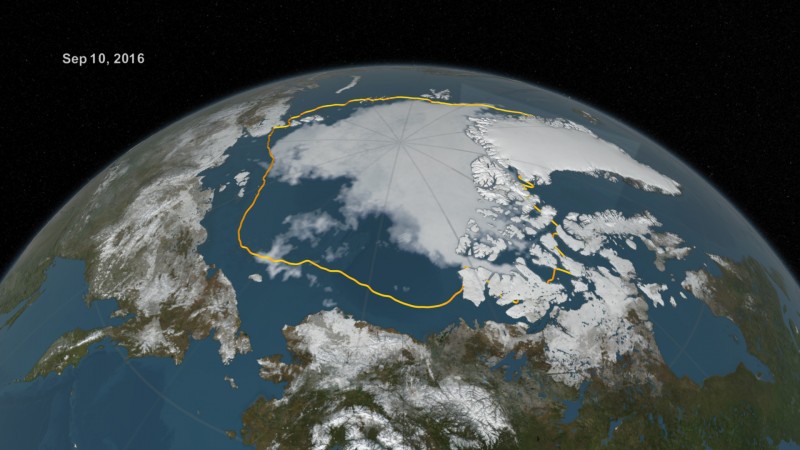 Arctic sea ice has plunged to the second lowest extent on record.

The minimum occurred earlier this week, but US government scientists at the National Snow and Ice Data Centre (NSIDC) waited until they were sure the ice had finally begun its winter expansion.

Huge areas of the normally ice-bound Beaufort, Chukchi, Laptev and East Siberian seas were open and exposed to the warmth of an atmosphere that has grown radically hotter.

On September 10, just 4.14 million sq km at the far northern extreme remained covered. This is more than two million sq km below the average since satellite records began in 1979. This summer equals 2009 as the second worst year for Arctic sea ice. The deepest low occurred in 2012.

In March, the ice cover had appeared set to beat all previous years, with NSIDC director Mark Serreze calling the weather “crazy”. But the ice pack staged somewhat of a recovery over the mid-summer months as the Arctic experienced a cloudy, cool summer. Given this, the NSIDC announcement said that the final sea ice extent was surprisingly low.

This might be explained by two huge cyclones, which made their way north in August and battered the remaining ice in the eastern Beaufort and northern Chukchi Seas. Also, in early September, the temperature in Siberia was 9C above average. Upper ocean temperatures were also unusually warm.

Walt Meier, a sea ice scientist with NASA’s Goddard Space Flight Center, said the sea ice was not behaving as it had done in the past. Partly because huge areas were less thick than they once were.

“In the past, we had this remaining sea ice pack that was mostly thick, old ice. But now everything is more jumbled up, which makes it less resistant to melt, so even late in the season you can get weather conditions that give it a final kick,” Meier said.

The 10 lowest minima have all occurred in the past ten years- Nasa has called this the “new normal” for Arctic ice.

And while the summer minimum provides a popular news event, Claire Parkinson, a senior climate scientist also from Goddard, said records were falling in every month.

“To think that in this record of Arctic sea ice that goes back to the late 1970s, since 1986 there hasn’t been a single record high in any month of the year, and yet, over that same period, there have been 75 record lows. It’s just an incredible contrast,” she said.

Globally 2015 was the hottest year ever recorded. This year is almost certain to surpass it. The far north is bearing the brunt of rapid climate change, with the Arctic having warmed much faster than the rest of the world.

This means the fragile ice cap – upon which many creatures, including polar bears and walrus rely – is breaking up more and more over summer.

Recent Arctic sea ice lows are unlike anything in 160+ years https://t.co/tGJudrFFMP h/t @zlabe for animation pic.twitter.com/RUb2eF5QlA

The loss of the ice creates a dangerous climate feedback as the loss of the bright, reflective surface, which bounces solar radiation back in to space, exposes the absorbent ocean. The earth, already groaning with heat, sucks up even more energy.

Greenpeace spokesman Ben Ayliffe said the sea ice was our “early warning system” and action must be taken to avert climate change.

“We face the very real possibility of the disappearance of Arctic summer sea ice in our lifetimes. That is not just catastrophic for the people and wildlife of the Arctic, it’s dangerous for all of us. We are breaking a critical link in the chain which controls our climate system. Arctic sea ice is the world’s air-conditioning system and we are switching it off,” he said.