Can the right be good for the climate in Latin America?

Comment: As centre right parties assume power across the continent it’s easy to say this will mean a cull of environmental laws, but it’s not that straightforward 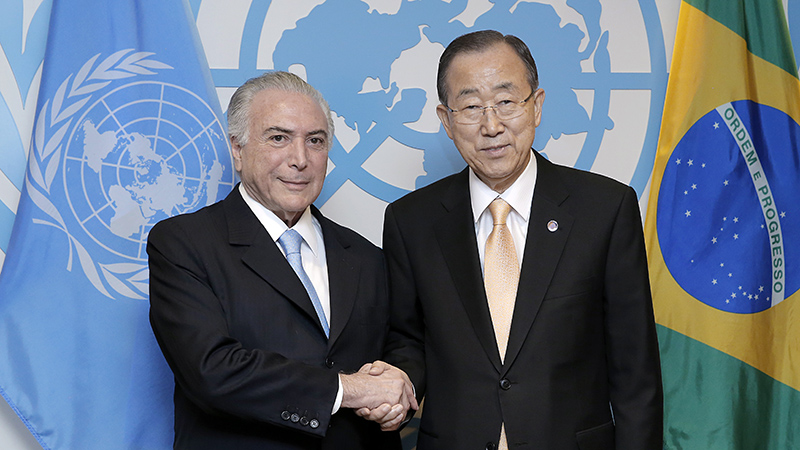 By Carlos Rittl in Sao Paulo

And so it was that Brazil turned right.

The downfall of Dilma Rousseff and the instatement of her conservative vice-president, Michel Temer, not only have put an end to 13 years of Workers’ Party rule in Brazil, but also consolidated a historic defeat for the left in Latin America.

The region’s four biggest economies – Brazil, Mexico, Argentina and Colombia – now have center or right-of-the center governments. At first sight, that might spell doom for the mother of all progressive agendas, the fight against global warming.

The right-wing approach to regulation naturally gives leverage to the private sector to resist change.

As it happens, this is Latin America, not by chance the birthplace of magical realism. Things that might be perfectly sensible elsewhere in the world don’t work quite the same way in this corner of the Earth.

The much-feared demotion of environmental protection in general and climate mitigation in particular has not always been thus far the logical consequence of the rise of the right.

In Mexico, for instance, the right-wing government of Felipe Calderón has famously helped salvage international climate negotiations at the Cancun conference, and kickstarted a comprehensive domestic mitigation policy that includes carbon pricing.

The chancellor who served that government is now the UN’s top climate official.

In Colombia and Peru, the climate agenda seems to float above the mood swings of the ballots. In Argentina, the recently elected right-wing president Mauricio Macri is more sensitive to the issue than his predecessor, Cristina Kirchner.

In his first speech at the UN General Assembly, earlier this week, Macri touted climate change as the world’s biggest biggest challenge faced by Mankind. However, it remains to be seen how that increased sensitivity will play out, given the host of other pressing domestic problems the country faces.

Such apparent climate-friendliness of the right relates to how part of the left has traditionally regarded development and natural resources in this part of the world.

In Brazil and Argentina, but also in Venezuela, Bolivia and Ecuador, the left’s development playbook has included State ownership of behemoth fossil fuel companies (a token of “sovereignty”), to whom large sums of taxpayers’ money have been directed; State-driven expansion of heavy infrastructure (to “boost the economy”), often in disregard of social and environmental safeguards; and, in the Brazilian case, subsidies to gasoline and tax breaks to automobiles (to “keep families’ consumption rates” as an “anti-cyclic measure” against the “international crisis”).

Ms. Rousseff’s personal playbook has also featured a grudge against renewable energies, which she famously touted as “fantasy”, and alliance with agribusiness whereby Senator Kátia Abreu, the “Chainsaw Queen”, ended up as Agriculture minister – while the agrarian reform so dear to the left was all but forgotten.

Never before had agribusiness and fossil fuels received so much public investment as in her term. It should be noted, however, that Rousseff’s final act as President before being suspended, in April, was to send the Paris Agreement to Congress for ratification.

This may prove to be the highlight of Temer's term in office #Brazil #climate #ParisAgreement pic.twitter.com/pwfSQkoTo2

Michel Temer has been sending mixed signals since he took office as interim President. On one hand, some of worst Brazilian politicians now either sit in his cabinet or have an increased influence in his government.

His government plan mentions the environment only once – as a barrier to development. Indigenous lands, environmental licensing and protected areas are under pressure from his allies in Congress. The mighty Agribusiness and Industry associations (CNA and CNI) are empowered.

On the other hand, Mr. Temer’s Environment minister, Sarney Filho, is a well-known advocate of more ambition in the climate/environment agenda, and has seized on the opportunity provided by the recession to bury the controversial Tapajós mega-dam project.

The new chancellor, José Serra, has listed among the top ten priorities of Brazil’s foreign policy the “special responsibility” of his country in environmental matters. Maybe in a bid for international legitimacy, Temer has vowed to ratify the Paris Agreement in September 12th, making Brazil one of the first big polluters to do so.

The proof of the pudding, however, will lie in implementation. The most backwards economic agents are guaranteed to impose resistance to an early adoption of the mitigation policies from Brazil’s Paris pledge.

Will Mr. Temer compromise? Business interests in government and in Congress are also pushing for a weaker environmental licensing.

Will he give in? How will he deal with Petrobras, the state oil company at the heart of the recent corruption scandals, and the high hopes for the deep ocean oil against the reality of the Paris goals?

Most importantly, Mr. Temer must perceive climate mitigation as a strategic development issue. Brazil has several comparative advantages on adopting a clean development agenda as part of the pathway to economic recovery.

Clean energy, efficient agriculture, and forestry can deliver emission cuts and at the same time create jobs and revenue. It’s in the President’s hands to seize on the opportunity.

Carlos Rittl is the executive secretary of the Brazilian Climate Observatory, a network of 40 civil society organizations