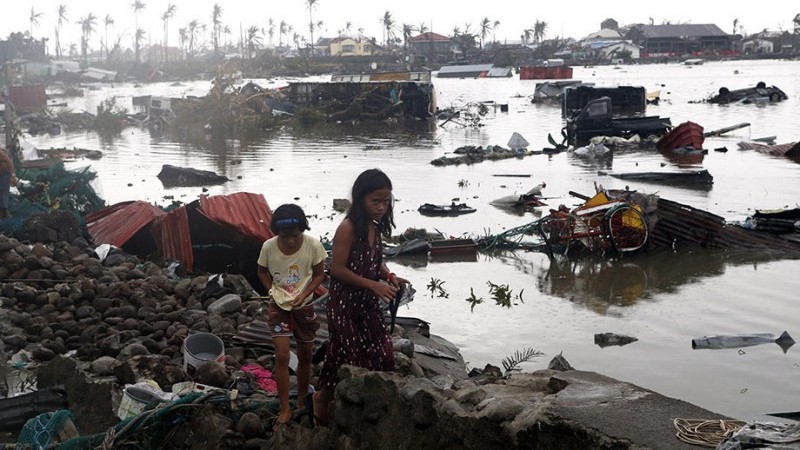 Communities like this one were utterly destroyed by super typhoon Hayain. But are now more crowded and precarious than ever. Photo: Daria Devyatkina/Flickr

Three years since the biggest storm ever to have made landfall destroyed the Philippines city of Tacloban, people have poured back into the most vulnerable shoreline slums, causing some to double in size.

In early November 2013, a six metre storm surge drove up the Leyte Gulf toward Tacloban. Thousands of lives were lost and 90% of the city was destroyed. Residents of the extensive “informal settlements” found little left of their makeshift homes of corrugated iron, scrap wood and plastic.

Perhaps for their safety, perhaps judging the timing opportune, the government fast-tracked existing plans to relocate these unauthorised neighbourhoods (knowns as barangays). A “no-build zone” was implemented (somewhat arbitrarily) at 40m inland from the high tide mark.

Families from roughly 40,000 households had not only lost their homes, but were now told that they would not be allowed to rebuild.

The government plan was to relocate the settlements to permanent, legal communities on higher ground. But the programme has been plagued by insufficiencies. Of a planned 200,000 new housing units, just 10% have been built. In September, vice president Leni Robredo interceded to try and rescue the situation, calling on government agencies to “eliminate red tape” that he said was causing delays.

As a result, she says, “people had nowhere to go, so they just went back where they lived before”.

Paulina Lawsin-Nayra, executive director of the Eastern Visayas Network based in Tacloban, says that despite the overarching threat from typhoons, which are likely to be made more severe by climate change, there was little will to move among the tens of thousands who remain by the shore.

“Yolanda taught a lot of lessons,” she says. “But then because of the lack of alternatives people are still staying there.

“People are conscious in terms of heeding the calls for immediate evacuation. But in terms of moving away from their permanent home, the acceptance is not that high. Especially among the fisherfolk communities. Because the alternatives sites that were given are up on the hills, so to them they will be displaced. Even if they opt to live there it will be very expensive for them to be travelling to the site where they have their fishing boats.”

Despite this there has been some movement. Hundreds of families have heeded the government’s call to move. But the trickle of households moving uphill has been outweighed by a flood of relatives coming into the no build zones to take advantage of good quality temporary shelters provided by aid organisations.

“There are several barangays whose population has actually doubled and even more than doubled after Yolanda because of the availability of assistance in Tacloban,” she says.

Lawsin-Nayra stresses that the data are anecdotal and concrete figures do not exist. But her consultations with local community groups report consistent rises in population in the typhoon danger zone in Tacloban.

“It is meant to be temporary [housing] because many of them have received shelter assistance from different agencies. But the houses that they built are actually better than the houses that they had before Yolanda [the Filipino name for Haiyan]. So those, the families invite relatives, who are coming from the towns outside Tacloban and they would settle there,” she says. “There may be movement [to the permanent government housing] but you won’t notice it because of the sheer number of additional migrants, new occupants.”

The problem is not isolated to Tacloban. It is estimated that one million people were left either displaced or living in makeshift shelters in “unsafe areas” across the country by Haiyan.

The typhoon-prone Philippines already has one of the highest populations of informal settlers in South East Asia. Many of them crowded around the coast, where the economic opportunities are greater. Moving them into formal housing is shaping as a huge political problem for Rodrigo Duterte’s new government, says Lucille Sering, the Philippines former climate change secretary.

“That’s the biggest challenge for us, the relocation of this tremendous number of individuals who would still refuse to be relocated. I think that’s on the top of the list,” she says.

Duterte has approached the issue gently, promising that no communities would ever be demolished without proper relocation being available. This indicates just how much electoral power the informal settlers command.

“The political aspect would be hugely difficult,” says Sering. “Because we have elections every three years and its always an issue to be taking out people where most of your voters are from. So the political will has to be tremendous, not just from the president, but from the local [governments] which are the main entity which has to implement this.”

Thomas believes using the disorder and chaos of typhoons as a trigger for mass relocation is not the panacea for the Philippines’ vulnerable communities.

“Post disaster relocation is a really risky strategy. But that doesn’t mean that governments shouldn’t be proactive and be considering how to do planned relocation where it’s necessary and thinking about how to get people out of harms way or at least building good evacuation shelters,” she says.