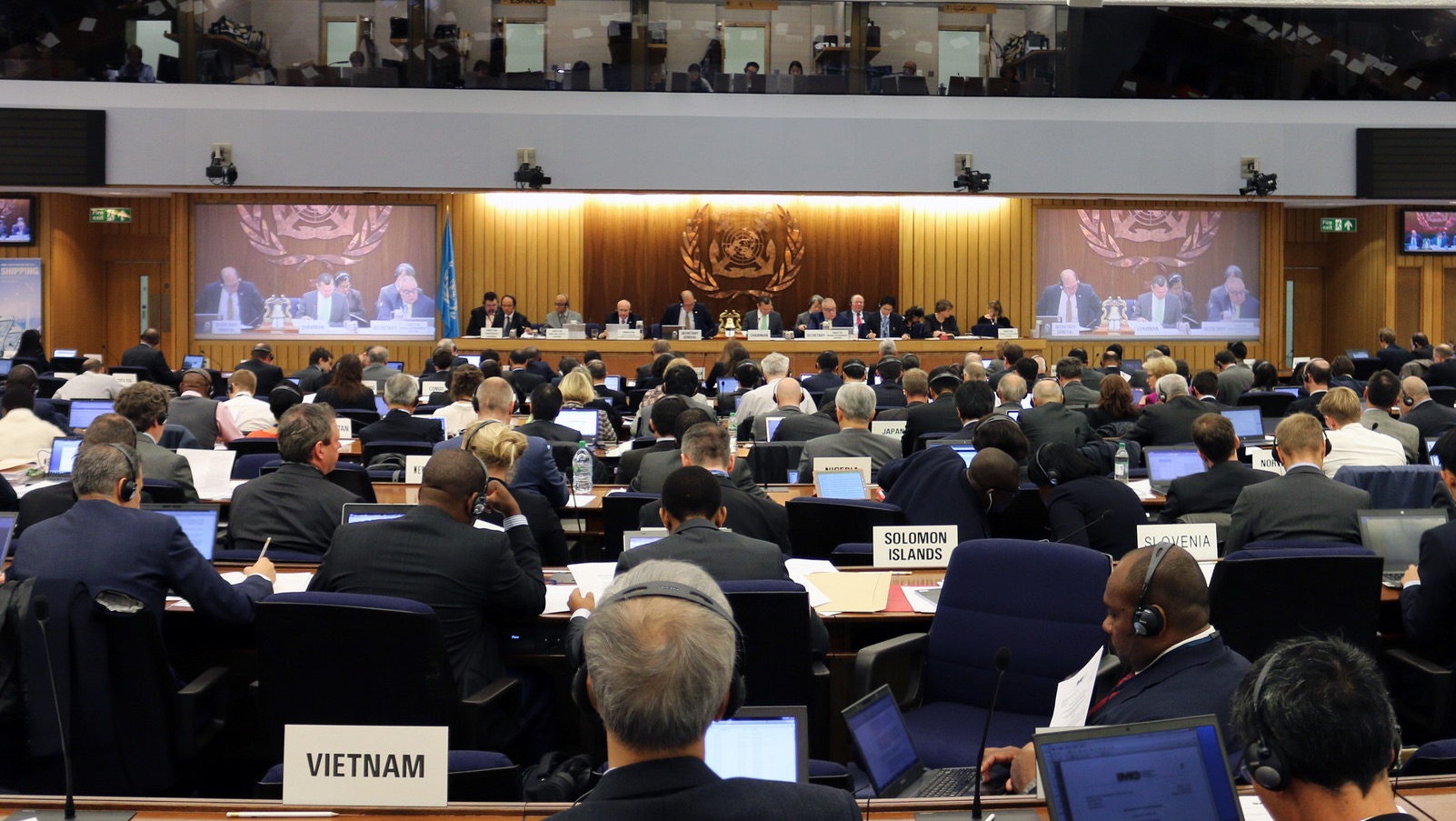 On closer examination it’s more a plan to have more plans, but at least sets a few deadlines: 2018 for an initial carbon cutting strategy and 2023 for the final one.

IMO envoys said they are committed to meeting the aspirations of the Paris climate agreement. Still, with the carbon budget to limit warming to 1.5C set to run out in 2021, 2023 seems a little late to release a plan.

Shipping accounts for nearly 3% of global greenhouse emissions, but aside from what experts say are fairly loose energy efficiency regulations, the sector’s current carbon limits are, well, limited.

Below Climate Home offers some observations from last week’s talks.

1- Is it time for some climate reality?

The climate deal among the 171 members of the IMO was hard-fought, with many countries and influential industry lobbies against taking a tougher line against emissions.

But the world looks to the UN for leadership and honesty. What is the scientific basis for the IMO saying Friday’s agreement was “good news for the environment”, as it claimed on Twitter?

“Welcoming these important steps, the Secretary-General calls for urgent and ambitious action to limit the greenhouse gas emissions from global shipping [which] are projected to rise significantly given the critical role that shipping plays in the global economy,” he said.

2- Efficiency should be an urgent priority

Climate and shipping was first brought up at the IMO in 1998. 13 years later it managed to agree on some efficiency regulations. Despite industry claims it has become over 10% more efficient, green groups reckon these need to be ratcheted up, but this week a decision at the IMO was postponed till 2018.

“It beggars belief that the IMO should abandon plans to increase the stringency of design standards that are being easily met and exceeded years ahead of schedule’” says John Maggs, president of the Clean Shipping Coalition.

As a result of Friday’s decision on a climate plan, countries will start discussing what a potential target or cap could look like from 2017. The IMO won’t start recording emissions data from ships until 2019 and no decision will be taken until the organisation has three years worth of data: 2023.

3-  Has anyone at the IMO read the Paris climate deal?

Countries agreed they will publish an initial strategy on shipping emissions by 2018, the year the UN undertakes a “global stocktake” on climate policies and ambitions. But it will not be binding and is subject to change in 2023 once sufficient levels of data have been supplied.

There is no mention of the 1.5C or 2C temperature targets in the IMO climate paper. However there is an idea that it should undertake GHG studies every five years from 2020, which could fit into the UN climate body’s plans for regular reviews over the same period.

4- GHG data is important, but there are pre-2020 steps that are possible

“The data collection system will equip IMO with concrete data to help it make the right decisions, as well as enhancing its credentials as the best placed and competent forum for regulating international shipping,” says IMO Secretary-General Kitack Lim.

Countries have agreed to discuss what a climate target could look like but any decisions will have to wait till GHG data has been collected. On efficiency there is a provision for a 2018 review, which left Bill Hemmings, shipping director at T&E, apopletic.

“Nearly 20 years after being tasked with tackling climate change impacts from shipping, the IMO has enacted only one measure so far, the EEDI, and for new ships only. Yet it now stands in disarray. Improving ship efficiency is a no brainer and a classic example of a ‘win-win’, but apparently the IMO prefers open-ended reviews to concrete action.”

“We will have an initial strategy by 2018… integrating pieces like the  three-step process [data collection, technical examination, decisions], energy efficiency and any progress we can make on black carbon. All these pieces are relevant. We also have the opportunity to start thinking about additional measures beyond that,” she said.

5- We need clarity on the risks, opportunities from GHG targets on development, growth

Major emerging economies are clearly worried that tougher climate targets could impinge on their economic growth: that was the essence of a submission to the IMO from China, India and Brazil before this week’s talks.

“As long as world trade is growing, shipping will grow too,” their national representatives said in a document submitted to the IMO. “This responsive characteristic of shipping makes it impossible to determine its peak emissions in the same way that a country could do.”

Some small island states are also worried, judging by the IMO decision text. They want the strategy to “address impacts of further measures to reduce GHG emissions from ships in specific categories of countries such as developing states, SIDS and LDCs”.

It seems sensible, but chew on this: over half the global shipping fleet is registered in developing countries including Liberia, Panama, the Marshall Islands and the Bahamas.

And does it make any sense for small island states to try and slow a deal to cut shipping pollution? Former Marshall Islands foreign minister Tony De Brum told the IMO his country was behind tougher action in 2015.

In contrast to other UN environmental forums, shipping industry groups wield significant influence at the IMO (a full list of these groups and NGOs who contribute to the negotiations can be found here).

Bodies such as the International Chamber of Shipping (ICS) and a host of officials representing the tanker, cargo and ferry industries frequently make interventions during plenary sessions.

In a statement on Monday ICS secretary general, Peter Hinchliffe described the latest decision on a roadmap as a “significant decision” and criticised environmental NGOs (who can also participate in the talks) for branding it a failure.

“Unfounded criticism of the consensus that governments have achieved, in very difficult political circumstances, serves to polarise the IMO debate, making the support of developing nations for additional global measures even more complicated to achieve,” he said.

ICS members, which represent over 80% of the world merchant fleet, are working on what an initial IMO CO2 reduction commitment in 2018 might entail, the statement added.

Canada’s Burack compares the situation to a recent agreement on airplane emissions at the International Civil Aviation Organisation (ICAO), which was strongly supported by the main industry group IATA.

“Having talked to some industry groups here, some are of view something needs to be done and some are not, and so part of our work needs to be creating a more homogenous view within the industry,” she said.

7- Do we need some honesty about the make-up of national delegations?

Reporting rules mean we can’t identify speakers or zone in on specific discussions. Still, it’s well known that representatives from leading shipping registries represent some governments at these talks.

The registries are effectively big businesses: flagging a ship in a particular country can save companies millions in taxes every year.

What’s good for a big business is not necessarily good for its home country, especially if that country is a low lying small island state, for instance.

Here’s Burack again: “It is probably the biggest contribution to why earlier talks were not successful… the standard proponents of ambition are not consistent with the power brokers in the shipping industry.”

8- Restrictive reporting rules should be reassessed

Current regulations effectively give countries and big business carte blanche to say what they want, when they want, with key decision-making bodies safe in the knowledge their comments cannot be reported.

Climate Home understands that it is impossible to expect major policies to be developed in the public glare, hence working groups are closed to journalists.

But when national delegations make plenary interventions or statements that clearly run against the goals of the UN’s Paris Agreement, we would argue it is in the public interest to report that.

Sadly, at the moment we cannot without seeking permission from relevant member states, who are understandably reluctant to have their obstruction made public.