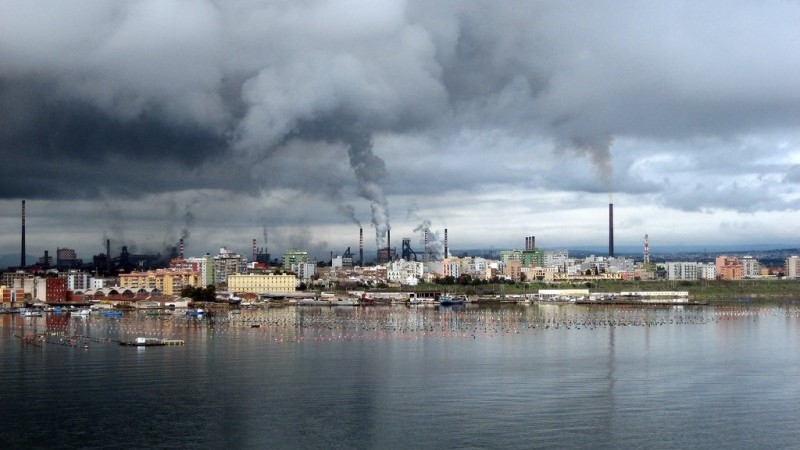 Ilva steelworks in southern Italy is set to be one of the pipeline’s first customers (Pic: Flickr/Mafe de Baggis)

A report looking into human rights abuse in Azerbaijan may have been rejected to smooth the way for gas trading with Europe, its author has said.

The report was voted down in the Council of Europe on 23 January 2013. On 28 June of the same year, the European Commission gave the go-ahead to a pipeline joining Azerbaijan with southern Italy, known as the Southern Gas Corridor. On 11 August, the Italian prime minister Enrico Letta visited the Azerbaijani president Ilham Aliyev in Baku.

German Social Democrat Christoph Strasser, who wrote the report when he was his country’s human rights commissioner, said: “I would be surprised if there wasn’t a connection between these events. By rejecting my report Azerbaijan saved its reputation and nobody had nothing to say when they started doing business [in Europe].”

Strasser was speaking to Italy’s RAI (Radiotelevisione Italiana) programme “Report”, for the Caviar Democracy episo which aired on 21 November 2016.

The report was rejected under unusual circumstances, according to some observers. Several MPs, including Azerbaijan’s Naira Karapetyan, noted that a number of new faces from Russia, Turkey, Spain and Italy were present on the board for the first time – to vote down the report – and were never seen again at the Council of Europe.

Strasser reported political pressure from the Azerbaijani government, who denied him the visa to enter the country while he was researching for his report. “It was the first time that an MP tasked with writing a report was denied access [to a relevant country]” he said.

Public finances: The European Bank for Reconstruction and Development, European Investment Bank, Asian Development Bank and World Bank are all considering publicly-backed loans for the development in excess of $500m each.

Elkhan Suleymanov, a friend of the Azerbaijani prime minister and head of the country’s delegation within the Council of Europe wrote a letter to the German parliament claiming that Strasser was a liar. “The German parliament answered firmly, also issuing an appeal to to the Azerbaijani government to allow me in the country where I could monitor the situation of political prisoners. But that didn’t help,” Strasser said.

An estimated 100 people are in jail for their opinions in Azerbaijan, the documentary reported. Even a like on a Facebook post criticising the government can get someone into deep trouble.

The Italian MP Luca Volonté, who was part of the Azerbaijani lobby group who voted against the report, is accused of corruption and money laundering in relation to the project. He is being investigated by Italian prosecutors under suspicion of taking a €2.4 million bribe from the Azerbaijani government, to support its cause at a European level.

Samuel Farmanyan, an Azerbaijani MP, said: “When I started working with the Europe People’s Party I realised that within the Council of Europe there was a lobby group that was spreading like a metastasis. The group was headed by Luca Volonte’ and Pedro Agramunt, a Spanish MP”. Farmanyan is “Absolutely certain” that the Azerbaijani lobby paid for the support of its allies.

Strasser, who resigned as human rights commissioner earlier this year to focus on his work in the German Bundestag, said for the government of an oil rich country, paying a €2m bribe is not a big deal. “From their perspective, it’s a good investment” he said.

The Trans Adriatic Pipeline is expected to enter Italy through the small town of Melendugno, in Puglia, before being connected to the national grid.

It will connect Italy and Central Europe to the southern gas corridor, which will bring Azerbaijani gas through Georgia, Turkey, Greece and Albania once it is completed – expected to be in 2020.

The Southern Gas Corridor is meant to diversify the energy portfolio of Mediterranean countries in order to reduce the EU’s dependence on Russian gas, tapping into the Caspian sea’s reserves.

But a study from the Oxford Institute for Energy Studies found that the Azerbaijani gas may not be as abundant as previously thought, due to an increase in domestic demand and an unexpected decline in the state-owned reserves.

Simon Pirani, author of the study, said: “The TAP consortium says that, to start with, the corridor will deliver 10 billion cubic meters of gas, a figure that will increase up to 20 billion.

“However, I don’t understand where this additional gas may come from. We know that the current reserves will be in decline by 2023.

“Azerbaijan has recently asked Russia to supply additional gas to meet its domestic demand. If they don’t have enough for their own needs, how much will they have to export to Europe?”