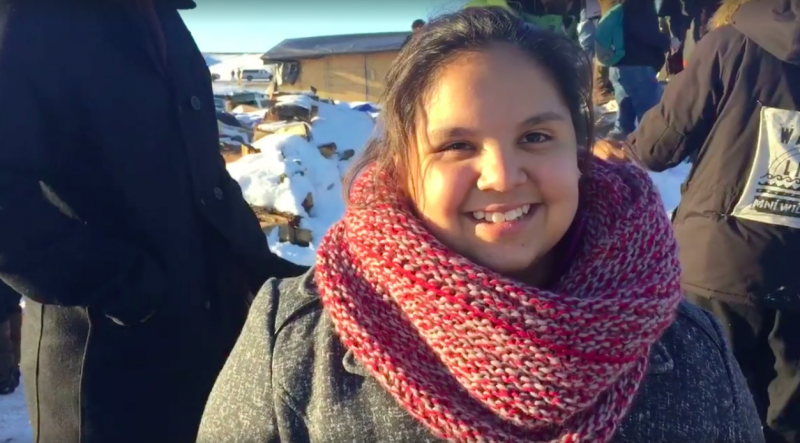 As politics tilts towards unreason in many parts of the world, the years to come will to require a legion of heroes from the grassroots to the highest offices.

Here, Climate Home celebrates just a few of the many people we met, spoke to, read and wrote about in 2016 who impressed us by refusing to accept defeat.

In November, a group of 21 US youths won the right to have a lawsuit heard in the federal court that will test whether their government can be compelled to act on climate change.

In response to a government motion to dismiss the case, district judge Ann Aiken said: “I have no doubt that the right to a climate system capable of sustaining human life is fundamental to a free and ordered society.”

The ruling could set a precedent for a major weapon in fighting new president Donald Trump’s administration if he seeks to strip away regulations that are intended to clean up the US energy sector.

The Canadian environmentalist is a long time adversary of the tar sands companies that have held successive Canadian governments in thrall. In July she spoke to Climate Home’s Ed King about negotiations with those companies that lead to a cap on what she calls the “single largest and most destructive project on earth”.

Hawkins’ graphical representation of a climate spinning out of control grabbed the public imagination. His original tweet has been shared more than 15,000 times and spawned dozens of news articles reaching parts of the internet where the global rise in temperature is often ignored or misrepresented.

“As scientists I think we need to communicate, and try different things,” Hawkins told the Washington Post. Climate Home’s Megan Darby reported on the many copycat approaches it spawned as other scientists rebooted their own findings as spirals.

(Kudos to Ed King and Megan for “It’s the GIF that keeps on giving” and “the spiral that went viral”.)

A newly graduated solar engineer from Kenya who runs her own solar installation business. Juma spoke to Climate Home’s Africa reporter Lou Del Bello about her career ambitions and her wish to ensure that everyone in her community had “at least some lighting at home”.

Juma was trained by the Women in Sustainable Energy and Entrepreneurship (WISEE). She is one of thousands of women entering the workforce around the world as solar technicians.

The Bank of England governor has done more than any other in the financial world to raise the risks and opportunities of climate change, says Ed King.

In what may become one of the most influential climate reports of all time, Carney helped to produce a document that called on corporations to get real about the risk climate change poses to their business models. The report was backed by some of the world’s biggest investors and financial institutions, giving it serious clout.

In the late days of 2016, a coalition of Indian tribes and environmentalists triumphantly celebrated the announcement that the North Dakota Access Pipeline had failed to get permission to cross the Missouri River. 13-year-old Iron Eyes, a member of the Sioux tribe that owns the downriver Standing Rock reservation, was part of a local youth movement involved in organising the protests long before they became global news.

Her chat with activist Naomi Klein, posted on the latter’s Facebook page on the day the pipeline was redirected, is anti-venom for the poisonous US debate that lies ahead. “I feel like I got my future back,” she said, causing Klein to 100% lose it.

Women at the top of the UNFCCC

Further down the UNFCCC foodchain, there remains work to be done to bolster gender equality on national delegations. But the sight of so many women – representing the gender that will suffer more from climate change – at the top is heartening.

In an interview with Ed King, Betts called on climate scientists to face up to the complexity of their subject when engaging in public debate. In the face of an ever-growing demand for news and views to come in discrete and definitive packages, Betts has fought the urge to dumb things down.

“There’s a point where you can simplify it too much and if you cross that line then it will come back to bite you in the end,” he said.

The chieftess of the Gullah/Geechee nation – the ancestors of slaves that live along the low lying sand islands of the lower US east coast – Marquetta Goodwine became the first to represent her people at the UN climate talks in 2016.

“The land is our family and the waterways are our bloodline. That is how we as the Gullah Geechee people see this land. We are inextricably tied to the land and the Sea Islands,” she told Climate Home. “It means so much to our community for me to get there and have our story be a part of this finally.”

Channel 4 science editor Tom Clarke emailed in with some suggestions:

“Hardly an unsung hero,” said Clarke, but Attenborough used the opening and final refrains in the mesmerising Planet Earth 2 to make a rallying cry for us to live up to our responsibility as members of a community of species.

We must protect our planet, and all those creatures who call it home. #PlanetEarth2 pic.twitter.com/9WpOWbMXgr

Attenborough’s latest documentary had more 16 to 34 year old viewers than the X Factor and he repeatedly mentioned climate change, while showcasing the extraordinary world that we are frittering away.

Clarke also thought the governor of California deserved a mention for his defiant stance against incoming president Trump. In 2016, Brown signed a bill into state law that mandated some of the deepest carbon emissions cuts in the developed world.

After the US election, Obama officials noted that the states would be a key centre of resistance against Trump’s predicted attempts to unravel US climate policy. Speaking to scientists in San Fransisco in December, Brown said: “We’ve got the scientists, we’ve got the lawyers and we’re ready to fight.”

Who were your climate heroes in 2016? Send suggestions to [email protected] or tweet it to @karlmathiesen. We will update this page.