In the second of a three-part series, we look at how President Obama galvanised international action on climate change 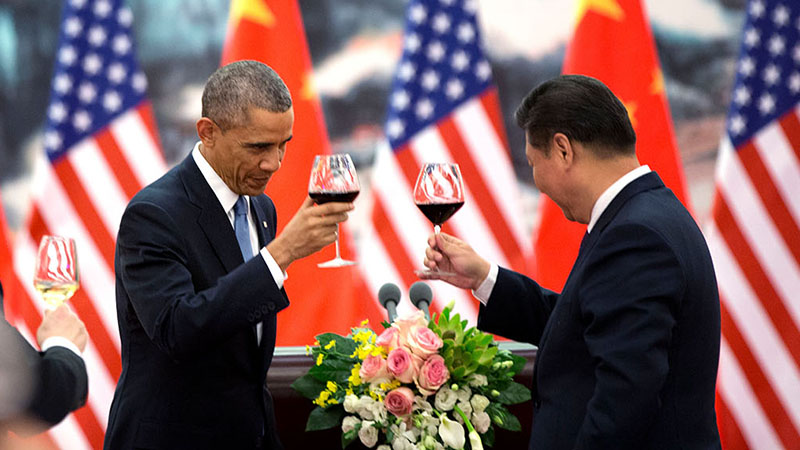 In the first of our trilogy on Barack Obama’s climate legacy, we looked at his battle of attrition at home.

A fresh-faced Obama, before his hair turned grey, rocked up to Copenhagen in 2009 expecting to clinch a world-saving climate pact. It wasn’t to be that easy.

“The Chinese were avoiding us,” Hillary Clinton, his secretary of state at the time, wrote in her memoirs. She describes ambushing the premiers of China, India, Brazil and South Africa in a secret meeting.

“Jaws dropped when they saw us. ‘Are you ready?’ said President Obama, flashing a big grin. Now the real negotiations could begin.”

Copenhagen did not live up to the hopes vested in it, ending in acrimony. It didn’t help, of course, that the US was virtually empty-handed, its cap-and-trade bill stalled. Yet Obama salvaged the basis of a future deal from the wreckage.

At that meeting, he and Clinton sketched out with Wen Jiabao the principles that would come to underpin 2015’s Paris Agreement: voluntary national targets, a common set of rules and an overarching goal for limiting temperature rise. The nationally-determined nature of the targets was crucial to both sides. It allowed Obama to bypass Congress and assured Wen China would not be bullied into anything against its economic interests.

“As we get more and more perspective, people are going to look back and really appreciate what he and Secretary Clinton were able to achieve there,” says Pete Ogden, who worked for the administration 2009-14.

That kicked off a sustained diplomatic offensive, with China – now the world’s biggest emitter – the number one focus.

China has its own drivers for putting the brakes on coal, says Greenpeace campaigner Li Shuo: concerns about health, food and energy security. But “it would be very difficult to get to what we have now” without Obama’s intervention.

“One thing that is particularly helpful was Obama to put this very high up his agenda with his engagement with China. That gets the same attention from the same level on the Chinese side as well. That level of political attention is indeed needed.”

The watchword for developing countries has long been “common but differentiated responsibility”. It is UN jargon for the idea that those who most benefitted from burning fossil fuels must cut emissions first and fastest. With emerging economies responsible for a rapidly growing share of the carbon space, though, the US and its allies were not willing to give them a free pass.

It is more than a technical matter, says Li: “How do you interpret that in a dynamic way? It is impossible to resolve that question without the highest level engagement.”

That relationship bore fruit in November 2014, when China for the first time named a date for its emissions to peak, in a joint statement with the US. Coming a year before the Paris meeting, it injected much-needed confidence in the international negotiations.

No less essential was the world’s largest democracy, a country with its fair share of US – and UN – critics. Narendra Modi came to power in India 18 months before the summit. Would he help or hinder the tense negotiations?

There were positive signs. As chief minister of Gujurat, Modi oversaw an expansion of solar power. A book under his name, Convenient Action, made the case for clean energy.

Political opponents at home argued it was unfair for India, where hundreds of millions of citizens lack access to electricity, to be expected to curb emissions. At climate talks, India negotiated with oil producers like Venezuela and Saudi Arabia in the “like-minded developing countries” bloc, frequently seen as obstructive.

“One of our biggest questions going into Paris was where India was going to land on this,” says Andrew Light, who managed relations with Delhi for the State Department 2013-16.

It is one reason why Modi’s state visit to Washington in September 2014 was returned by Obama just five months later.

“It was recognition of the deep hurdles that India faced on the ground and the political dynamics,”says Light. “Both had a deep moral commitment to this issue… These two guys recognised this in each other and it made it possible to set a firm direction to both negotiating teams.”

Behind the scenes, officials were trying to broker technical support that would allow India to meet its vast energy needs in a cleaner way. It helped Modi to develop an upbeat narrative of enterprise and progress around his renewable targets, culminating in the International Solar Alliance launch in Paris – rather than get bogged down in fruitless demands for aid.

Show us the money

Climate finance was still going to be an essential part of the deal, particularly for the poorest countries. This would be tricky. The Democrat president needed a Republican-controlled Congress to release the funds.

He showed willing, with a US$3 billion pledge to the Green Climate Fund – the largest of any country. But he only got $500m of that past lawmakers. The rest is unlikely to see the light of day.

Heather Coleman, US climate policy expert at Oxfam, says a sense that America is shirking its responsibilities lingers. “While we made good progress in the Paris Agreement, this understanding that the US is not making its fair share… that is not resolved. This president didn’t resolve that and I don’t think this president thought he could resolve that.”

All the same, Obama’s rhetoric of solidarity hit its mark. In Paris, for example, the Hawaiian-born president met leaders of small island states endangered by rising seas. “I am an island boy,” he said.

“Symbolically, in doing things like directly reaching out to island nations like he did around Paris, had an impact, a psychological impact, around the world. People felt the president understood the issues they were facing,” says Coleman.

Nor did he let up after the deal was signed.

It was thanks to Obama’s advocacy that the Paris Agreement entered into force within 11 months – a sprint compared to the 8-year marathon for its predecessor the Kyoto Protocol, which the US never ratified. He may have been convinced fellow Democrat Clinton would win the presidential election, but was cautious enough to take out insurance against a hostile future White House.

Also in 2016, Obama threw his weight behind a complementary deal to curb aviation’s carbon footprint, although airlines may have got off lightly with a carbon offsetting scheme that won’t bite until the 2030s.

And the administration worked China, India and Saudi Arabia hard to phase out super-polluting HFC refrigerants, delivering an amendment to the ozone-busting Montreal Protocol that represented a big climate win, preventing up to 0.5C of global warming.

With India digging in to protect its HFC manufacturers, Obama’s carefully nourished relationship with Modi once again paid dividends. “The Indians were the last party standing against the deal there. It was not easy,” says Light.

From Copenhagen to Paris, Obama has been a key architect of the international response to climate change. The moment he leaves office, it is in for a stress test.

Read more on: US | Obama US