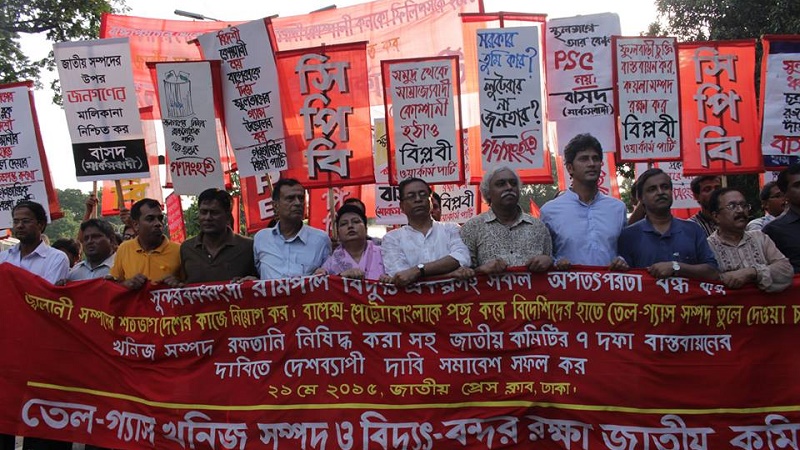 A protest against Rampal coal power station, under construction next to Sundarbans mangrove forest, a world heritage site

By Kamran Reza Chowdhury in Dhaka

He spoke about a slew of mega projects being built with the assistance of China, Japan and India, but said little about Bangladesh’s failure to expand its renewable energy sector.

Bangladesh is betting on coal to support its fast growing economy, even as other countries in Asia try to shift away from the dirty fuel amid an intensifying pollution crisis. The government hopes coal use will jump from 2% to over 50% of the Bangladesh’s electricity supply by 2022, with 23,000 megawatts of new coal powered plants in the pipeline.

“In Moheshkhali [an Island of Cox’s Bazar in the Bay of Bengal], a hub is being built to produce 10,000 megawatts of electricity [from coal]… Construction of a US$ 6 billion (1,200 MW coal-fired) power plant has started in Matarbari [in the same district near the Bay of Bengal] with Japanese assistance; we will get electricity from the Matarbari plant by 2022,” Hamid told the parliament.

The minister said a 1,320 megawatt coal-fired plant was under construction in the newly built Payra seaport, with Chinese support. Another power plant, the 1,320 megawatt Rampal project in the Sundarbans, funded by India, would start to supply electricity by 2020. Protests against this power plant have been ongoing, costing a number of lives, with another set of protests happening at the end of last month.

This amount of electricity is a little more than Bangladesh’s current total installed capacity. Bangladesh has seen a swift upsurge in electricity usage. Hamid told the parliament that daily power generation capacity has grown from 3,000 megawatts in 2009 to15,500 megawatts by 2017. Currently, 80% of Bangladesh’s 160 million people have access to electricity—up from 47% in 2009.

According to the website of the Sustainable & Renewable Energy Development Authority (SREDA) over half of Bangladesh’s electricity is currently generated from natural gas (54%) – but its gas reserves are declining and this is one of the reasons that coal is being considered. Renewable energy constitutes only 2.7% of the energy mix and coal power plants account for a paltry 1.6%. But if the minister’s plans come through, coal will account for more than half of Bangladesh’s electricity generation supply by 2022.

The failed promise of renewables

In June 2014, the Bangladeshi finance minister, Abul Maal Abdul Muhith, presented the national strategy on the energy sector in parliament. The document outlined plans to produce 800 megawatts of electricity, 5% of the total national electricity production capacity, from renewable sources by 2015. In early 2017, two years after the deadline, to produce 800 megawatts, Bangladesh has failed to meet its renewable targets, producing only 419 megawatts.

Siddique Zobair, from the SREDA told thethirdpole.net: “Yes, our plan to produce 5% of our electricity demand from the renewable sources by 2015 has not been achieved. Although we have successfully installed over four million solar home systems, we are beset with problems standing in the way of expanding the renewable sources.”

Solar power has a great deal of potential in Bangladesh. It accounts for almost 44% of power generated from renewable sources.

“But the main problem is we need vast land to install photovoltaic (PV) panels. In a densely populated country like ours, it is very difficult to find [large areas of] unused land,” said Zobair.

Shahidul Islam Khan, a professor at the electrical department at the Bangladesh University of Engineering and Technology (BUET), told thethirdpole.net that the renewable sources of energy had advantages that were often overlooked.

“Yes, availability of land is a big problem, but renewable sources can bring power to inaccessible areas. We have some excellent achievements on popularising the solar home systems in the rural areas,” Khan said. He suggested that the government might be choosing to develop coal for national energy supply, rather than for households in remote areas.

Although wind power accounts for only 0.7% of energy produced by renewables there is some hope that this will grow. The Bangladesh Power Development Board (BPDB) plans to implement a 50-200 megawatt offshore wind power project at Parky Beach area in Anwara, Chittagong.. The government and BPDB have identified 22 potential sites for wind resources in Bangladesh. The board also plans to expand on-shore wind power plants along the coastal regions of Bangladesh.

Shahidul Islam Khan told thethirdpole.net that changing direction of cyclones and storms over the last 20 years might create new opportunities.

“Twenty years ago, the cyclones used to head towards Chittagong and Cox’s Bazar (southeast of Bangladesh). But now the cyclones blow towards Odisha (in India); so we can utilise the wind for power generation,” said Khan.

To maximise the renewable potential, he said, Bangladesh could build hybrid projects that combine wind and solar. A hybrid pilot project on Saint Martin’s Island has been successful enough to supply energy needs of a little under 400 megawatts a year. Kuakata beach had potential for wind and hybrid projects.

Small hydropower could be another option.  “In the hilly areas like the Chittagong Hill Tracts, small water turbines can be used to generate hydro power,” said Khan.

In the meanwhile, the expansion of coal as a source of energy has led to some soul searching, but given its affordability, the government fears it has no choice. This may also be because the assessment of costs has not factored in health and environmental impact of this huge increase in coal production. Given Bangladesh’s vulnerability to climate change, adding more greenhouse gases to the atmosphere will lead to other hidden costs.

Furthermore, as Ashfaqur Rahman, a former Bangladeshi ambassador to China, told thethirdpole.net: “Many developed and technologically-advanced countries have adopted the policy of getting rid of coal-fired plants. But we are switching to a dirty source [coal]; we are building a coal plant near the world heritage site.”

China, Japan and other countries are selling coal technology and expertise to developing countries, although they are phasing out coal fired plants in their own countries.

“These countries are basically expanding polluting industry in developing countries, including Bangladesh. The government should be careful about it because public health and environmental issues matter. The energy is for people; people are not for energy,” he said.

Ambassador Rahman said the government should negotiate with China, Japan and other technologically advanced countries to implement the coal projects with latest technology that would drastically reduce pollution.

State minister Nasrul Hamid claimed the Rampal power plant near Sundarbans would be built with the latest technology, which would reduce pollution from coal burning, in his recent speech in parliament. This has been received with some scepticism.

Anu Muhammad, who spearheads the civil society movement against Rampal coal fired plant, told thethirdpole.net: “The government talks of best technology for Rampal power plant, but actually this is untrue”. Officials have been speaking of “ultra supercritical technology” to be used at the Rampal power plant. As has been recently reported in the Bangladeshi press, no such technology exists, and the contract specifies supercritical technology, which will not limit the limit of coal used and pollution caused – although it might lead to the generation of more electricity.

This article was produced by thethirdpole.net