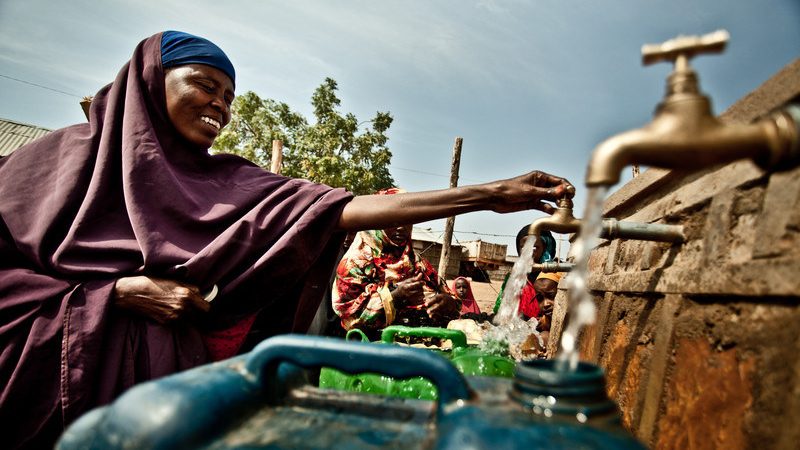 A bid for US$100 million to drought-proof Ethiopian communities has exposed a rich-poor divide in the UN’s flagship climate finance initiative.

Representatives of the US, Canada and other developed countries voiced their opposition to the funding proposal at the Green Climate Fund (GCF) board meeting in Songdo, South Korea, on Wednesday. That reflected an independent expert panel assessment it was “weak” with “little scope for innovation”.

But delegates from the developing world defended it, accusing the panel of bias. The experts and donors may prefer infrastructure and tech interventions with easily measurable results, they argued. But this programme, which encourages social and behavioural change, was designed through extensive consultation.

Tosi Mpanu Mpanu, a GCF board member from DR Congo, told Climate Home the Ethiopian contingent was fighting to the last. “It will discourage people” if they walk away empty-handed, he said. “They will definitely be a bit puzzled and bewildered, because they say ‘we are putting so much effort and manpower and resources and this is what we get’.”

The board is due to decide the fate of the proposal, along with eight others, on Thursday. A Bangladeshi scheme that was the subject of a similar row in December was quietly withdrawn, allowing the GCF to claim a 100% approval rate.

Report: How games are preparing Ethiopian farmers for climate threats

Millions of Ethiopians are on emergency food aid after the country’s worst drought in 50 years hit crops and livestock herds. Global warming is set to bring more unpredictable rains and heatwaves.

The pitch to the GCF says the project would make farmers and pastoralists more resilient with improved water supplies and farming techniques. An estimated 2.5 million people would benefit, targeting women for more than half the support.

“This is the kind of thing the GCF needs to fund; it is part of the reason we advocated for the GCF to be created in the first place,” Annaka Peterson, climate finance expert at Oxfam US, told Climate Home. Regarding the board pushback, she said: “I think there is a clear bias against projects focused on people. They are okay with making bridges climate-proof, but not poor communities.”

Ethiopia’s proposal stands in contrast to plans to refurbish a Soviet-era hydropower dam in Tajikistan. This proposal gets a high rating from the expert panel, but is opposed by NGOs for not representing the “transformational change” the GCF is meant to support. While a number of board members were critical, they stopped short of saying they would reject it.

Comment: Large hydropower dams have no place in the Green Climate Fund

Saleemul Huq, a Bangladeshi researcher into climate adaptation, expressed frustration at the barriers to support for the world’s poorest. “[The board] are putting impediments in the path of the most vulnerable and they are passing stuff that’s just routine infrastructure,” he said. “For me, this is a highly unfair treatment for communities that deserve the funding the most.”

One of the main criticisms of the Ethiopian project was its wide range of activities, not all of which were clearly climate-linked.

“There are a lot of disparate elements to it. It does not necessarily tie everything together in a really compelling way,” said Brandon Wu of Action Aid USA from Songo. “That said, it does have a more holistic approach to adaptation. It looks at different drivers of vulnerability and I think that is really important.

“My concern is that in writing off the project, the GCF might write off the whole holistic approach to adaptation.”

Money is slow to flow even for approved projects. An US$80 million grant for cyclone shelters in Bangladesh was rubber-stamped in November 2015, the GCF’s first tranche of approvals. Not a cent has been disbursed, according to the GCF website.

The Green Climate Fund started out with $10 billion of pledges from governments to help poor countries meet their climate goals. Donald Trump is threatening to axe the US’ outstanding $2bn donation, leaving $8bn to play with.

It is not a cash shortage but a lack of viable proposals that has proved the sticking point. In 2016, the Fund fell short of its goal to allocate $2.5bn, getting $1.3bn worth of projects through.

The board, evenly split between donor and recipient countries, is under pressure to get money flowing at the same time as it develops the funding criteria.