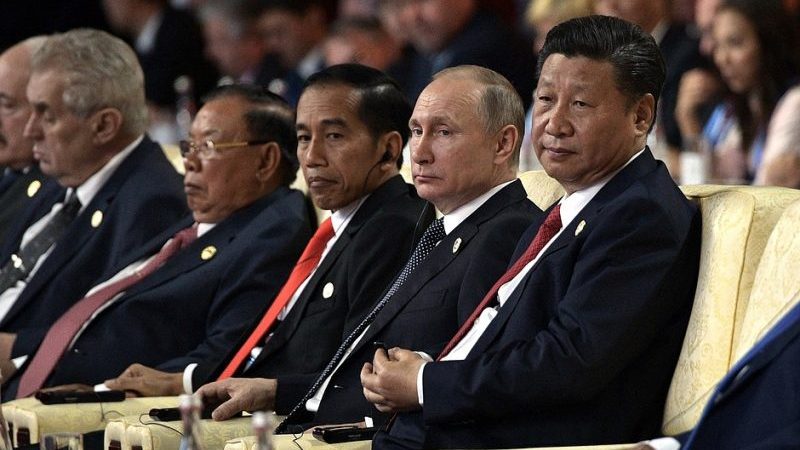 Launching the first ever “belt and road” forum in Beijing with 29 government leaders in attendance, president Xi touted a $900 billion infrastructure push abroad.

He proposed to establish “an international coalition for green development”, support adaptation to the impacts of climate change and boost science cooperation.

“We need to seize opportunities presented by the new round of change in energy mix and the revolution in energy technologies to develop global energy interconnection and achieve green and low-carbon development,” said Xi.

Sunday’s summit represents the latest Chinese move to own the globalisation agenda as rival superpower the US retreats into protectionism. It builds on themes set out in Xi’s pivotal speech to the World Economic Forum in Davos this January.

China leads the world in mass production of solar panels and other clean energy technologies, a growing export market. At home, mounting concerns about air, water and soil pollution have prompted a clampdown on coal mining and burning.

At the same time, it is the world’s biggest investor in coal power development overseas, which threatens to bust international climate goals.

A report published this month by the Global Environment Institute (GEI) showed China is involved in 240 coal-fired projects totalling 251GW across the “belt and road” countries. That figure includes 52 in planning stages and 51 under construction, as well as those built since 2001.

Between 2013 and 2015, the report shows, Chinese investment in overseas coal projects surged to fill a gap left by western institutions, such as the World Bank, pulling back. That was followed by a slowdown in 2016, which GEI suggests could reflect a shift to clean energy following the 2015 Paris climate deal.

“Given the mounting opposition of the international community to new fossil fuel infrastructure and the trend towards accelerated energy restructuring, the risks associated with these projects may also increase,” the report warns.

While not directly addressing the impact of coal in his speech, president Xi called for innovation to promote “a way of life and work that is green, low-carbon, circular and sustainable”.

Participating leaders in Beijing from countries including Russia, Turkey, Chile, Malaysia, Pakistan and Ethiopia signed a communiqué on Monday. Reinforcing Xi’s message, it called on all parties that ratified the Paris climate agreement to implement it in full.

Li Shuo, climate policy advisor at Greenpeace East Asia, said this sent a clear signal to US president Donald Trump as he considers pulling out of the Paris Agreement. “While China is taking an active stance on the global stage, a move to weaken the global climate regime will alienate the US,” said Li.

Many high-level delegates praised China’s outreach, but India was notable by its absence. Narendra Modi’s government issued a statement questioning the environmental and financial sustainability of China’s overseas investments.

Green groups welcomed Xi’s rhetoric, calling for transparency around Chinese companies’ environmental impact abroad to back it up.

Ahead of the summit, Greenpeace campaigner Yixiu Wu said: “Given that more than half of China’s outbound investment is in the energy and infrastructure sectors, the belt and road initiative is an opportunity for China to play a leading role in the transition from fossil fuels and toward renewable energy. Prioritising sustainability will cement China’s legacy as it assumes a larger role on the global stage.”