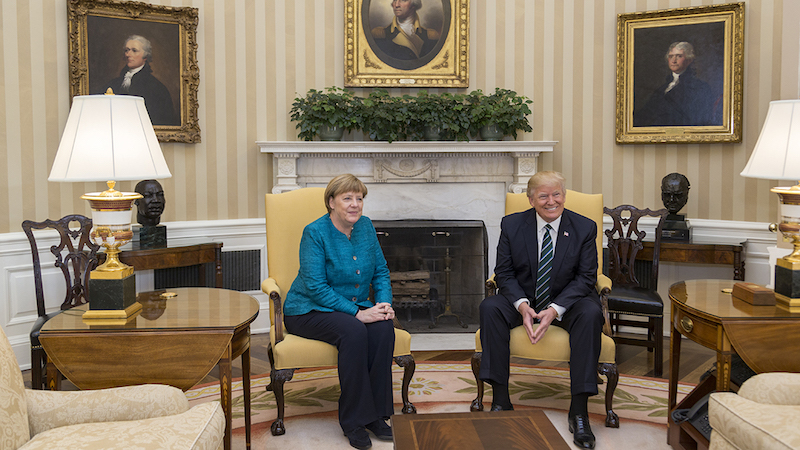 Germany’s G20 presidency dramatically weakened a climate action plan, gutting it of ambitious language and defining gas, and potentially even some coal power, as “clean technologies”, in an attempt to appeal to US president Donald Trump.

The action plan was intended to be agreed at next week’s Hamburg G20 summit. Climate Home has seen two versions, drafted in March and May of this year. The latter shows the degree to which the German presidency has bent to the will of the Trump White House.

Several elements that have been removed in the May draft are:

“The US massively weakened the language in the energy part of the action plan,” one source with knowledge of the negotiations said. “It pushed for references to so-called ‘clean’ fossil fuels and made it less explicit that the energy transition has to be built on energy efficiency and renewables.”

“It also provided cover to some other G20 members – such as the Saudis and Russia – to weaken some climate sections of the document, including the pledge to phase out fossil fuel subsidies.”

Climate Home understands from several well-placed sources that the May text is the latest version of the plan. Diplomats will try to thrash out some form of compromise on the action plan before next Friday’s summit. But German government sources say that it is currently unclear whether it will even be published.

US officials may find the Germans are now less pliable. Since the document was drafted, the political landscape has shifted, with president Donald Trump announcing his intention to withdraw the US from the Paris deal early this month.

Trump’s speech was sharply criticised by German chancellor Angela Merkel, whom Trump will face at her home G20 in Hamburg. Climate is expected to be a major source of tension between the two. On Thursday, Merkel said Trump’s decision to withdraw from the Paris accord had made her “more determined than ever” to make the G20 a success.

“The world’s citizens will look for a strong message from the G20,” said Laurence Tubiana, CEO of the European Climate Foundation and France’s climate envoy to the Paris climate talks. “The G2O countries and all governments beyond them, should stand firm in their backing of rapid implementation of Paris agreement. We must accelerate action as we are running late, and prepare the long term low carbon strategies that allow us to fulfil the Paris goals.”

Report: G7 split as leaders issue climate statement without US

The latest version of the draft action plan refers to “clean technologies such as energy efficiency, renewable energy, natural gas and nuclear power, for those countries that opt to use it, and advanced and cleaner fossil fuel technologies”.

These latter could include gasified coal projects such as the cutting-edge but unprofitable $7.5bn Kemper plant in Mississippi, whose operations were suspended yesterday. They could also include carbon capture and storage initiatives, such as the ROAD project in the Netherlands, which Engie and Uniper also pulled out of yesterday.

If the drafts are agreed in this form, the admission from the international community that coal projects can be considered clean would be a major diplomatic victory for Trump, who has championed US miners, to parade back in the US.

The latter document is dated 5 May and includes a footnote making clear that the US was reviewing its climate policies and reserved its position. Sources say that the US failed in its attempt to introduce a ‘ratcheting down mechanism’ on climate funding into the text.

Patricia Espinosa, the executive secretary of the UNFCCC said that she still hoped for the survival of a statement in the action plan that would put climate at the centre of funding deliberations of development banks, such as the World Bank and Africa Development Bank.

“If they were to ensure that all funding decisions had to go through a ‘filter’ that referred to climate risks and the resilience we need to build into societies, that would be great and very helpful,” she told Climate Home.

Espinosa added that she had not spoken to Trump since his election, but hoped for an opportunity to do so soon. “I would certainly ask him to reconsider his decision on the Paris Agreement,” she said.

In other G20 negotiations, a wrangle over references to the Paris deal in the main leaders’ communique is proving no less contentious. Similar discussions at the recent G7 meeting in Italy ended in a split, with the US allowed to stand alone while other leaders expressed their support for the agreement.

Germany’s environment secretary Jochen Flasbarth told Climate Home: “The implementation of the Paris Agreement remains a central issue of the German G20 Presidency. We want the leaders’ summit to send a clear signal on implementation.”

No meeting of the minds is expected though. “There are no negotiations anymore,” one German government source said. “Negotiations are done.”

“At this stage, we have kind of exhausted our persuasive potential,” added Maros Sefcovic, the EU’s energy commissioner, who had pleaded with the Trump team not to leave Paris.

When Trump made his Rose Garden address on the Paris deal this month, he said he may be open to “renegotiating” the deal.

“We are 100% convinced that it is not time to renegotiate Paris, but to implement it,” said Sefcovic.

Despite the formal impasse, Climate Home has learned that contact continues between top European officials and White House staffers who fought for the US to remain within the Paris deal.

An EU source said: “The exchanges are happening frequently – a couple of times a month – at director level or above in the European commission, involving senior civil servants.”

Contacts have been plagued by a lack of clear lines of rank and accountability but sources confirmed Gary Cohn, a former Goldman Sachs executive now heading Trump’s National Economic Council and David Banks, a special assistant on international energy and environment, had been in regular contact with the EU.

Banks advised president George W. Bush on climate after the US left the Kyoto Protocol and is credited with keeping the country involved in climate diplomacy through the Major Economies Forum. Along with Cohn and the US secretary of state, Rex Tillerson, he has argued for staying at the climate talks table, despite viewing the Paris pact as economically disadvantageous to the US.

Sefcovic confirmed that informal talks were continuing. He also said he had taken meetings with Cohn and Banks in the lead up to Trump’s speech on the Paris deal.

Diplomacy has been complicated by Trump’s decision to leave scores of senior state department positions unfilled, and by idiosyncratic decision-making and communication processes .

“Our biggest difficulty is understanding where the US government is at,” an EU source said. “It’s not so much predicting their next move as understanding the logic of where they’re moving and that’s hard.”

Even so, “there is absolutely a reason to keep talking to the US,” one senior Obama-era staffer told Climate Home. “It would make it easier for the US to re-enter [Paris] and that is in the rest of the world’s interests because without us, China exerts too much influence and you have the potential for a lot of backsliding.”