May meets Trump on climate, but her Brexit will damage the Paris accord

Comment: Despite May’s G20 overture to Trump, her government is preparing a divorce from the EU that will have profound negative consequences for the climate 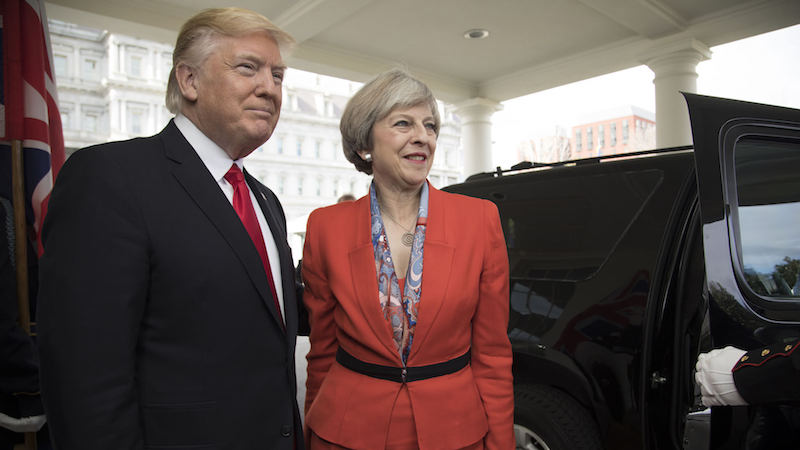 Donald Trump and Theresa May are set to meet in Hamburg on the sidelines of the G20 summit being held on Friday and Saturday (Photo: White House)

UK prime minister Theresa May will reportedly champion the Paris Agreement on climate change when she meets Donald Trump this weekend at the G20 summit in Hamburg.

As she does, it is worth bearing in mind that, in the wake of the US president’s decision to pull out of the Agreement, the UK’s divorce from the EU is the last thing the international community needs.

Brexit could have a profoundly destabilising impact on global momentum to address climate change; and the harder the Brexit, the greater the magnitude of these potential repercussions.

The negative consequences, according to a new report I authored for the Dublin-based Institute of International and European Affairs, ripple out from the loss of UK influence at the EU negotiating table. The EU has traditionally offered leadership in global efforts to address climate change, and together with China is now the glue holding the increasingly fragile Paris Agreement together.

Within the EU, the UK has historically been a key engine of strong climate policy, aligning itself to the clean and green grouping of Member States, including Germany and the Nordic countries.

The UK has consistently taken on more than its fair share of the collectively agreed EU decarbonisation objectives. This was the case for the Kyoto commitment period between 2008 and 2012, and in the post-Kyoto period that we are in currently. Most importantly, the UK is pencilled in for a significantly above average share to the EU’s pledge to the Paris Agreement, a 40% reduction in emissions by 2030.

The UK has also been a strong supporter of the EU’s flagship climate policy, its carbon trading scheme, which covers over 45% of all heat trapping emissions from 31 countries. The scheme has flagged badly in recent years, with carbon prices hovering around €5, far too low to promote low-carbon investments. To drive up the price, the UK called for the EU to permanently cancel a large number of the surplus carbon credits, going well beyond other reform proposals on the table.

The so-called Visegrád grouping of Eastern European countries, led by Poland, has frequently opposed the UK’s ambition and reform proposals.

The ‘hardness’ of the final Brexit will determine the magnitude of the repercussions. In a soft Brexit scenario, where the UK chooses to remain in the EU’s single market (which enables frictionless trade of goods and services), membership of EU’s carbon trading scheme would likely be retained. However, the UK would withdraw from the collective EU approach to agreeing and sharing climate targets. This would remove UK influence at EU negotiations, tilting the balance of power towards the less ambitious grouping of member states. EU leadership and ambition would suffer.

In a so-called hard Brexit, where the UK leaves the single market and the customs union, the UK would likely withdraw from the EU’s carbon trading scheme, and its influence on the EU’s climate policy would therefore be further diminished.

In both soft and hard Brexit, a revising downward of the EU’s pledge to the Paris Agreement would likely be required. This is because the UK contributes disproportionately to the overall EU pledge, and other Member States are unlikely to want to take up the slack post-Brexit. This would have a destabilising impact on the Paris Agreement.

In what might be termed an ultra-hard scenario, where the UK seeks to gain competitive advantage through deregulation following a hard Brexit, the situation gets worse. In this case, the UK would be unlikely to submit an ambitious national pledge to the Paris Agreement, if indeed it submitted a pledge at all. The stability of the Paris Agreement could be threatened.

While ultra-hard Brexit might be considered unlikely, it should not be entirely discounted. A key perceived opportunity from Brexit, and part of its inherent driving logic, is cutting EU “red tape” with a view to gaining competitive advantage for the UK economy. Cutting climate regulations, such as environmental standards for buildings, cars, and appliances, is a clarion call of the powerful right-wing UK press, and might prove too tempting to resist.

Somewhat counterintuitively, in most scenarios, the implications for the UK’s national climate policy are limited. This is because the UK’s climate ambition is underpinned by domestic legislation such as the Climate Change Act (2008), and is not a function of EU Membership per se. The exception, of course, is the ultra-hard Brexit world, where the UK rolls back its domestic climate policy following a hard Brexit. In this scenario, there are profoundly destabilising impacts on decarbonisation momentum at all levels: within the UK, and at EU and UN fora.

In most policy spheres, the UK will be disproportionally negatively affected by its decision to leave the EU, be it in trade, foreign policy or security. However, when it comes to climate change, under most Brexit scenarios the most profoundly negative consequence and not felt by the UK, but by the EU and internationally.

The only scenario where there are no negative or destabilising forces for climate protection is where the partners patch up their differences, and the UK decision to leave the EU is reversed. Like ultra-hard Brexit, this might be considered somewhat unlikely. On the other hand, negative news could drive civil society opposition to Brexit as the full economic, political and regulatory implications become clearer over the coming year, and the fallacy of having one’s cake while also eating it is exposed.

The US could also eventually revoke its decision to withdraw from Paris, although that would likely require another federal election. No matter how unlikely, one can always hope.

Joseph Curtin is a research fellow for climate policy at the Institute of International and European Affairs and at University College Cork, and a member of the Irish Government’s Climate Change Advisory Council. Opinions expressed are the author’s alone.