Despite warm words about protecting the vulnerable, the island presidency of this year’s UN climate talks is showing no urgency on “loss and damage” 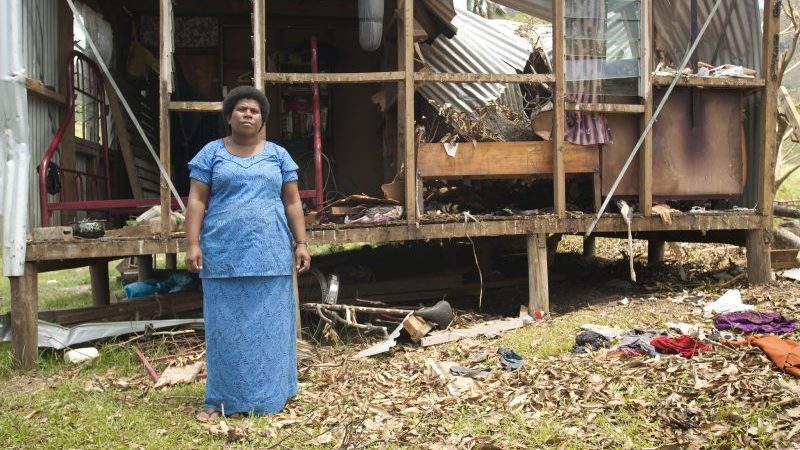 By Makereta Waqavonovono in Suva and Julie-Anne Richards in London

When the strongest tropical cyclone to make landfall in the southern hemisphere struck the Fiji Islands on the afternoon of 20 February 2016, I was in my apartment in Central Suva.

There was no power; the electricity authority had switched it off earlier in the day in anticipation of strong winds blowing trees and branches onto power lines.

Although fortunate that Cyclone Winston struck during daylight hours and bypassed the heavily populated areas of the two main islands, for a small island developing country, the impact was devastating. 45 people were killed – including my much-loved neighbour in the flat above. Rooftops of houses, schools, churches  and other structures were blown away, leaving thousands homeless. Villages and communities were leveled out, plantations destroyed, water sources contaminated and trees and electricity lines downed, cutting off power to 80% of the nation’s estimated 867,000 people.

After the storm had passed, we counted the counted the cost: 350,000 people affected, 31,000 homes and 229 schools lost or damaged. More than a year later, some villages and children are still being housed and schooled in relief tents and makeshift shelters. Total damages from TC Winston have been estimated at US$1.4billion (FJ$2.98billion), 30% of Fiji’s GDP.

More intense storms are just one of the impacts of climate change hitting Fiji. Communities are also battling floods, encroaching tides and salination due to sea level rise. Prime minister Frank Bainimarama says more than 800 communities and 40 settlements need to be relocated to higher ground. Households in Vunisavisavi and Wailevu and entire coastal villages in the north of Vunidogoloa and south of Narikoso have already moved.

The international community agreed to provide support to address loss and damage. This is where the next climate summit in November, the first led by a small island nation and dubbed the “Pacific COP”, has an opportunity to make real progress.

Yet we see a distinct lack of urgency. There are no fewer than six roundtables planned between now and COP23 to progress the Paris Agreement, but not one focuses on loss and damage. It does not feature explicitly in the priorities of the Fiji presidency and at a recent Climate Action Pacific Partnership event loss and damage was removed from the climate action agenda and was not picked up by the Pacific small island leaders in their statement from CAPP, despite being on their initial draft.

This is at odds with the emphasis placed on loss and damage by developing countries at Bonn interim talks in May, where a higher profile was demanded, as was “balanced progress” across all the elements of the Paris agreement (including mitigation, adaptation, loss and damage and finance). It is at odds, too, with strong statements made by the Fiji presidency about the impacts of climate change.

It’s possible the blockage reflects the old status of loss and damage as the “problem child” of the negotiations – too political to deal with. But the Paris agreement, by reiterating the need to provide international support (or finance) to deal with loss and damage, in a collaborative way not based on compensation or liability, overcame much of the difficult politics. It is now a matter of putting the Paris agreement into action and making sure loss and damage doesn’t languish on the sidelines while other issues, more important to rich countries, make progress.

There are some clear pathways to do this. The Fiji leadership could declare this a “climate impacts COP” and dedicate a series of days to loss and damage solutions. The pre-COP meeting to be held in Denarau, Fiji in October, or the UN General Assembly in September, offer opportunities to begin the discussions in the lead up to the COP.

The Fiji-led climate summit could agree an unequivocal mandate to develop international finance for loss and damage – including from “polluter pays” sources that are currently un- or under-taxed such as a fossil fuel levy, or international aviation and maritime levies – ensuring that the communities and countries most in need will be able to access the finance simply and easily.

This money might go toward subsidising climate insurance, it might help communities recover from severe storms and floods, or develop new livelihoods when their farming or fishing livelihoods are no longer viable due to climate change. It might provide funds to help communities relocate when there are no other options available to them.  International finance will be crucial to ensure Pacific communities can fight the worst impacts of climate change.

The Pacific COP will be a challenging COP: progress is crucial, but there are few actual deadlines. These COPs have a tendency to “tread water” and not achieve much. However, much like in Paris and in Warsaw, a successful outcome on loss and damage can help drive achievement of other key elements as well – in fact it might be essential to the Fiji COP presidency leaving a meaningful legacy for the Pacific.

One thing is for sure, there is no shortage of need for loss and damage finance, and the Pacific COP offers the ideal opportunity with high expectations from countries, as well as a moral imperative, for great strides forward on loss and damage.

Makereta Waqavonovono is a legal practitioner and adviser with extensive experience in the Pacific. Julie-Anne Richards is an independent consultant on climate change, loss and damage and the UNFCCC.