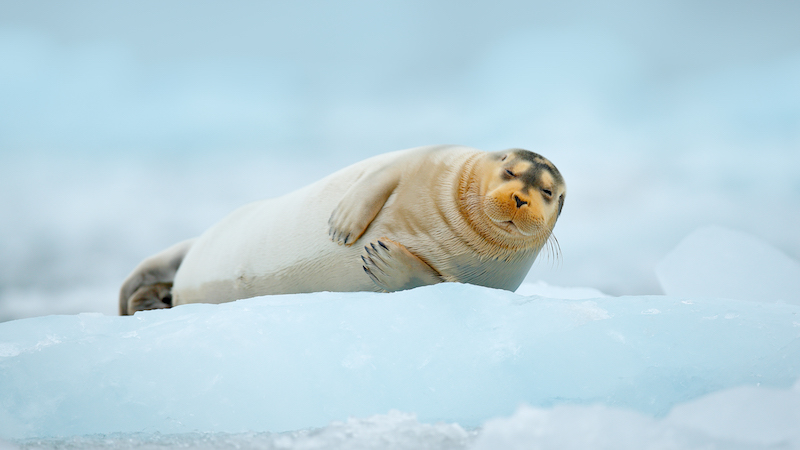 Sea ice floes are key habitat for bearded seals and ice retreat threatens the survival of the species, according to wildlife authorities (Photo:Deposit Photos)

By Sophie Yeo in Chicago

As the Supreme Court reconvened on Monday, Donald Trump’s commerce secretary Wilbur Ross was the unlikely principle defender of climate science and an Arctic seal.

The case, which oil companies want justices to hear, challenges a 2012 listing of the Pacific bearded seal as threatened due to climate change.

Ross inherited the long running case from Barack Obama’s administration, which successfully saw off legal challenges in lower courts. But wildlife advocates fear a u-turn, given US president Trump’s antipathy towards science-based decisions made under Obama.

News on Wednesday that the administration had reversed a finding that walrus were threatened by climate change seemed to confirm those fears.

Oil companies, native Alaskans and the Alaskan government were unhappy when the National Marine Fisheries Service (NMFS) listed the Pacific bearded seal as threatened under the endangered species act (ESA), due to projections that climate change could erase its habitat by 2095.

Branding the decision “literal nonsense”, they are hoping to take the case to the Supreme Court in order to have the decision overturned. The court must now decide whether to hear the case. Both sides have been given until 27 October to make their arguments.

The documents due to be filed this month should reveal how the new administration plans to handle an awkward clash of priorities. If the government decides to defend the listing against these groups – as it did in lower courts during the previous administration – it will mean standing by the National Oceanic and Atmospheric Administration’s (Noaa) assertion that long-term climate change is a threat to the habitat of the bearded seal.

This would be contrary to most actions Trump has taken on climate change since taking power – including pressure on officials of various departments to cleanse their programmes of “the double-C word”. Ross, who is the chief defendant in the case because the scientific agency Noaa sits within his department, supported Trump’s decision to leave the Paris Agreement.

Kristen Monsell, who is representing the Center for Biological Diversity (CBD), an intervenor in the case, said that the government might try to avoid fighting the case by dissuading the court from considering it.

“What could happen is, if the government is reconsidering the listing of the bearded seal they could indicate that in their response to the court as a reason of why it’s not worthy of Supreme Court review,” she said.

Tammy Olson, a biologist at NOAA who worked on the listing for the bearded seals, said: “NMFS does not comment on ongoing litigation, so I can’t discuss what NMFS’s response will be.”

This will be the first time that the case has been heard in Trump’s America, with the appointment of Supreme Court justice Neil Gorsuch swinging the balance of power in favour of conservativism.

“We definitely think we’ll have a better chance than we had on the Ninth Circuit [Court of Appeals], but then it’s difficult given Gorsuch’s relative newness to the Supreme Court to have any sense of how he may see environmental issues,” said Josh Kindred, environmental counsel for Alaska Oil and Gas Association, one of the organisations challenging the listing. Association members include majors BP, Shell, Chevron and ExxonMobil.

“There are legal but also scientific issues at play here, so it’s difficult to predict how a panel would view this.”

The world’s major conservation body, the International Union for the Conservation of Nature (IUCN), currently lists the bearded seal as a species of  “least concern” and notes populations are still in the hundreds of thousands. But the IUCN does recognise climate change is “very likely” to negatively impact the seals in decades to come.

This echoes the determination of Noaa scientists that a reduction in Arctic sea ice would deplete areas for nursing, rearing and moulting, leading to declines. The US endangered species act provides different listing criteria to the IUCN. To list a species as “threatened”, the agency must determine that the creature in question is likely to become endangered in the foreseeable future.

Those opposing the listing say that impact of long-term climate projections on bearded seals are pure speculation, and it could have a serious impact on Alaska’s economy, offshore drilling and the rights of native people.

They have also warned that, if the case succeeds, it could set a precedent that would open the floodgates to many more species being listed under the endangered species act unnecessarily and prematurely. The Alaskan government pointed to a recent study suggesting that one in six species may be threatened by climate change in the future.

“Listing a now-healthy species on that basis opens the door to almost unfettered future listings of myriad species, each of which will result in heavy burdens on a local human population,” the state government wrote in their petition to the Supreme Court.

The Alaska Federation of Natives, which is also challenging the listing, even suggested that protections for the seal could become a national security threat, creating burdensome regulations that could prevent the construction of infrastructure and strategic military assets necessary for protecting the Arctic in the face of future geopolitical tension in the region.

Those who support the listing say that the impacts would be far more limited.

In particular, the ruling does not prevent the capture or hunting of the bearded seals, as this was not deemed to be a significant threat to their populations. In addition, the endangered species act contains exemptions for Alaskan native groups when it comes to taking species for subsistence.

CBD suggests that a ruling in their favour could make it easier to list certain species as threatened – such as the walrus, pika and wolverine. But the suggestion that this case would lead to a flood of premature listings is an exaggeration, says Monsell.

“The agency isn’t listing every single species. They’re analysing how the species will react to various threats based upon the best available science,” she said, highlighting how the agency had simultaneously declined to list the Atlantic subspecies of the bearded seal because it didn’t meet this scientific threshold.

The Supreme Court only hears a fraction of the petitions that it receives each year, and declined to consider a similar case challenging the listing for the polar bear even while Gorsuch was on the panel.

While the original ruling is likely to stand, a question mark hangs over how government agencies will treat the listing of animals threatened by climate change under the endangered species act in the future. In particular, a listing of the walrus is expected soon, and providing a further test of how the Trump administration will deal with the climate threat to species.

“If the agency follows the science, we think it’s clear they need to list the species, but we also know that this is an administration that doesn’t follow the science,” said Monsell.

“That’s a huge concern for the walrus, the bearded seal and other species that are threatened by climate change but might not get the protections they need, because the administration is beholden to the industry and has blinders on when it comes to the science.”