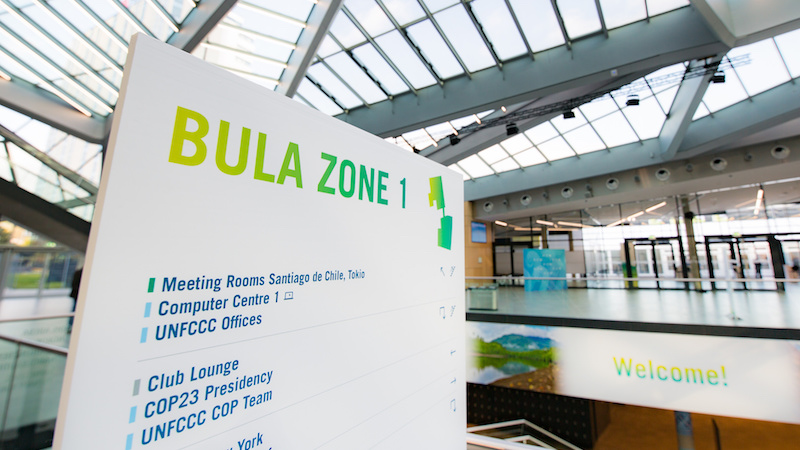 The US will host a meeting with energy industry representatives at the Bonn climate talks next week (Photo: UNFCCC)

By Arthur Neslen in Bonn

Some countries attending UN climate talks in Bonn hope a Trump administration fossil fuels presentation will provide an opportunity to strike coal technology deals with the US.

African diplomats told Climate Home News that talks on technology trades were “very possible” on the fringes of the US event on Monday.

The following day, Ukraine is planning to table an initiative to bring energy corporates closer to the UN climate process, which it claims has US backing.

The proposal would slot energy multinationals into an “intermediate layer” between the UN Framework Convention on Climate Change (UNFCCC) and national governments. It has been encouraged by US officials and coal firms, its authors say, and will be raised by Ukraine’s environment minister Ostap Semerak on Tuesday.

Industry executives and Obama-era climate negotiators say that pushing US coal into the heart of the UN negotiations could offer president Donald Trump political cover to reverse his plans to exit the global climate treaty, should he choose to do so.

The White House and US state department co-organised the side meeting, which is titled: “The Role of Cleaner and More Efficient Fossil Fuels and Nuclear Power in Climate Mitigation”.

Barry K Worthington, the director of the US Energy Association and a high profile speaker at the event, was unequivocal when asked if striking fossil fuel trade deals was an objective of the meeting.

“For sure,” he told Climate Home News. “We in the US are very dedicated to increasing our fossil fuel production and exporting to other countries. The flavour du jour is LNG but we’re also exporting crude oil and derivative products and continue to export a sizeable volume of coal.”

Benjamin Sporton, director of the World Coal Association, said there were “a lot of conversations going on” about US lower-emission coal technology transfer deals, which could get a boost from the event. Pakistan, Ghana, Nigeria and Ukraine were likely candidates for such deals, he said.

Ghana has been living with an energy crisis since a drought associated with climate change hit hydro power generation in the country, bringing routine power outages.

Wisdom Ahiataku-Togobo, the Ghanaian energy ministry’s renewable energy director, said talks about coal technology transfer deals with the US at the climate summit were “very possible, because the Volta River Authority [Ghana’s largest energy company] is prospecting for these options”.

“We are looking at clean coal options and if it comes out as more cost-competitive, why not?” he said.

Report: One in seven coal power plant owners are heading for the exit

According to Seyni Nafo, the chair of the Africa group of climate negotiators, some African nations are turning to coal after struggling to access finance for renewable energy.

Any African country with coal deposits would be tempted by the prospect of electrifying rural areas of their country with relatively less-emitting coal technology, he added.

A former state department official, who is in Bonn, was doubtful that the talks would be used as a vehicle for trade deals. If that had been Trump’s objective, US engagement would have started earlier and US negotiators would have been more visible on the ground, they said.

However, an obscure Ukrainian proposal raised this week during a backroom meeting of negotiators could formalise access to the heart of the UN climate process for companies that want to sell coal technology.

The ‘Committee for Future‘ will “enhance public and private sector participation” in national climate policies, according to a low-on-detail powerpoint presentation made by Taras Bebeshko, an advisor to the Ukrainian energy minister. He told Climate Home News it was envisaged as a way of bringing US energy majors and other non-state actors to the UN table.

Presentation From Ukraine Art 6.8 by Karl Mathiesen on Scribd

Diplomats confirmed the initiative had been raised with the US and received a “positive” response.

“We are in permanent contact with the US delegation in the negotiating process through the umbrella group,” a Ukrainian source said, referring to a bloc of non-EU developed countries.

Ukraine began importing coal from the US earlier this year after losing control of key mines in a separatist conflict.

American corporates have expressed an interest in the proposal’s “integrated climate partnerships” which would form an “intermediate layer between the global UNFCCC and national [climate plans and] allow direct participation of the corporates,” a Ukrainian source said.

“Within this structure I can clearly see in-depth cooperation with corporations,” the source continued. “If they could bring proper [coal] technology that would allow us to do that, it would be brilliant.”

Climate Home understands US coal giant Peabody, which the US is bringing into the heart of the talks in Bonn, has expressed an interest in the initiative. The company did not answer questions regarding contact with the Ukrainians, saying only that: “We are all about technology to reduce carbon dioxide emissions. That includes high-efficiency, low-emission coal-fuelled generation today and carbon capture over time.”

Most scientific models depend on carbon capture and storage to contain global warming below catastrophic levels, but the technology has struggled to succeed commercially.

While more efficient coal could provide immediate reductions in CO2 emissions in countries that rely on the fuel, the notion that coal can be considered “clean” has been disputed by studies showing that use of the lowest emitting coal plants would rule out meeting the Paris 2C warming limit.

But the US coal industry remains a cornerstone of Trump’s base. In his Rose Garden speech announcing an exit from the global climate pact, the billionaire tycoon enthused: “I happen to love the coal miners.”

Trump also claimed that the Paris Agreement “blocks the development of clean coal in America”, but said he would re-enter the treaty if “terms that are fair to America” could be agreed.

Comment: It is time for the UN climate process to tackle fossil fuel supply

World leaders have made clear the Paris deal is not up for renegotiation. But 24 countries mentioned efficient coal technology in their national contributions to the pact, leaving scope for trade deals.

“There is obviously a need to address the concerns that president Trump expressed,” Sporton said. “An inclusion of lower emission fossil fuel technologies and greater recognition of what they can achieve in terms of the Paris Agreement would no doubt help to keep the US in [Paris].”

The Obama-era climate negotiator said trade deals could provide “political cover” for staying in. “All they [Trump officials] can do is revise down their [national climate targets],”he said. “If they want to put in more about [pledges] and a bunch of announcements about what they’re doing with fossil fuels to make it seem like less of a capitulation, fine.

“But staying in the four walls of the Paris Agreement doesn’t require them to come up with a series of announcements. They would just do it for optical reasons.”