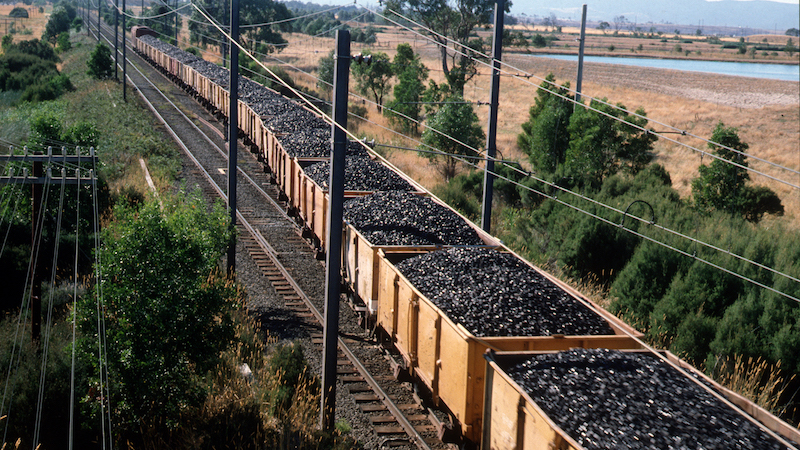 A train line will be needed to ship coal to the coast from the Galilee Basin (Photo: CSIRO)

By Sophie Vorrath for RenewEconomy

The prospects of the mega coal mine and rail project planned for Queensland’s Galilee Basin by Indian giant Adani have taken a fresh hit, after listed Australian freight company Aurizon said it was no longer seeking federal funding to build the project’s rail line.

Aurizon said on Friday that it would be withdrawing its application for funding under the Northern Australia Infrastructure Facility, or Naif, due to a failure to secure “definitive contractual arrangements with any proponent”.

Aurizon was seeking the federal funding to assist with a rail solution for the Carmichael coal mine, a crucial ingredient to opening up the remote Galilee Basin to a potentially huge coal mining and export project that has also caught the attention of Gina Rinehart’s GVK Hancock and Clive Palmer.

In a company statement released on Friday, Aurizon chief Andrew Harding said the company still supported the development of the new Queensland mega mine, but decided it was prudent to withdraw the Naif application in light of the project’s current failure to progress.

“If market circumstances change and our discussions with potential customers progress to commercial arrangements we will look at all possible financing arrangements to develop the rail solution,” Harding said.

Australia: Labor victory a ‘death knell for Adani’ coal mine

The decision by Aurizon delivers a fresh vote of no confidence to the Adani-led project, which has stumbled from roadblock to roadblock, despite having the in-principle support of the federal government and key Queensland Coalition MPs.

Chief among those roadblocks has been the increasing number of banks – both international and local, including Australia’s big four – that have ruled out backing the project, for both economic and environmental reasons.

Most recently, in December last year, Downer Group announced it had relinquished a proposed $A2 billion non-binding Letter of Award received in December 2014.

This followed on from the Queensland government delivering its veto of the proposed A$1 billion loan subsidy and a multitude of leading Chinese banks vowing to avoid the controversial project the week before.

And late last month, in an address to the National Press Club, Labor opposition leader Bill Shorten undermined the project’s prospects further, by pledging it would not receive the party’s support if it didn’t stack up commercially or environmentally.

“Aurizon has joined a long list of banks and services companies walking away from the Adani project,” said Greenpeace Australia Pacific climate and energy campaigner Nikola Casule, in comments on Friday.

“There is no question that this mine would be an environmental disaster and Aurizon’s announcement is another clear demonstration of the economic unviability of the project.

“If Bill Shorten is standing by the criteria he set only a week ago he must commit to blocking the project should he lead a future Labor government,” Casule said.

“Aurizon’s decision reflects the wider public sentiment, which has become increasingly hostile amid revelations of the Adani Group’s tainted environmental and corporate record.

“While this news is welcome, the battle is not over. Greenpeace Australia Pacific and the Stop Adani movement will continue to take the fight to Adani and its enablers until this nightmare of a project is dead and buried.”

This article was originally published on RenewEconomy.