Brexit-bound UK won big concessions for power stations that burn wood, while new research claims the technology will undermine carbon cuts for half a century 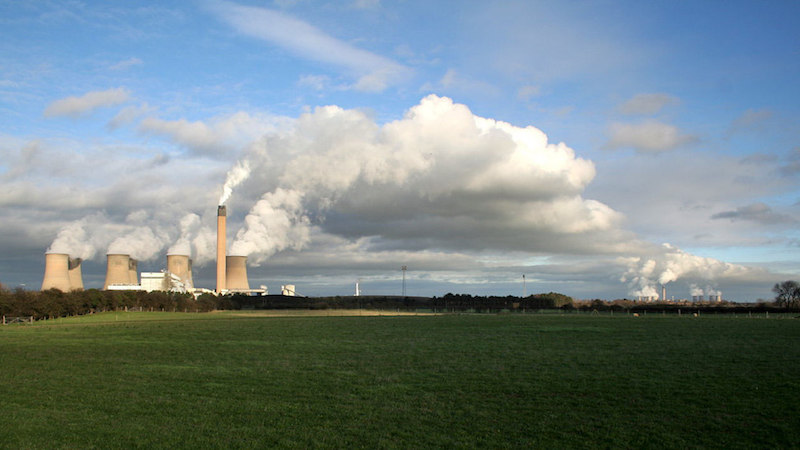 Both Eggborough (near) and Drax (far) in the UK have converted their coal burners to biomass (Photo: Alan Murray-Rust)

The British government pushed to weaken EU controls on biomass energy in December, even though the technology will undermine efforts to contain global warming for up to half a century, according to research released today.

Despite its imminent Brexit, the UK successfully rewrote a proposal to almost quadruple the potential size of wood burning plants before they had to meet efficiency criteria, according to documents obtained by Unearthed, and shared exclusively with Climate Home News.

The win for Whitehall’s lobby offensive – in alliance with Poland and Spain – was pushed through in a ministerial revision to the renewable energy directive in December.

Shortly before it was approved, a group of high profile climate scientists warned the directive’s biomass articles were “a critical flaw” in the proposal, and would accelerate climate change.

This was because the proposal tolerated the cutting down and burning of whole trees, a process that releases more CO2 into the atmosphere than replanted trees can absorb for decades, if not centuries.

Greenpeace’s chief UK scientist Doug Parr told CHN: “The UK government knows this energy source could backfire and has cooled on providing fresh subsidies, yet they are trying to lobby the EU to make it easier to burn more wood. If ministers really want Britain to be a climate leader, they should back unambiguously clean renewable technologies like solar and wind that really help tackle climate change.”

The directive still needs to be approved by the European Parliament, Commission and Council in a trilogue process that could take up to a year.

Campaigners say that if it is accepted, the UK proposal would raise the bar at which combined heat and power criteria apply from 20MW to 75MW. This would omit the vast majority of currently operating plants from efficiency obligations.

Parr said the role of genuinely sustainable bioenergy should probably be limited to organic wood waste. This has traditionally been seen as ripe for carbon neutral energy transformation as it would otherwise decompose, releasing its carbon dioxide within a few years.

But even this assumption is wildly optimistic, according to a study published in Environmental Research Letters today, which provides a new model for calculating the net emissions impact of burning wood pellets made only from residues, and not whole trees.

CHN is one of the world’s most trusted independent sources of climate politics news. Sign up for our newsletter.

Because burned pellets emit carbon at a faster speed than decomposing forest material, the paper finds that burning them creates more net emissions – when measured against their “alternative fate” as decomposing twigs and branches.

Mary Booth, the report’s author and director of the Partnership for Policy Integrity, a campaign group opposed to biomass, told CHN that counting biomass smokestack emissions – which tend to be greater than coal per megawatt-hour – was a more representative way of tallying net emissions than current assumptions of carbon neutrality.

“Scenarios that hold down greenhouse gas emissions to avoiding dangerous temperature rise require CO2 emissions to peak in the next ten to twenty years,” she said. “However, this analysis shows that wood-burning power plants burning green chips and wood pellets will inject a lot of extra CO2 into the atmosphere just in [that] period when it is most urgent to reduce emissions.”

The paper finds that cumulative net emissions from residue pellet-burning will also increase over a 40–50 year period, though less steeply.

Wood burning power plants account for the majority of Europe’s renewable energy production and are as eligible for renewable energy subsidies as wind or solar power. Drax, formerly the UK’s largest coal plant, has been converted to burn wood pellets.

The pellets they burn are often made from felled whole trees, but the paper finds that even when “true” wood wastes are assumed, up to 95% of the cumulative pollution represents a net addition to the atmosphere over decades.

“Drax and other power plants burning wood pellets emit as much or more CO2 per megawatt-hour as when they burn coal, but they get to avoid carbon trading fees for biomass emissions,” Booth said.

A Drax spokesperson said: “The science is not in doubt, where biomass is sourced sustainably using low grade material it delivers significant carbon savings through reduced use of fossil fuels and it helps improve the health and growth of forests, meaning they can absorb more carbon. Drax’s biomass units deliver carbon savings of more than 80% compared to when they used coal – this is independently audited.”

A separate study released by the International Renewable Energy Association and European Commission on Monday found that the EU could cost-effectively double its deployment of biomass by 2030.

“However, its share in the total consumption of renewables would decline from 67% in 2010 to 55% in 2030 as the growing contribution of other renewables outpaces bioenergy,” the report said.