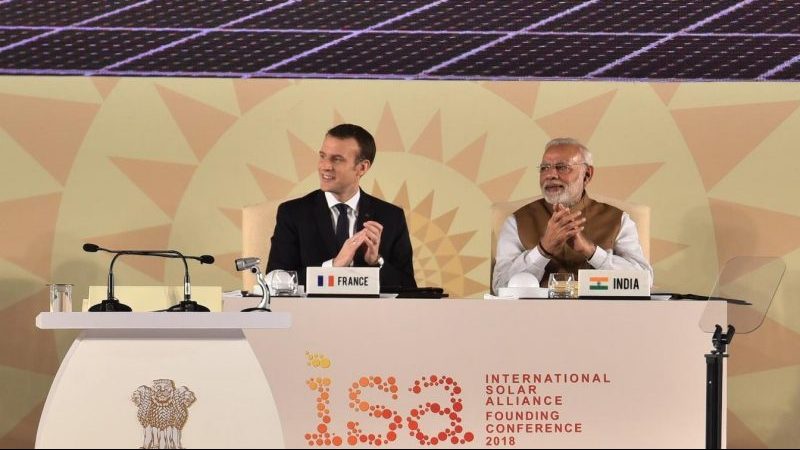 Emerging economies will get the assistance in the form of loans and donations, over and above the 300 million euros ($369m) France had already committed in 2015, AFP reported.

Speaking at the founding conference of the International Solar Alliance in New Delhi, Macron took an indirect jibe at the United States for leaving the United Nations climate change deal.

“Our solar mamas did not wait for us,” he said, referring to a group of women solar engineers. “They started to act and deliver complete results. They did not wait and stop because some countries just decided to leave the floor and leave the Paris agreement.”

US President Donald Trump had in 2017 decided that his country was withdrawing from the Paris climate agreement, signed by 195 countries in December 2015.

India and France are co-hosting the first International Solar Alliance summit in New Delhi. Heads of state of 23 nations were present at the event.

The International Solar Alliance is a treaty based inter-governmental alliance of 121 sunshine-rich countries that lie fully or partially between the Tropics of Cancer and Capricorn. Their adoption of solar energy is expected to help reduce the use of fossil fuels and combat climate change. Sixty countries have signed the agreement to join the alliance. Macron said member countries made up three-fourths of the world population, PTI reported.

At the event, Prime Minister Narendra Modi suggested reading the Vedas to find ways to control climate change. “The Vedas consider the sun as the soul of the world, it has been considered as a life nurturer,” he said. “Today, for combating climate change, we need to look at this ancient idea to find a way.”

This article was produced by Scroll.in