When will the world’s polluters start paying for the mess they made?

At UN climate talks in Bonn, governments must find sources of finance to support the victims of climate disaster, write officials from four vulnerable countries 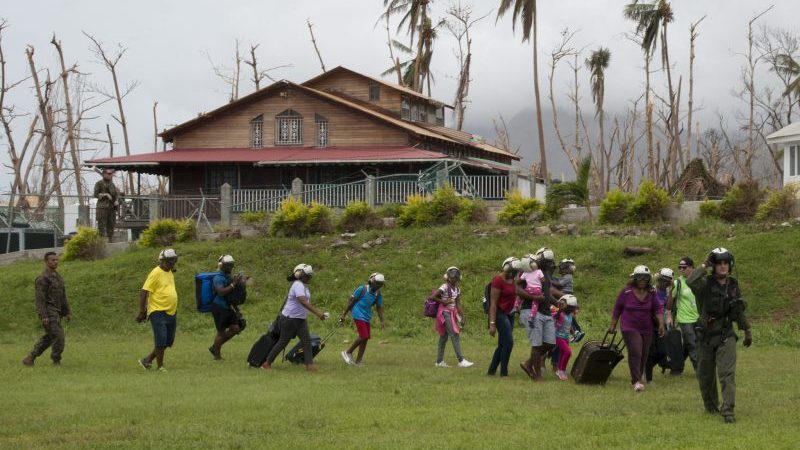 The climate wars have begun and we call to you from its front line. Climate change is not a concept or a future risk, it is our reality.

A few months ago, Hurricane Maria caused economic losses and damages of 226% of Dominica’s GDP. Only two years before, Tropical storm Erika cost Dominica 90% of GDP, and Tropical Cyclone Pam battered Vanuatu, costing 64% of Vanuatu’s GDP.  Last year Bangladesh suffered the worst flooding in a century covering one third of the country and affecting 11 million people, and in 2007 and 2009 Tropical Cyclones Sidr and Aila devastated Bangladesh. High coastal tides have reached deep inland in the Seychelles, threatening its economic livelihood.

Warmer seas have made tropical storms and coastal flooding more destructive than before, and that is before we consider the human costs of lost lives, homes, roofs, jobs and livelihoods. The trauma of monumental disasters cost lives long after the disaster passes.

We choose to be captains of our fate. We are endeavouring to waterproof our livelihoods and societies. But to do so will cost more than 100% of our GDP. We cannot do so overnight and yet each day takes us closer to the next hurricane, cyclone or monsoon. Climate change is relentless for us.

It is not only unjust that we should pay the costs of loss and damage from a climate change we did not cause, this very iniquity is a force behind climate change. As long as those who profit from the production of greenhouse gases are not those who suffer its most extreme consequences, climate change will accelerate. Soon the whole world will be affected, but soon it will be too late.

The effective solution lies in the polluter pays principle and international solidarity envisaged by the 2013 Warsaw International Mechanism for Loss and Damage, later enshrined in the 2015 Paris Climate Agreement.

There was much self-congratulation at Paris. But five years on from Warsaw and two and a half years on from Paris, nothing has been done internationally to implement mechanisms to raise the amount of finance needed to offset the losses and damage of climate change for the most vulnerable. The resources currently available are no match for the costs. To ration them these resources are made difficult, costly and slow to access. Monumental disasters require immediate responses, not pledges that take years to deliver.

Resources to offset climate-related losses and damages need to be scaled up and the perpetrators, not the victims, must pay. Serious consideration must be given to solutions like a climate damages tax on fossil fuel extraction or consumption, a climate levy on those sectors that contribute the most to climate change and more impactful carbon pricing schemes. These mechanisms could raise the hundreds of billions of dollars a year that are necessary, could help to reduce the production of greenhouse gases and could be designed to respond faster to immediate or slowly unfurling climate disasters.

The Suva Expert Dialogue today and tomorrow at UN climate change talks in Bonn should start the task of laying out a roadmap towards mobilising additional finance for loss and damage at the appropriate scale. The UN must convene a task force to explore new mechanisms for mobilizing the resources required, targeting the most vulnerable and disbursing funds when they are needed, not years later. This task force should be mandated to propose new finance mechanisms by 2019 when the Warsaw International Mechanism for Loss and Damage is to be reviewed.

The Paris Agreement enshrines the principal of climate justice, but a grave injustice grows by the hour. Without a financing mechanism that is of the right scale, enables speedy disbursement and by making polluters pay reduces the production of greenhouse gases, the Paris and Warsaw agreements will end up being empty vessels. This is our generation’s Bretton Woods moment. The solutions exist. The time for talk is over. The time for action is now.

Ronny Jumeau is ambassador to the United Nations and United States, Seychelles

Anisul Islam Mahmud is minister of environment and forest, Bangladesh