In a year when we learned some hard truths about climate change, CHN brought you scoops and investigations from around the world 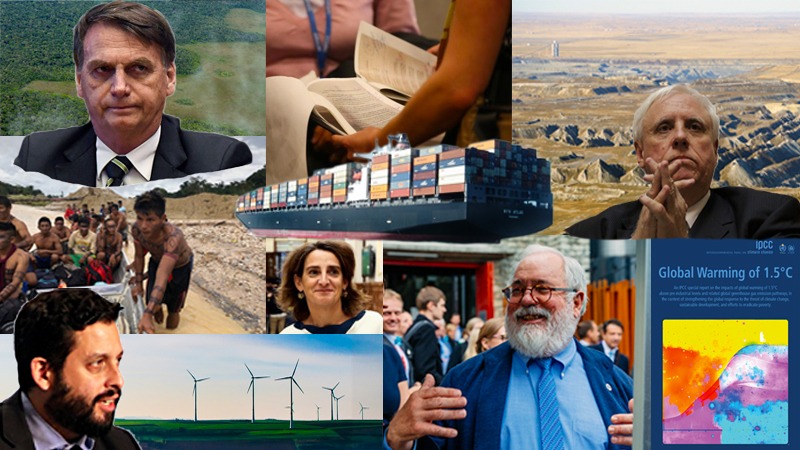 In 2018, Climate Home News reported alarming developments from Brazil, the US, science and within the climate community itself.

Amid the continued rise of nationalist populism and stark warming warnings, though, there were glimmers of hope: a breakthrough climate deal for shipping and rules to swing the Paris Agreement into action.

We grew in readership and reputation, winning a UK online media award for best specialist/local news site. Let me walk you through our biggest scoops, features and investigations.

The impact of a special report on the science of 1.5C warming from the Intergovernmental Panel on Climate Change took even its authors by surprise.

Beforehand, some experts were sceptical of the value of focusing scientists’ energies on a target that, at this point, is barely feasible. But the report brought home more clearly than ever the cost of inaction and the scale of transformation needed to avert disaster. It seized people’s attention.

CHN tracked the report through leaked drafts in February and June, to the final version landing with a thud in October. Our 37 takeaways were republished in Polish.

We were also there when an alliance of oil-producing countries – US, Russia, Saudi Arabia and Kuwait – refused to “welcome” the report into UN negotiations.

It was a footnote in early newswire reports on Jair Bolsonaro’s presidential campaign: he wanted to take Brazil out of the Paris Agreement.

CHN was the first international news site to delve deeper, examining his dynasty of denial and – from our Manaus correspondent – the grim threats Bolsonaro made to the Amazon and its people.

Deforestation jumped almost 50% during the electoral season, in anticipation of weaker environmental protections. Bolsonaro’s picks for foreign and environment minister do little to reassure. He hasn’t even taken office yet, but his administration has backed out of running next year’s UN climate summit.

There is no specified penalty in the Paris Agreement for backsliders, but trade is one potential arena for defenders of the deal to show their displeasure.

France and then the EU talked tough on this, warning Donald Trump the US could not expect more favourable terms if it refused to honour Paris. When it came to the crunch, though, European Commission president Jean-Claude Juncker took a more pragmatic line.

Canada has been similarly split, adding climate language into its pact with the EU but omitting it from a new deal with the US and Mexico.

Campaigners have suggested the EU could use its buying power to save the Amazon rainforest from Bolsonaro. It’s a smart idea in principle, but will take more than bluster to make it happen.

We reported on the tragic suicide of Holly Borday, a former employee of Climate Action Network International (Can-I). In an emotional open letter to the climate movement, her father Robert said “cruelty at work… broke her spirit”.

Another ex-staffer directed bullying allegations at Wael Hmaidan, executive director of the influential campaign group; 15 people in the movement accused Can-I of failing in its duty of care. Hmaidan has been put on leave pending an independent investigation.

File this one under: if CHN didn’t cover it, nobody would. As journal of record for the international climate community, part of our role is holding key players within the movement to account. Nobody working in the climate space should face abuse or harassment and we will be following the outcome closely.

Our most ambitious project this year was Mark Olalde’s deep dive into the endgame for US coal mining. After months of data-crunching, he found there was not enough money set aside to clean up mines as they close.

Olalde also exposed how the inaptly named Jim Justice, coal tycoon and West Virginia governor, is using a loophole to leave mines in limbo. That means laying off miners, while deferring the hard work of restoring the scarred landscape.

The “just transition” to a low carbon economy was a key theme for Poland as host of this year’s UN climate summit, held in the heart of coal country. Even under a pro-coal government, miners there are terrified of climate laws and losing their communal traditions.

We need your help

During the year, CHN launched our patrons programme. This allowed readers to support our work through regular donations. We are nearly at 100 patrons. If we reach 500 in the next year, it will make a huge difference to our capacity. Please consider helping us bring you more stories in 2019, with a monthly payment at whatever level you choose.

Patience is a virtue

Karl Mathiesen filed a freedom of information request in 2016 that was eventually honoured this year, after a lengthy appeals process.

It shed light on BP’s failures in the Great Australian Bight. Letters showed the oil major’s staggering lack of regard for the environmental risks of drilling, including its assertion cleaning up a potential spill would offer a “welcome boost” to the local economy.

BP abandoned its plans, but Norway’s Equinor (the oil major formerly known as Statoil) is still actively pursuing a controversial project in the region.

Shipping is set to halve its carbon footprint by 2050, under a deal struck at the International Maritime Organization (IMO) in London.

It was a leap for the sector, but only does about half what climate advocates say is needed. In follow-up talks, some countries were in no hurry to get started, seeking to defer concrete measures to meet the target until 2023.

Last but not least…

More than 24 hours into overtime, negotiators in Katowice, Poland, agreed the rules to put the Paris Agreement into action. CHN was there for the whole two weeks of talks, right down to the final liveblog. Catch up on our full Cop24 coverage here.

If you prefer an audio digest of the Cop24 vibe, listen back to our daily podcast, on everything from France’s yellow vest movement to Pacific storytelling traditions.

That is all from CHN for this year, as we take a festive break. See you in 2019!