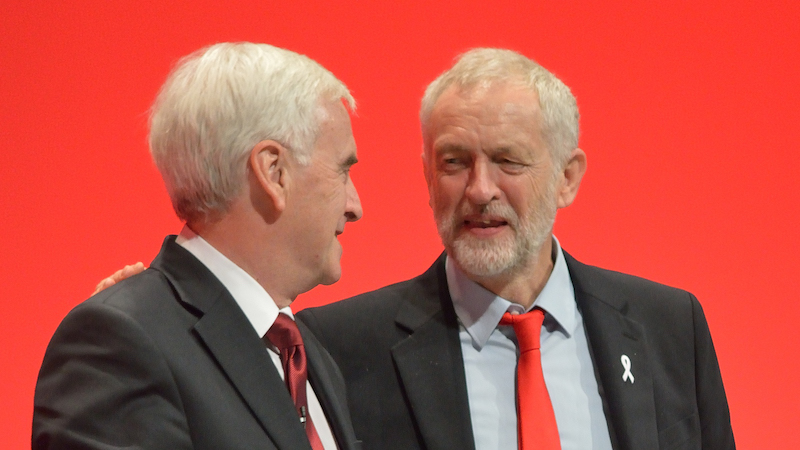 UK opposition leader Jeremy Corbyn met with one of the architects of the US Green New Deal this week, while inside his Labour party two camps began forming competing visions for a UK version.

The meeting between Corbyn and Zack Exley – who helped US congresswoman Alexandria Ocasio-Cortez draft a resolution for a massive green economic stimulus – was also attended by shadow chancellor John McDonnell and shadow treasury minister for sustainable economics Clive Lewis.

Exley’s UK visit comes the week after Ocasio-Cortez proposed a Green New Deal resolution to Congress. Her plan aims to virtually eliminate US greenhouse gas pollution inside ten years. The deal was backed by most Democratic presidential candidates and sparked calls within UK Labour for the party to develop a similarly ambitious project.

Norwich MP Lewis, who has been charged by McDonnell with developing Labour’s green financial strategy, hosted an invite-only meeting on Monday with Exley, environmental and Labour activists at which broad principles for a British Green New Deal were drawn up. That event was also attended by Green MP Caroline Lucas and economist Ann Pettifor, who were part of a UK group that proposed a Green New Deal in 2008.

Neal Lawson, chair of the pressure group Compass, was also at the meeting.

“There are two emerging ways of addressing the climate change issue in Labour,” he said. “One is the policy agenda being thrashed out between the shadow cabinet and the trade unions and the other is a fledgling, grass roots campaign to create a USA-style Green New Deal. The question is how do the two work together?”

Long-Bailey told Climate Home News that meant hosting roundtable events up and down the country, with unions, industry and community groups. She floated the initiative on Twitter alongside a Green New Deal hashtag.

Long-Bailey said the green transformation had “to be done in partnership with the unions… Because the unions are the Labour party anyway, our job is… to provide a just transition to those industries that might be negatively affected”.

Some Labour insiders believe a radical proposal, in line with the US Democrats, is likely to face resistance from the unions that heavily influence Labour policy. They point to last year’s vote on the expansion of Heathrow Airport as an example of how the union was able to overrule the party’s climate concerns in favour of job creation. Despite its opposition to the expansion plan, the leadership decided not to whip votes, and saw 119 of its MPs (Long-Bailey abstained) back the government plan for a third runway. “That was frustrating,” said a Labour advisor.

Asked whether Unite would support a broad economic transformation in the UK, similar to that being promoted in the US, energy officer Peter McIntosh said the union supported a transition away from coal power, but that communities and workers must be supported because “the last thing we want in the coal-fired stations is what happened in the coal mining industry”.

“For us to achieve what we need to achieve,” McIntosh said, “nuclear has to be a component… Wind and solar will not provide the energy we need.” He said he did not know when gas, which supplies around 40% of UK power, could be phased out.

Last week, Long-Bailey publicly supported Ocasio-Cortez’ launch of her Green New Deal resolution. On Twitter, she lauded the project for its recognition that “climate politics is class politics, race politics, gender politics” and its commitment to transforming “communities held back for decades”.

But Long-Bailey’s own industrial strategy for Britain’s struggling regions, published last month, only mentions climate policy as part of a plan to extend industry exemptions from the UK’s carbon tax.

“What this isn’t is any sort of Green New Deal,” said one Labour advisor. “One’s just a fucking tweet and one’s a 68-page policy document.”

Clare Hymer, from the newly-formed Labour for a Green New Deal group, said their strategy would not be lobbying union leaders, rather she said, “we’ll be organising with union members around the country”.

On Tuesday in the US, unions raised concerns over the Green New Deal proposal and its potential to impact their members’ jobs.

“I wish that in America we had a progressive labour movement, like you do in Britain, because we don’t,” Exley said.

The political consultant implored Labour and the unions to back a Green New Deal, adding that it would help the US movement for the concept to have international buy-in.

It was going to take a while for the consequences of the package to “sink in”, he said.

“The way we’ve put this idea together over there is that after this ten year sweeping mobilisation, every union will have more members, and their wages will be higher… Our various interest groups in America, they’ve been fighting for the same crumb for so long. What the Green New Deal is, it’s like a loaf of bread for each one, but they are like: but where’s my crumb?”