Comment: Widely dismissed as a symbolic victory in 2015, the blocking of a major pipeline project has forced Canada’s oil patch to limit its output, vindicating activists 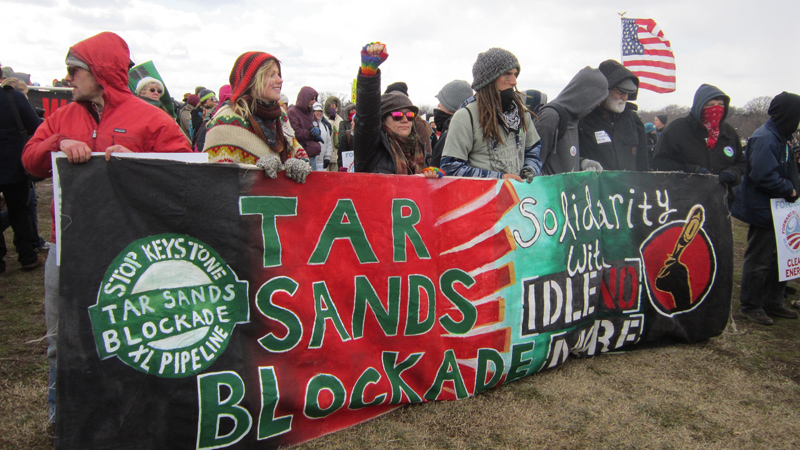 Even among those sympathetic to it, the climate movement’s success in persuading President Barack Obama to reject the Keystone XL pipeline in 2015 was widely regarded as a symbolic victory.

Stopping one pipeline was hardly going to stop climate change, after all. And even the more limited goal that activists had set – stopping the exploitation of Alberta’s highly polluting tar sands – was dismissed as unrealistic. The oil would simply find another way to the market, the argument went, leading New York Magazine’s Jonathan Chait, for example, to declare “The Keystone Fight is a Huge Environmentalist Mistake”. Well, perhaps not.

“Historic Price Crash Plunges Canadian Oil Patch into Crisis,” Bloomberg reported in November 2018: “Heavy Canadian crude has been on a downward spiral since mid-May, with prices plummeting by more than 60 percent as an onslaught of new production from the oil-sands overwhelms the nation’s pipelines.”

The inability of Alberta producers to efficiently transport their oil to refiners, Bloomberg noted, had led to a substantial build-up of inventory in the region, and a correspondingly sharp discount on West Canada Select crude compared to the benchmark US oil price. In some instances, Albertan tar sands oil sold for more than $50 less than the typical US barrel, with prices sometimes dipping under $20. The financial consequences for the companies concerned were so significant, they precipitated that most ironic of oil industry behaviors: private producers calling for government-imposed supply cuts.

There is a direct line, therefore, between the Keep It In the Ground campaign and Alberta Premier Rachel Notley’s decision in December to do just that: mandate a reduction of 325,000 barrels a day of Albertan oil production, a reduction that began on 1 January this year.

“Every Albertan owns the oil in the ground,” the Alberta government website explaining the action states. “We have a responsibility to get our product to market for a fair price.” Elsewhere it notes: “It’s crucial that we match our production levels to what we can export”. Pipelines, it turns out, have more than symbolic significance.

By putting their bodies on the line to stop Keystone XL from being constructed, protesters have effectively forced the Alberta government to impose a hard ceiling on the province’s oil production, with reductions to remain in effect throughout 2019. The plan worked.

Premier Notley’s actions are far from unprecedented. In August 1931, faced with a flooded market and an oil price that had collapsed from a dollar to 15 cents, the Governor of Texas declared martial law and used the National Guard to close wells across Texas.

Thereafter followed no less than four decades of government-imposed oil production quotas, not only in Texas but in other major oil producing states like Oklahoma, Louisiana, and New Mexico. These quotas shut in production capacity that, at its peak, kept the US producing over 4 million barrels a day less than it otherwise would have (an amount close to Canada’s entire production today).

Former George W Bush White House energy advisor Bob McNally has enthusiastically described the US state rationing system as “the most communistic, centrally planned, interventionist, heavy-handed government control of a commodity ever seen in human history”. Using government authority to keep oil in the ground, in other words, is as American as apple pie. There has never been a more urgent need to revive it.

In her video address explaining the cuts, Premier Notley states: “Our energy resources… are our natural inheritance – defended by those who came before and handed down to us in trust. We have a duty to defend these resources, protecting them for our children and our children’s children. So let me tell you how we are doing that. First, we are not letting up on our fight to build new pipelines.”

The non sequitur is really something. Alberta undoubtedly has a duty to preserve the oil in its tar sands for future generations. That duty, however, is advanced not by building more pipelines, but by capping Alberta’s oil production – permanently.

Not only are steadily increasing emissions from upstream oil and gas production a large reason for Canada’s dubious progress towards achieving its Paris Agreement target, but the pipelines necessary to further expand production create considerable environmental risks, to say nothing of their impact on indigenous sovereignty.

Lest we forget, the best-case scenario for these investments is that they become economically damaging stranded assets: bad bets on continued fossil fuel dependence at a time when the world is shifting to clean energy. The alternative – their full utilization – entails climate disaster.

What began as an emergency measure in Texas in 1931 quickly evolved, with the passage of the Texas Market Demand Act of 1932, into a system of rational government control and conservation of oil in the United States. In a sane world, events would follow the same path in Alberta this year.

In the meantime, those who truly have the interests of our children’s children at heart are gearing up to stop the Enbridge Line 3 pipeline: the next fight in the campaign to secure by direct action what should have already been done by government regulation.

Let no one say it isn’t worth it.