Czech Republic, Estonia, Hungary and Poland blocked an agreement on a net zero carbon target for 2050 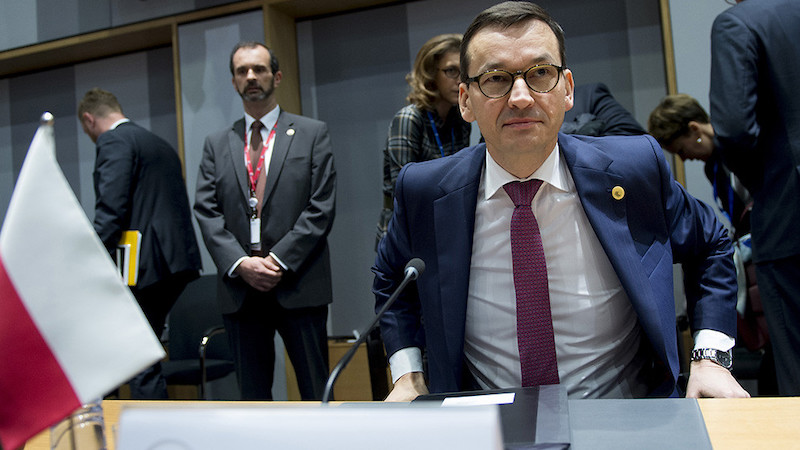 The European Council failed to agree on Thursday on a landmark climate strategy for 2050 as the Czech Republic, Estonia, Hungary and Poland baulked at the mention of a specific date, despite the efforts of France and Germany to convince them.

Leaders of the EU-28 did not manage to broker an agreement that would have seen member states slash greenhouse gas emissions significantly by 2050, after Estonia and three of the Visegrad Four protested at the inclusion of an explicit date.

The next opportunity to return to the issue will be October, at an end-of-month summit due to be Jean-Claude Juncker’s last as Commission president. The summit is likely to be dominated by Brexit though as the UK is due to leave the bloc at midnight on 31 October.

A final version of Thursday’s conclusions says the EU will “ensure a transition to a climate neutral EU ‘in line with the Paris Agreement’”, replacing the 2050 date that appeared in the latest draft this morning.

It means that the EU will go to a crucial UN summit in September, as well as next week’s G20, without the sought-after deadline, although conclusions for this summit make it clear in footnotes that all but four of the member states agree on the target.

“For a large majority of member states, climate neutrality must be achieved by 2050,” it reads.

Poland's PM seems pretty chuffed to have blocked reference to an EU-wide 2050 net zero target. A tweet, perhaps, that will ensure 2018 was the last UN climate summit in Poland for a while? My lungs certainly hope so. https://t.co/kNyyGMD7fG

The meeting results say that the Council still intends to wrap up talks by the end of the year and that there will be a final deal “in early 2020”. The European Commission and national delegates are urged to look more closely into the financial impact of the strategy.

Green MEP Ska Keller said the result was a shame and that “protecting business interests and power still seems to be more important”. Environmental group WWF Europe said that it “makes a mockery of the Paris Agreement”.

Extra details on funding and the societal element of greening the economy were included in the latest draft conclusions specifically to placate the fears of countries like the Czech Republic and Poland, as both rely heavily on fossil fuels. But it was to no avail.

Polish prime minister Mateusz Morawiecki, who celebrated his birthday on summit day, told reporters that he could not support the 2050 inclusion due to lack of a “thorough analysis” of the costs. He added that now there was time to “work out a just compromise”.

A diplomatic source told Euractiv that chancellor Angela Merkel ultimately came round to the Visegrad’s way of thinking, although she reportedly made the case for 2050 for much of the behind-closed-doors talks.

But the chancellor was also accused of “talking the talk” outside the meeting room but not committing fully to the cause when it really mattered.

“I do think that despite all differences, the EU will be in an excellent position in New York to be a leader in international climate protection,” Angela Merkel said during her post-summit remarks.

Czech prime minister Andrej Babis, who is currently embroiled in an alleged misuse of EU funds case, made the point that the EU should not make such radical changes when countries like China have no intention to follow suit, according to another source.

France also reportedly “pushed too hard” for the Visegrad countries’ liking, which was labelled as unhelpful by other diplomats.

A source confirmed that the Visegrad Three were the “ringleaders” and that Estonia also held back when it became clear that there would be strength in numbers.

The chances of finalising the strategy at this summit were always slim, only eight countries backed the idea at the last meeting in March, but expectations built that the council would at least agree to set the 2050 date in stone.

Hungary’s carbon-neutral announcement earlier this week and subsequent insistence that it had a common position with its Visegrad counterparts also pointed in the direction of an ‘agreement-to-agree’.

But a high-ranking council source told Euractiv that commitment to carbon or climate neutrality by 2050 in principle is not the same as committing to sign up to the strategy here and now. “We ran out of time and maybe asked too much.”

The delay until the end of the year or early 2020 means that final talks on an agreement will coincide with the EU’s ongoing long-term budget negotiations.

Council sources told Euractiv that the outcome of the multiannual financial framework (MFF) talks will be crucial to the climate plan’s chances, as the likes of Poland seek assurances on the economic impact of adopting the plan.

Proposals on the MFF table include ringfencing a quarter of the trillion-euro-strong budget for climate mainstreaming, spending more on clean tech development and setting up a fund dedicated to helping mostly Central and Eastern European countries.

Sources close to European Council president Donald Tusk suggested that the result is not a bad one for the Polish leader, as he is not keen to see a climate agreement under his watch. His reported interest in returning to national politics would likely suffer due to the sensitive nature of climate policy in Poland.

Greenpeace EU said “our governments had a chance to lead from the front […] They blew it.” The green pressure group, as well as Climate Action Network Europe, also called on EU leaders to call an emergency summit before the UN meeting in September.

Tusk is facing similar calls from member states desperate to see more progress in the MFF talks and Jean-Claude Juncker is a notes advocate of the idea.

Organising summits is purely the prerogative of Tusk but sources confirmed that if enough countries asked for another meeting, he would be hard-pressed to say no.