After an April protest brought London to a standstill, a global rebellion launched on Monday and was met by a strong police response with hundreds arrested 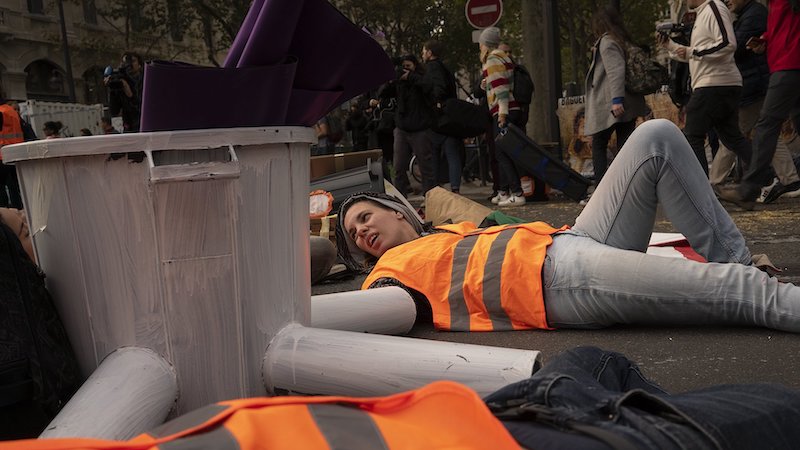 Hundreds were arrested on the first day of a two week rebellion by climate activists in cities across the world.

Groups in Germany, France, Hungary, Australia, New Zealand, Austria, the Netherlands and Spain attempted to build barricades or block traffic by sitting on the road.

In London, UK, Extinction Rebellion closed off sections of the city centre as the group targeted the government’s failure to sufficiently address the threat of climate change. The Metropolitan Police said 135 arrests had been made by early afternoon.

The UK group has faced more active policing than during actions in April, with protestors today cleared from Lambeth Bridge hours after the protestors occupied the space — a marked change in approach to the spring action in which campaigners were allowed to occupy sites across central London for almost two weeks.

The police also used stop-and-search powers on members of the group and conducted a pre-emptive raid on a warehouse storing equipment over the weekend.

Ruth Ben-Tovim, an Extinction Rebellion spokesperson from Totnes who was on Lambeth Bridge this morning, told DeSmog: “Some people were trying to get through the cordon, so the police were pushing firmly back from that, and groups of officers did sweeps of arrests. But it was all very peaceful and non-violent this morning.”

Protestors have reportedly been instructed to refuse bail when arrested in the hope that police holding cells will become full, restricting capacity for further arrests.

Deputy Assistant Commissioner Laurence Taylor told radio station LBC on Monday: “We’re absolutely not saying you can’t protest, but what we are saying is that protest has to be lawful.”

He said blocking highways was unlawful and the police intended to deal with such action “robustly”.

A number of sites were occupied this morning, including Westminster Bridge, Trafalgar Square and Whitehall. Protestors set up temporary structures and staged sit-ins to secure the roads.

On Trafalgar Square roundabout, two activists locked themselves to a funeral hearse, blocking traffic, where they were joined by several hundred other campaigners.

In St James’s Park, another group of protestors highlighted the implications of climate change on existing global inequalities, and set up a temporary camp.

Sophie Cowen, a spokesperson for Extinction Rebellion, said they were there to demand government departments explain their response to the climate crisis.

“The government did not act on Parliament’s declaration of a climate and environmental emergency. We’re asking government departments to tell us what their plans are. So far we haven’t seen any action.”

“This is not just a problem for the UK, this is directly affecting communities in the global south, and we need to recognise the responsibility we have as the birthplace of the industrial revolution.”

Responding to criticism of the disruption the protests will cause, she said: “We really apologise to Londoners for the disruption but this is two weeks, compared with the risk of mass starvation and the end of society as we know it.”

The group plans to target government departments on Tuesday and London’s financial district next week.

In Berlin, Extinction Rebellion blocked a main traffic junction near the government district and set up a protest camp in front of the seat of the German parliament in order to “bring attention to the threat of the collapsing climate and destruction of ecosystems”.

Another blockade at Potsdamer Platz, another central intersection, started at about 12pm. The movement had announced two weeks of protests with plans to occupy main roads and “paralyse” the German capital and other major cities around the world, starting on 7 October.

#ExtinctionRebellion in Berlin. Climate activists from @XRBerlin have blocked roads around the Siegessäule. (Photos: @grit_hofmann) pic.twitter.com/ugk0o0juLD

“It appears that demonstrations won’t make politicians listen to the science so we are going one step further and saying, we want to peacefully commit civil acts of disobedience, block roads, and finally put pressure on the political decision-makers,” climate activist Timm von Schmude told Clean Energy Wire at the Großer Stern traffic intersection, which he and other protesters had occupied since the early morning. Extinction Rebellion estimated there to be around 600 people on the streets where protests had so far been peaceful.

Extinction Rebellion demands that the German government “tell the truth” about “the ecological crisis” and declare a climate emergency. It also calls on the government to “act now” to reach net-zero greenhouse gas emissions by 2025 and set up a “Citizens’ Assembly” of randomly selected people supported by experts to make binding climate action decisions, alluding to the Irish citizens’ assembly as a role model.

Germany’s official target so far has been to reduce emissions by 80-95% by 2050. The government is currently in the process of passing a climate protection law and a climate package, which many activists say is not ambitious enough.

Berlin’s senator of the interior Andreas Geisel said the blockades would be observed and allowed to continue “for a while” as they could be regarded as spontaneous demonstrations, permissible under the right to demonstrate, wrote Der Tagesspiegel. If violence was used or critical infrastructure such as the airport became affected, the police would have to intervene, he said.

Head of the federal chancellery Helge Braun, from Merkel’s CDU, criticised the blockades: “We all share the concern about climate protection and the climate targets, but if you announce dangerous interventions in traffic and things like that – that’s of course not okay.”

Thirty protesters were arrested in Sydney for obstructing traffic, the Guardian reported.