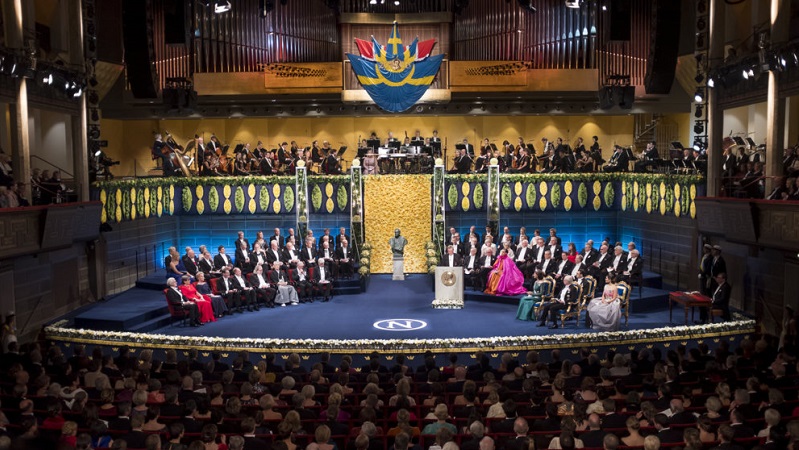 Does promoting “fraternity between nations” encompass acting to safeguard their shared future?

That question was at the heart of a debate raging around the Nobel peace prize committee as they made their selection for this year’s honour.

The prize went to Ethiopian prime minster Abiy Ahmed for his work to end the long-running conflict with neighbouring Eritrea.

Also in the running was Greta Thunberg, who has singlehandedly sparked a global movement for climate action.

Alister Doyle reports from the ceremony in Oslo that Thunberg’s candidacy has reprised a long-running debate in Norway over how the five-member committee, drawn from all sides of Norwegian politics, should interpret Alfred Nobel’s will and whether environmental work is eligible for the peace prize.

German trains get a boost

In a first in Europe, ratings agency S&P Global have responded to a government climate law by boosting the national rail provider. The law will levy road and air transport, while cutting VAT on train trips. That was enough, said S&P, for them to raise their credit score from AA- to AA.

Brazil has dug its heels on negotiations setting-out the rules for a new global market mechanism for carbon offsets.

At a preparatory meeting for this year’s UN climate talks, Brazil opposed rules to avoid double counting and the use of old credits, which analysts warn could undermine the Paris Agreement. Both India and China also want to use old credits in the new market.

The contentious discussions will carry on in Chile later this year, but the prospect of a resolution isn’t in sight.

Around the world, Extinction Rebellion protesters have been on the streets for five days, demanding governments take serious climate action.

Beating the rain, XR rebels and supporters continue to occupy roads, bridges and squares in London, Paris and Berlin with crowds expected to swell over the weekend. The Met Police in London said it made 1,112 arrests in London alone as of Friday 8am.

Disruption tactics have also gone up a gear. Paralympics medalist James Brown, who is vision impaired, grounded a British Airways flight from London’s City airport to Amsterdam after climbing on the roof of the plane.

In Strasbourg, Frans Timmermans, who is set to run the EU Commission’s climate policy, told lawmakers he would be “extremely surprised” if the new commission doesn’t support increasing the block’s 2030 target to cut emissions by “at least 55%” from 1990s levels.

Despite Brussels’ support for a hiked target, political will among member states is still lagging. Last week, environment ministers fell short of agreeing an outright increase of the EU’s 2030 climate target next year but there was consensus for an “update”.

From the Russian taiga

Russia’s boreal forest is the largest forested region in the world. And like the Amazon, it is threatened by wildfires and illegal logging – largely driven in the Siberian case by China’s timber demand. But one woman is on a mission to expose the loggers and protect the forest.

Natalie Sauer has made the journey to the taiga for this special report.

And in Climate Conversations