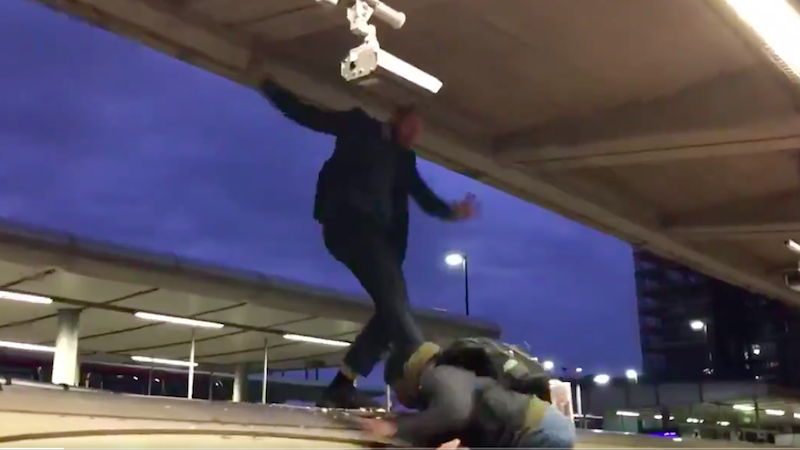 An Extinction Rebellion protester kicks out at a commuter who then dragged him from the top of a train he was trying to disrupt (Screenshot: Mahatir Pasha/Twitter)

The twin fronts of Extinction Rebellion and the school strikes movement are making inroads. Politicians all over are responding to the pressure.

The more militant XR should be flying high as they start to wrap up their two week ‘Autumn Uprising’. After more than 1,700 arrests, it has forced the police to overplay their hand, to the extent that they outlawed the group from all of London.

That decision, which did nothing to deter a group whose primary tactic is to provoke the police into arrests, is now the subject of a High Court hearing next week. A legal expert told Natalie Sauer the ban was “excessive and disproportionate” and probably in breach of the European Convention.

Meanwhile, media analysis commissioned by CHN found that more than 20,000 articles have been written about Extinction Rebellion in October. That compares with 5,889 during the group’s last big protest in April. The estimated number of people reached has been three times larger.

But instead, in its UK heartland, XR faces a crossroads after an ill-conceived attempt to stop the London Underground during peak hour led to two protesters, one of whom broke the group’s non-violent mantra by kicking out defensively, being hauled from the trains by angry commuters.

Shocking moment angry commuters drag two #ExtinctionRebellion protestors off the top of a train in Canning Town and attack them. pic.twitter.com/EZAMa9tT2t

But the broader public won’t care about such distinctions. Nor, perhaps, will they distinguish between XR and the school strikes or broader climate movement.

Even XR, with its revolutionary creed, has skin in public opinion. It is trying to convince elected MPs to sign up to a bill that satisfies its manifesto to cut emissions to zero in five years. Its third demand, creating a citizens’ climate assembly, shows it remains deeply aligned to democratic power.

It can’t win if the defining image of two weeks of enormous human effort, bravery, crowdfunded cash and camaraderie will be Extinction Rebellion, embodied by two blokes on top of a train, setting itself against the rest of the public, just trying to get to work.

Monday’s election in Canada will be defined by the climate debate. Chloé Farand breaks down why, who and what the parties are saying on the environment.

A progressive candidate for mayor storms over the top of the ruling party in the capital’s election, much to the chagrin of the autocratic national leader. Nope, not Turkey: Budapest, where Gergely Karácsony’s green opposition beat out the Victor Orbán-backed incumbent Istvan Tarlos.

In Ecuador, a masterclass in how not to reduce subsidies for fossil fuels from the centre right government (under pressure from the IMF) has led to the worst civil disorder in a decade, seven deaths and a shamefaced backdown for the president.