How three islands have inspired the Maldives to fight water shortages

Sponsored content: A focus on improving, redesigning and engaging with water management programmes is a model for small nation climate adaptation 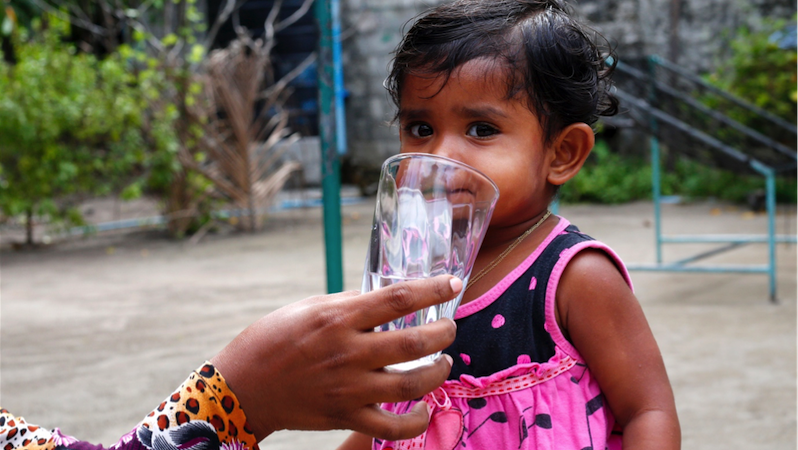 A three-way integrated system was crucial in a project’s approach to lessen the threat of water shortages. (Photo: Ashwa Faheem)

By Zak Derler and Adaptation Fund

Three islands in the Maldives, which faced water starvation, now serve as a model for securing supply across the archipelago.

The Maldives, which consists of 26 atolls southwest of Sri Lanka, is the lowest country in the world and its 1192 islands are composed mainly of coral reefs and sand bars. This combination makes for an abnormally shallow aquifer and therefore groundwater and freshwater are extremely scarce.

The situation in the region is only being exacerbated by increasingly variable and unpredictable rainfall and sea level rise, which has intensified the urgency of ongoing action on climate adaptation.

An integrated water resources management programme (IWRM), originally established by the Adaptation Fund, was piloted on the islands of Mahibadhoo, Ihavandhoo and Gadhdhoo. They were selected because they represented different geographical locations across the archipelago and shared a flat topography, sitting between 0 to 0.5 metres above sea level.

Working alongside the UN Development Programme (UNDP) and the Ministry of Environment and Energy in the Maldives, the Adaptation Fund provided $8.9 million for the project.

The plan was to invest in a mix of physical systems and facilities to target primary water scarcity issues on the islands, and then to address the educational and engagement opportunities for water users to contribute and evaluate their options with their suppliers. There were three primary methods pursued – the harvesting of rainwater, the implantation of water recharge systems and the desalination of seawater.

According to the Adaptation Fund’s project proposal, in 2010 77% of people in the Maldives relied on rainwater for drinking and so a scheme to redesign and improve the harvesting of this water was rolled out. The capacity for storage tanks in individual households was optimised and communal harvesting tanks were established and elevated using gravity, distributing a fair and even supply with pipes descending to each home.

Artificial recharge methods were discussed to reduce seawater intrusion into the limited number of aquifers and to improve the overall quality and usability of groundwater.

A plan to utilise seawater through desalination attempts was proposed and a system to assess the operational and maintenance flaws of previous desalination efforts was developed. A local Maldivian resident explained that “it is a good idea to have a desalination plant on the island because it works as a back-up supply of water in the dry season when there is no rain”.

This three-way integrated system was crucial in the project’s approach to lessen the threat of water shortages. “Due to the risks of climate change expressed in unreliable rainfall and sea level rise, the country will have to juggle with these three sources of water: rainwater, groundwater, and desalinated water, and scale hybrid methods and technologies of water production and delivery within localized atoll specific conditions,” said Keti Chachibaia, the UNDP’s regional technical advisor for climate change adaptation.

But perhaps the most significant success was the catalytic effect the Adaptation Fund project had on wider climate resilience prospects in the Maldives.

Two years after the Adaptation Fund’s original project was completed, the Green Climate Fund (GCF) signed a deal with the UNDP and the Ministry of Environment and Energy for $23.6 million to scale up the recently developed water supply system from the earlier project. The GCF project ‘sprang out of the AF project’ which “raised the profile around water resources, with a shift in policy thinking from a utility service provision towards an area that requires thought and investment into building climate resilience”.

According to a 2017 GCF press release, the project plans to expand the scale of previous efforts and promises to deliver safe freshwater to 105,000 inhabitants by 2022 – it will cover water demands for 30% of the entire population of the Maldives.

This is by no means the first time an Adaptation Fund project has built the foundations for, and inspired, replication or scale up schemes.

Other recent examples include successful Adaptation Fund projects to improve climate resilient water management practices in Colombia, enhance flood management in Georgia and reduce the risk of glacial floods in northern Pakistan – which are all being scaled up by the Green Climate Fund.

The Adaptation Fund Board has further approved a record $188 million in new projects this year alone, including in October a brand new $10 million pilot programme to foster innovative adaptation practices on the ground including through the private sector, as well as separate new project scale-up and innovation grants to extend its reach to countries and help meet the urgency of climate change.

Among the first recipients of the new innovation grants is the fund’s national implementing entity in Chile, the Agencia Chilena de Cooperacion Internacional para el Desarrollo (AGCID). The $230,000 grant will target improving water access in emergency situations in a vulnerable province of Valparaiso. AGCID has already been working to promote innovative adaptation practices, new tools and technologies to achieve water security at the national level through an ongoing $10 million Adaptation Fund project in vulnerable rural areas of the country.

The approval of the new innovation grant “will be key to strengthening the country’s urban adaptation strategies. The project focuses on improving safe access and will favour a particularly vulnerable group, exposed to drought and difficulty of delivery through the promotion of innovation,” said Violeta Leiva Milanca, AGCID program manager.

A beneficiary of the new scale-up grants approved by the board is the Ministry of Environment for Rwanda to build on the successes of its earlier project with the fund to reduce climate change vulnerability in northwest Rwanda.

This has been made possible by direct access, an approach pioneered by the Adaptation Fund that allows national implementing entities based in the countries themselves to directly access finance needed for projects and to develop and manage them based on their adaptation needs. The responsibilities that have come with this have empowered communities to build their resilience to climate change.

Projects financed by the Adaptation Fund are often the first on the ground creating models that can be scaled up or replicated by other funds due to the great demands for global adaptation – and although the Maldives is commonly seen as a poster child for climate vulnerability, the resilience within communities associated with the original Adaptation Fund project is fierce.