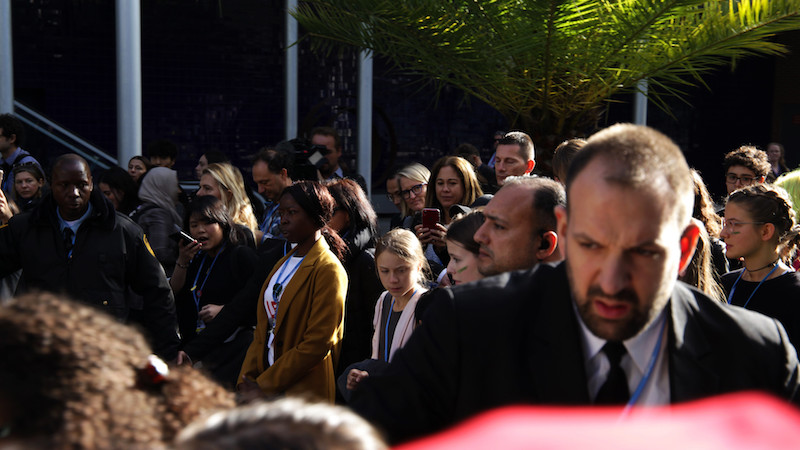 MADRID — Tens of thousands took to the streets of Madrid demanding urgent climate action on Friday. Yet inside climate talks across town, diplomats were struggling to respond.

“We don’t want more promises. It is your action that are going to save us,” Vanessa Nakate, a youth climate striker from Uganda, told negotiators at the UN’s Cop25 conference while protesters were gathering in the Spanish capital. Organisers claimed half a million people took part. Local authorities estimated the crowd was closer to 15,000.

But at the end of the first week of a fortnight of discussions on the narrow remit of finalising the rules of the 2015 Paris Agreement, countries could point to little progress.

Negotiators failed to agree a common timetable for countries to present new climate plans. Nor could they agree on when to agree. Meanwhile, entrenched political positions on global carbon markets means the talks remain in stalemate.

Comment: We really may have just 11 years to save the climate

Decisions that are not taken in Madrid will be pushed to a key summit in Glasgow next year when countries need to focus on collectively raising their targets, which currently set the world on course to be roughly 3C hotter.

But activists don’t want to wait, calling on governments to use this year’s UN talks to bring new political commitments to cut emission faster.

Speaking to reporters hours after arriving in Madrid, Swedish activist Greta Thunberg warned Cop25 was being treated as “some kind of middle-year event” ahead of the important Glasgow meeting.

Thunberg and the youth strikers have called on governments to take immediate action to bend the emissions growth curb and limit global warming to 1.5C.

HAPPENING NOW:
Madrid is crowded for the #COP25 demonstration. We won't turn our back to leaders stealing our future by ignoring the climate crisis. The climate justice movement is bigger and closer than ever! #WeAreUnstoppable pic.twitter.com/2gLKR5DVVG

But since the 16-year-old’s first climate strike outside the Swedish parliament in August last year, emissions have continued to rise and countries are failing to reverse the trend.

“We have been striking for more than a year and nothing has happened,” Thunberg told journalists in a room so packed the spill over had to watch her on a screen.

“There is no victory because the only thing we want to see is real action and real action has not been happening,” she said. “If you look at it from a certain point of view, we have achieved nothing.”

The call for action was heard by Sonam Phuntsho Wangdi, chair of the least developed countries group. “Our countries have been saying the same for years,” he told CHN. “But in the negotiation rooms we don’t see that urgency from others.”

There will be an opportunity for governments to respond next week at a special event on ambition.

The Chilean government, which is overseeing these talks, has asked countries to sign up to an alliance committing to increase the cuts they promised to the Paris Agreement in 2015. However CHN reported on Friday that Chile itself will no longer announce an updated pledge at the talks, in part due to domestic civil unrest.

Similarly, none of the world’s largest emitters have shown the political will to increase their existing pledges at the talks so far. While the EU strives to overcome internal tensions to ramp up its ambition, China, the US, Brazil, Australia and Japan remain unmoved.

Denmark showed another way was possible on Friday by adopting a new climate law that aims for an emissions cut far deeper than either the EU’s current target or its proposed enhancement.

Addressing young people on Thursday, head of UN Climate Change Patricia Espinosa admitted that 25 years after the coming into force of the UN framework convention on climate change “we have been struggling to urgently act to address climate change”.

For Benjamin Strzelecki, a 20-year-old Polish youth striker, the prospect of having to wait another lifetime to see countries taking concrete action to curb emissions is “scary”.

Amishi Agrawal, a 19-year-old Indian youth ambassador for the Centre for United National Constitutional Research said: “Young people want to save the lives of those who are being threatened by rising sea levels but negotiations discuss how best to accommodate limiting climate change within their plans for economic growth.” For her, bridging this disconnect requires giving young people a formal seat at the table.

One small island diplomat expressed her frustration at the slow progress, but told CHN it was “standard” in the first week of negotiations. “The urgency will come next week when the ministers arrive,” she said. “The Paris Agreement is a good framework, I don’t doubt this process can deliver.”

Ambassador Janine Felson, deputy chair of the alliance of small island states, told CHN the UN talks should not be considered a “barometer for what governments are doing to address the interests and the needs of young people”. Leadership came from action at home, she said.

“It doesn’t matter that we are sitting in rooms talking to other governments about issues on the climate agenda, we represent the youth and we act for our young people” towards a 1.5C world, she added.