After losing at two lower courts, campaigners are taking the fight to ban new oil exploration licences to the top, where it will be heard by all 19 justices 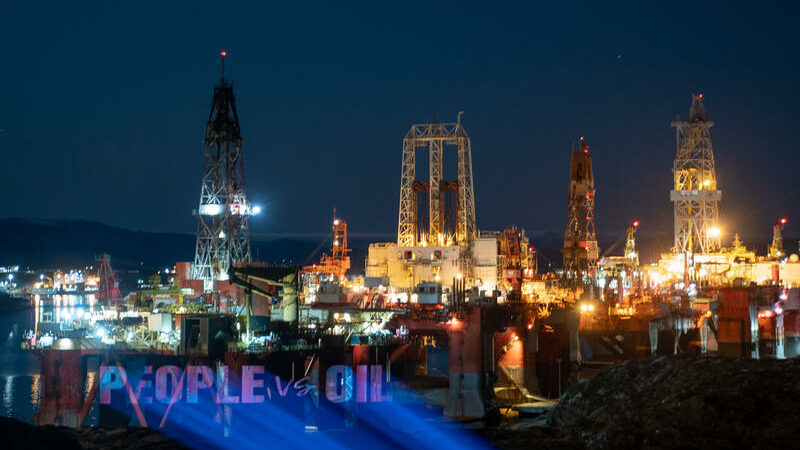 Greenpeace project a message onto oil rigs lined up for overwintering and repairs in a fjord on the west coast of Norway (Pic: Jason White/Greenpeace)

Greenpeace is taking the fight against Arctic oil drilling to Norway’s supreme court, after two lower courts rejected calls for a ban.

Together with Nature & Youth, the Norwegian branch of Friends of the Earth, the campaign group has been arguing since 2016 that Arctic oil drilling breaches the constitutional right to a healthy environment for future generations.

A district court and then an appeals court upheld the government’s right to award oil exploration licences in the Barents Sea.

Undeterred, with fresh backing from Swedish teen activist Greta Thunberg, the campaigners have secured a hearing in the supreme court.

All 19 supreme court justices are to hear the case. Frode Pleym, head of Greenpeace Norway, told Climate Home News this was a sign “they think it is super relevant”. Only around one in ten petitions to the supreme court are granted a hearing, typically by five justices.

The latest ruling in January scored a minor victory for the campaigners. Appeal judges agreed Norway was responsible for the environmental impact of its oil exports abroad – an argument the district court rejected.

Coronavirus: which governments are bailing out big polluters?

However, they said the scale of emissions associated with the oil licences in question was too low to justify the court intervening in government policy.

“That is what we are challenging,” said Pleym.

Emissions associated with Norway’s oil and gas exports are ten times the level of domestic emissions, according to Greenpeace. The campaigners argue there is no room for any expansion of the oil industry under the global warming limits set by the Paris Agreement.

The case gains prominence at a turbulent time for oil markets. Amid the coronavirus pandemic, demand has plummeted, storage filled up and prices even briefly turned negative in the US, prompting oil majors to cancel frontier projects.

“Some of these licences might not be used because it is not economic,” said Pleym, “but the whole issue with the Norwegian oil policy is that it is not only not rational for what is best for the climate, it is increasingly not rational in economic terms.”

Greenpeace and Nature & Youth have raised money for the legal battle through crowdfunding and received a 250,000 kroner ($23,000) donation from the Greta Thunberg Foundation.

Thunberg dedicated her share of prize money from the Fritt Ord Award, which promotes freedom of expression, to the cause.

In a statement, she said: “Science is clear that fossil fuels have to stay in the ground. As a major oil producer and exporter, Norway needs to make the transition away from polluting fossil fuels, and show the way for other fossil-dependent economies.

“I am happy that this grant will go into the fight against new oil drilling and for a safe and healthy environment for future generations.”