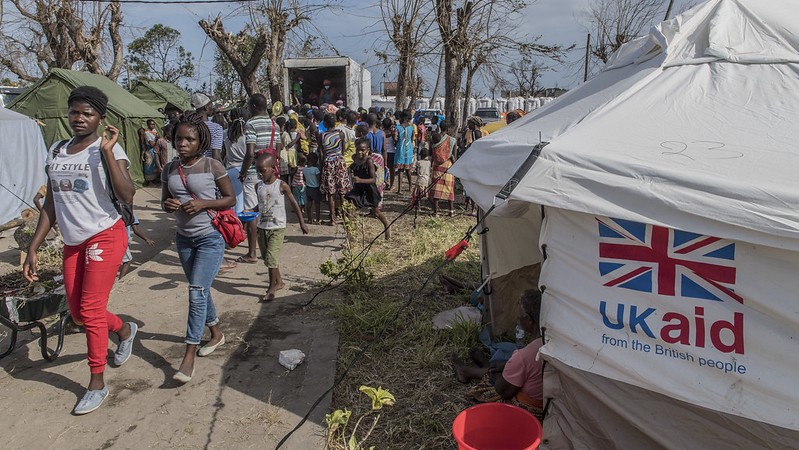 The UK government has promised to uphold its commitment to climate finance, in response to concerns over the planned merger of the international development and foreign affairs ministries.

Prime minister Boris Johnson’s announcement of the closure of the Department for International Development (Dfid) last week caught the development sector off guard.

Aid experts expressed fears the UK was turning its back on the world’s poorest, just as a global economic downturn following the coronavirus pandemic made them more vulnerable.

A spokesperson told Climate Home News the government remains committed to a pledge made last year to double its contribution to international climate finance to £11.6 billion between 2021 and 2026. In a statement, they said the money would support “clean growth, reducing carbon emissions and helping the poorest countries manage the impacts of climate change”.

Foreign secretary Dominic Raab, who will oversee the new department, walked back comments from Johnson suggesting aid would be redirected to middle income countries that could further British strategic interests.

Yet questions remain over how UK climate finance will be allocated, as the overall aid budget shrinks.

The Department for International Development (Dfid) is responsible for running programmes that help vulnerable countries cope with the impacts of climate change. Last year, it spent £11 billion – about 73% of the UK’s total overseas development assistance.

As the UK prepares to host critical UN climate talks, known as Cop26, in November, the merger raises the prospect of linking aid with diplomacy to leverage climate action. There could be tension with other diplomatic goals, such as striking favourable trade deals after Brexit.

The UK is committed to spending 0.7% of its national income on aid, but the absolute value of that is contracting along with the economy. Government departments have reportedly been asked to identify 30% cuts to their aid budgets. Priority areas to safeguard include climate change, efforts to tackle Covid-19, girls’ education and poverty reduction.

Aid money used to develop carbon-cutting initiatives, managed by the UK’s energy department, is already largely directed at middle-income countries with growing emissions. According to government figures, the energy department spends around a third of the UK’s international climate budget, while 63% is managed by Dfid.

While low-income countries still receive the majority of UK aid, a growing share is being directed to middle-income countries seen as critical to British interests from a security, economic and emissions reduction perspective, according to a parliamentary report published earlier this month – a trend that could accelerate as the government aligns aid spending with foreign policy objectives.

The report urged government to direct aid “to countries where there is the greatest likelihood of reducing poverty”.

The UK’s Independent Commission for Aid Impact (Icai) warned in February 2019 of creating a vacuum for low carbon development in low-income countries. It also found the foreign office to be failing to meet aid transparency targets.

The government is hoping to encourage countries to submit more ambitious climate plans ahead of critical UN climate talks in Glasgow, UK, in November 2021.

Earlier this week, the government’s official climate advisors, the Committee on Climate Change, said the UK needed to be “an exemplar in continuing to provide climate finance” to the most vulnerable communities, as the impact of Covid-19 on the global economy will reduce available funds.

“The UK has a strong established reputation as one of the largest development aid donors and is respected for its efforts to help support vulnerable countries dealing with the impacts of climate change. This has helped the UK play an important role in the international climate negotiations that resulted in the global Paris Agreement on climate change,” the committee wrote.

A government spokesperson said the ministerial merger will help the government “seize the opportunities” ahead of the Glasgow climate summit. The Cop26 presidency has made adaptation and resilience to climate change a key pillar of next year’s summit.

However, Johnson’s comments that aid to Zambia and Tanzania could be redirected to Ukraine and the Western Balkans risks undermining the UK’s alliance-building efforts, said Andrew Norton, director of the International Institute for Environment and Development (IIED).

It is “a perverse and damaging signal to give to the poorest countries,” he told CHN. “Continuing to direct climate finance to the vulnerable countries that need it will be profoundly helpful in building the alliances crucial for making the next climate summit a success.”

Thabit Masoud, programme director at charity Care in Tanzania, told CHN if there was to be a reduction in aid to Tanzania, “it’s obviously the poorest and mostly the vulnerable rural women who would suffer the most”.

“The UK’s leading role as a climate finance contributor must not depend on the strategic value of poor countries to the UK,” he said.

Andrew Scott, director of the Overseas Development Institute’s climate and energy programme, said it would be “embarrassing” for the UK to change its priorities in the run-up to Cop26 and money was unlikely to be redirected between now and the summit next year.

“I don’t think you can change the course of a super tanker very quickly,” agreed Kate Levick, who leads think-tank E3G’s sustainable finance programme. But changes could appear in the longer term, she said.

The government has said it would maintain current rules overseeing UK aid and climate finance. Maarten van Aalst, director of the Red Cross’ Climate Centre, said the merger presented an opportunity for a joined-up approach that would “use the diplomatic machinery with the aid budget to achieve a common objective”.

But the “carrot” approach is unlikely to be effective in raising ambition, argued Scott, noting many developing countries already have climate targets that are conditional on receiving additional finance from richer nations.