Only a few thousand Muslims are attending this year’s pilgrimage, not the millions Riyadh needs for its ‘Vision 2030’ economic diversification plan 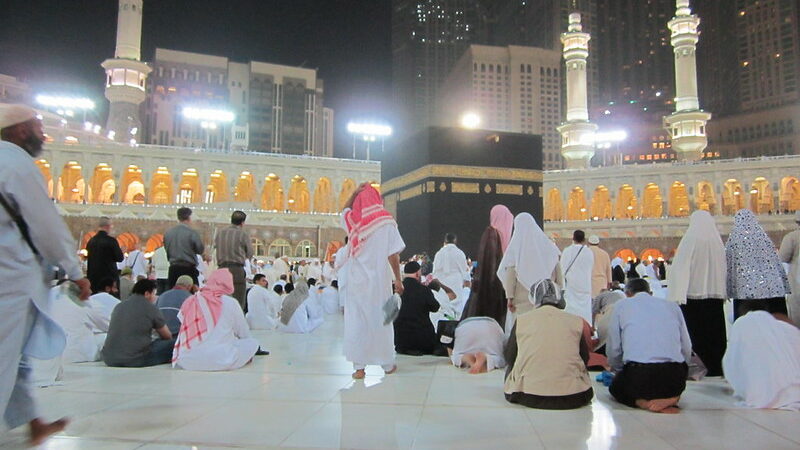 The courtyard of the Masjid al-Haram in Mecca is usually busy with pilgrims (Pic: UmmSqueaky/Flickr)

In efforts to contain the spread of the novel coronavirus, this year’s hajj, taking place between 28 July and 2 August, is open to just a few thousand people living in Saudi Arabia.

Typically, nearly two million Muslims visit Mecca for the annual pilgrimage, a pillar of the Islamic faith. Another 1.8 million come throught the year for smaller pilgrimages (umrah). Covid-19-related restrictions are creating a gap in what is one of the most important sources of revenue, besides oil, for Saudi Arabia.

“We haven’t had a guest since March,” said a hotel manager for a four-star hotel in Mecca, who asked not to be named. “Both Ramadan and hajj, which are our most profitable times, have been spent more or less in a lockdown.”

The collapse of religious tourism is a blow to Saudi plans to diversify the economy away from oil. At the same time, a slump in the oil price shows the risks inherent in continuing to rely on fuel exports for revenue.

Analysis: This oil crash is not like the others

With the International Monetary Fund predicting a 7.6% shrinkage of the overall Gulf economy this year due to the coronavirus outbreak, Riyadh has several reasons to worry.

“Indeed, the imposition of state lockdowns to lessen the spread of Covid-19 led to a great deal of travel and mobility restrictions; consequently contributing in part to reduced global oil demand and oil prices, which in turn has negatively affected Saudi oil revenues,” says Matthew McIntosh, a political risk analyst for the Atlas Institute for International Affairs.

The decline in oil prices, combined with slowdowns in both domestic and global economic activity due to Covid-19 containment policies, caused the Saudi economy to contract by 1% in the first quarter  of 2020. Q2 numbers are not expected to be any better.

And with oil exports dropping by 41.2% in May, Saudi Arabia is now said to be “considering all options” to support its economy.

Finance minister Mohammed Al-Jadaan outlined some of the measures under consideration during a virtual forum organized by Bloomberg last week.

Plans include the possibility of privatizing state-held assets in the healthcare, education, and water utility sectors. That could raise as much as $13.3 billion over the next five years, said Al-Jadaan, who also hinted that the country might introduce an income tax.

Saudi Arabia, like other Gulf states, has traditionally been tax-free for individuals and thus an attractive haven for foreign workers. Government sources categorically denied having any plans to change that.

“Income tax is not, at all, being discussed at any of the government councils or committees,” an official in Riyadh, who was not authorised to speak on the record, told Climate Home News.

These financial challenges are raising concerns among experts on whether Saudi Arabia will continue to work on its “Vision 2030” diversification plan. The plan is meant to create new industries and jobs in the kingdom, with entertainment and tourism one of the focus areas.

While both sectors enjoyed a temporary boom after tourist visas were launched in 2019, travel restrictions are creating a dent in the non-oil sector growth projections.

“Economic diversification is an expensive initiative – even during times of economic prosperity, as government capital can be directed towards diversification projects. Yet, with this economic contraction and a reduction in oil revenues, the country’s budget is certainly challenged,” added McIntosh.

A BNN Bloomberg analysis of an Okaz newspaper report indicated that $8 billion is being cut from Vision 2030, meaning that various projects could be delayed or cancelled.

Lola Vallejo, director of the climate programme at French think tank Iddri, however, said the dramatic fall in the global demand for crude oil should “hit home that relying on oil for nearly three-quarters of government’s revenues makes Saudi Arabia dangerously vulnerable economically and socially”.

“It is vital for Saudi Arabia to deploy economic diversification policies, in order to tackle structural issues such as youth unemployment,” she said. “Logically, this should cause Saudi Arabia to ramp up plans to diversify its economy and follow the international momentum to put clean energy at the center of the economic recovery.”