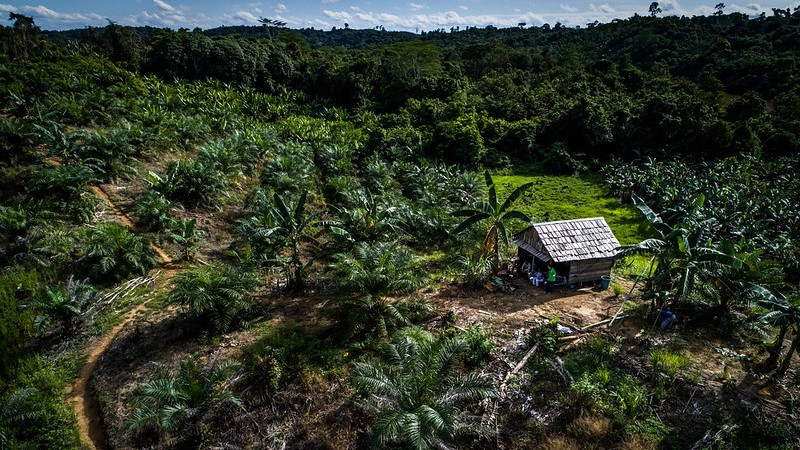 A hut in the middle of oil palm plantations in Buluq Sen village, in East Kalimantan, Indonesia (Photo: Nanang Sujana/CIFOR/Flickr)

That was the charge put by campaigners as the Green Climate Fund approved $103 million of funding to Indonesia at a virtual board meeting this week.

A letter to GCF board members signed by 85 civil society groups, including 15 from Indonesia, called it “shameful” for the board to reward governments “that continue to heavily engage in and promote large-scale deforestation”.

The UN-backed programme known as Redd+ incentivises countries to conserve forests, which limit global warming by drawing carbon dioxide out of the air. Under a “payment-by-results” mechanism, nations retrospectively get cash for avoiding emissions from forest loss and degradation during a set period of time compared with an agreed baseline.

In recent years the GCF, which was created to help poor countries curb their emissions and cope with the impacts of climate change, has accepted bids for money under the scheme.

Civil society groups and some GCF board members warned countries have been allowed to cherry-pick data to make the results on paper look better than the reality on the ground.

A pilot funding window for Redd+ projects has so far paid out nearly $230 million to Brazil, Ecuador, Chile and Paraguay. In each country, deforestation has risen following the claim period, according to Global Forest Watch data.

The payment to Indonesia approved on Wednesday was based on 20 million tonnes of avoided carbon dioxide between 2014 and 2016, compared to historical rates of forest destruction. The proceeds are to support decentralised forest governance.

Yet deforestation in Indonesia has recently spiked under the cover of Covid-19 lockdown and the government is seeking to roll back environmental regulations for businesses.

Board members expressed “serious concerns” about the Indonesian proposal, including the methodology for calculating avoided emissions and the implementation of safeguards to protect local communities and indigenous people.

A separate decision on paying $28 million to Colombia was suspended twice during the GCF meeting, which runs until the end of the week. Members were considering payments for the period 2015-16, despite a sharp rise in deforestation in 2017.

Board member Tobias Von Platen-Hallermund, of Denmark, noted both countries had recently seen an increase in deforestation. He added the GCF should focus on countries “that have been successfully keeping deforestation rates low during the [GCF’s] reporting period to claim payments” which runs from 2014 to 2018.

Hans Olav Ibrekk, of Norway, said that although he welcomed Indonesia’s past efforts to reduce emissions from deforestation, “the project has some characteristics that in our view affect the environmental integrity of the results”.

He cited inconsistencies in the way the baseline has been calculated for funding bids through different organisations.

Norway, in a bilateral deal with Indonesia to curb deforestation, uses a 10-year baseline 2006-2016 to calculate emissions reductions.

The bid to the GCF measured avoided emissions against the average over 20 years from 1993 to 2012 – a period Ibrekk said was too long. A third and even longer baseline is used by UN Climate Change, covering the period 1990-2012.

In technical guidance, the GCF recommends choosing a baseline period of 10-15 years and not exceeding 20 years.

Jutta Kill, a researcher at the World Rainforest Movement, told Climate Home News, countries were allowed to “pick and choose” a reference level to calculate emissions that would “maximise funding flows” rather than “present a reasonable reflection of emissions that have been avoided… That is unacceptable,” she said.

Addressing the meeting on behalf of civil society, Erika Lennon, a senior attorney at the Center for International Environmental Law, questioned the validity of the baseline. She added the scheme “did not address the real drivers of deforestation”.

The civil society letter noted the governments of Indonesia and Colombia had chosen both the period for which they claimed emissions reductions and the baseline against which to compare emissions.

“This opens the door for skilful manufacture of calculations that will result in an outcome that is favourable to the respective country. What is shameful is that the GCF accepts such games and allows governments to ignore the overall far more complex dynamic of the deforestation process in time and space,” it said.

Responding to civil society concerns, the UN Development Programme, which is supporting the Redd+ programme in Indonesia, insisted the baseline used was “valid” and “complete”.

Scrutiny over the effectiveness of Redd+ comes as the GCF is due to start a consultation process at the end of September to decide whether to continue its Redd+ pilot funding programme beyond 2022.

A number of board members expressed their support for Redd+, describing it as a fundamental tool for climate action. Others were more cautious.

“More than ever we should be guided by funding proposals with the highest possible impact and environmental integrity,” warned board member Paola Pettinari, of Italy. Otherwise the GCF will be faced with “huge reputational risk,” added Stefan Schwager, of Switzerland.

For Kill and a number of other NGOS, the GCF should stop approving Redd+ funding requests altogether. “GCF is dishing out money for a concept that is not working,” she said. “Funding that should be available for countries to deal with the changes that climate chaos demands is wasted for paying for emissions reductions that exist on paper only.”