In the Brazilian Amazon region, currutelas are tiny settlements that spring up at the edge of the forest, close to small-scale artisanal mining operations (garimpos) or deforested areas.

Vila Renascer was created in 2016 and hasn’t stopped growing since. Every day new houses appear, plus Evangelical churches, bars, restaurants, a garage, a gas station, a general store, electricity poles and even a small hotel. By law, however, none of it should exist: the settlement is located in the Apyterewa Indigenous Territory (TI), belonging to the Parakanã people and officially ratified in 2007.

The presence of non-indigenous people in Apyterewa began at the start of the 1980s. Their removal was one of the conditions of the environmental licence given for building the hydroelectric dam of Belo Monte on the Xingu River, which cuts through the region. Instead of that, however, the invasion exploded.

During the administration of President Michael Temer, the Justice Ministry ignored the Supreme Federal Court (STF)’s decision and interrupted the removal of squatters and bad faith invaders – people who went into the area knowing it was indigenous territory.

After the government’s retreat, new invasions took place and new garimpos were opened. This movement exploded in late 2018 and early 2019, when President Jair Bolsonaro promised to review the demarcation of indigenous lands. The deforestation spread to Trincheira Bacajá, the area belonging to the Xikrin indigenous people, while the illegal market for plots inside indigenous lands grew and gained strength. 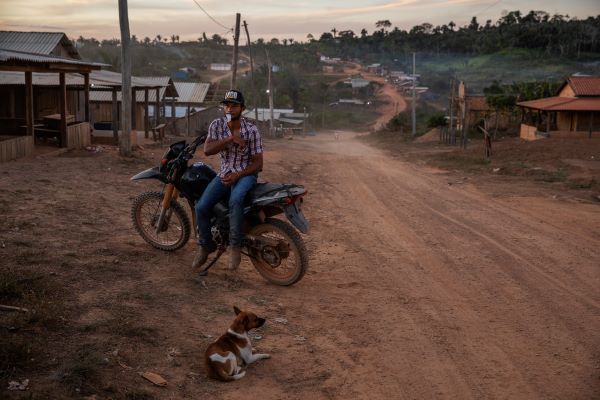 A resident prepares a cigarette in Vila Renascer, a village formed by invaders inside the Apyterewa Indigenous Land, Para state (All photos: Lalo de Almeida/Folhapress)

The result of all this is that in 2019 Apyterewa lost 8,420 hectares of forest, an area comparable to 53 Ibirapuera parks – the highest rate of deforestation since the ratification of the indigenous territory, 13 years ago. In Trincheira Bacajá, 5,600 hectares of forest were destroyed, and the area suffered the greatest loss of vegetation since its ratification as an indigenous land, in 1996. The numbers were provided by the INPE (Brazilian National Institute of Space Research)’s Prodes system, which takes measurements from August of one year to July of the following one.

“When I first arrived here there was just a church and one neighbour,” says pastor Valdir dos Santos, 46, who has lived in the village for four years. “We’re almost coming to 2,000 houses now, thank God.”

Born in Belém, the state capital, Santos first worked as a hairdresser in the settlement. He then obtained a plot of land where he has planted cacao, manioc and banana. On top of that he manages one of the four Evangelical churches, serving what he reckons to be 40 faithful.

The pastor says Renascer has welcomed even families from other states, in the hope that Bolsonaro will regularize the invasion. “Folks here believe in the President’s promise,” he said, chatting on the verandah of the shack on his plot of land. “We are waiting for this to happen.”

At the entrance of the small wooden building that houses the Mission Church, Santos placed a banner with the following Biblical passage: “He said, How dreadful is this place! This is none other but the house of God, and this is the gate of heaven”. 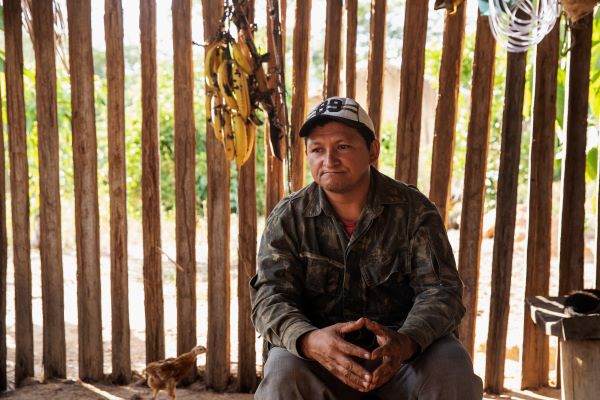 The pastor Valdir dos Santos in his plot near Vila Renascer

Supplied by an illegally drawn electric grid, Renascer became the logistic base of the invasion and illegal appropriation of indigenous lands. To penetrate the forest, the invaders reactivated a long road opened up in the 80s by illegal mahogany loggers. Starting in Apyterewa, the road passes through the Igarapé Ipixuna TI, belonging to the Araweté Indians, seen as having been recently contacted, and reaches Trincheira Bacajá.

One resident said he acquired a plot 130 km from the settlement “in the region of Ipixuna”, an area ratified to the Arawetés. On the road to the settelement our reporters found a family in a loaded Fiat Uno that was moving into the region, having negotiated a 163-hectare plot for R$15,000.

The state’s presence in Vila Renascer is limited to a permanent base with employees of Funai (the government agency to protect indigenous interests) and National Force police officers, with no power to interfere with the flow of invaders.

Located at the top of a hill a few hundred meters from the village, the base includes a house and is protected by a wire fence. At the entrance is the sign “Protected Land – access forbidden to outsiders,” commonly placed at the borders of indigenous lands.

The area of Apyterewa visited by Folha is covered mainly by pasture. Trucks loaded with cattle passing through are a common sight. The municipality of São Félix do Xingu, which most of Apyterewa is part of, has the largest concentration of cattle in the country, with 2.3 million bovines in 2018. Over ten years, the number of cattle grew 18%. The numbers were provided by IBGE.

Due to the Covid-19 pandemic, Folha did not visit the Parakanã communities. 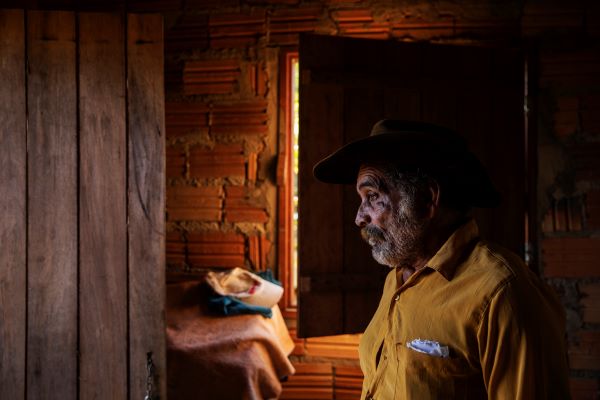 The squatter Altamiro Alves da Silva, who owns a lot inside the Trincheira Bacaja Indigenous Territory, in the state of Pará

The arrival of invaders, usually poor farmers, is encouraged by ranchers with lands inside the Apyterewa TI, according to residents.

“We are very happy with this. We would like to congratulate them, as it’s something very good they have done for the people,” says a settler from Goiás, Edson de Morais, 51. “They just gave us the land, they didn’t take a cent – they gave it to the people. Since people began entering the area, they began helping out. Then the land began to be divvied up until the areas were full.”

Morais mentioned four ranchers: Paulinho, Joãozinho da Motolândia, seu João, from Palmas (state of Tocantins), and Ourias. All, he says, distributed plots of land in four areas within Apyterewa. “We are pleased when people help out the weakest.”

Morais lives in a humble brick house in Vila Sudoeste, a district of São Félix do Xingu that grew out of a settlement created by the land reforms agency. It is at a distance of 60km from Vila Renascer, close to Trincheira Bacajá.

Born in Goiás, he told us he bought the 272-hectare plot three years ago. He gave 54 hectares to two pastors and deforested 11 hectares, in which he has planted vegetables and pasture. He says it’s the first time he has had land of his own.

Last year the Xikrin organized an expedition to expel the invaders. They destroyed a few shacks, but Morais and other invaders put up a resistance. There were also some operations by the Federal Police and the environmental protection agency, based on a court decision to repossess the land. But Morais persists, putting his faith in the present federal government.

“What everyone hopes is that Bolsonaro will do what he’s always promising people, that is reduce the Indians’ land,” he said. “Our hope is that he reduces the Indians’ land so that they realize the cost of a packet of rice, so they don’t come to people’s homes and invade everything.”

A recent investigation by Brazil’s intelligence agency found cases of settlers being coerced to work on the land in exchange for a plot and forced to contribute to an association. But the promised plot ends up being sold to someone else, and the squatter is thrown out. 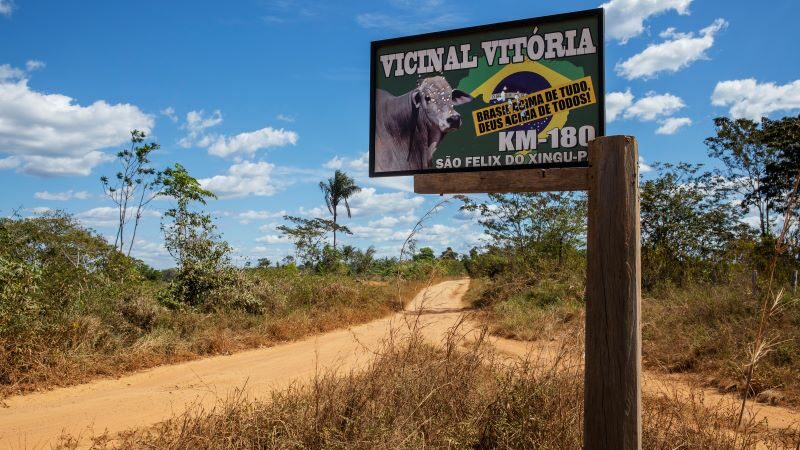 A road sign inside the Apyterewa Indigenous Territory, with shooting marks and a sticker supporting President Jair Bolsonaro

In June of 2019, one of the main leaders of the landgrabbers in Apyterewa, Carlos Cabral, was gunned down in Rio Maria (Pará). At the time, the Civil Police ordered the temporary arrest of three ranchers accused of promoting landgrabbing. Around 40 guns, besides munition, were seized in the operations.

The reduction of Apyterewa TI, that covers 773,000 hectares, has been defended by associations led by ranchers. The initiative has the legal support of the Mayor’s office of São Félix do Xingu, held at present by Minervina Barros.

On May 26 the ranchers obtained a partial victory in the the supreme court. At the request of the Mayor’s office and one of the associations, minister Gilmar Mendes, chief justice of the STF, requested the Union “consider the conciliation attempt proposed by the municipality of São Félix do Xingu”.

The decision is part of an injunction filed in 2007 by the Mayor’s office and the associations. The legal action questions the ratification of indigenous land sanctioned that year.

For district attorney Igor Franco de Freitas, the case taken to the STF aims to have the anthropological study of Apyterewa reviewed. The associations say most of the area demarcated has never had any indigenous presence and that most of the settlers took ownership of the land in good faith.

“If it is proven that the Indians have traditionally occupied all the 773,000 hectares, all the presidents [of the associations] will give up their rights,” said Freitas, interviewed in the Mayor’s office of São Félix beside three leaders of the settlers.

Minister Mendes’ decision was challenged by the Prosecutor General of the Republic, Augusto Aras. In a legal opinion, he defended the inclusion of the Parakanãs and the Federal Public Prosecutor’s Office in the conciliation case and proposed a public hearing.

The Union has not yet announced a position on the decision of minister Mendes. According to Freitas, the deadline for this position to be stated is the 14th of this month.

One of the main leaders of the settlers in Apyterewa, rancher Vicente Paulo Lima, known as Paulinho do Ditão, was present at the meeting at the Mayor’s office and denied any plots were distributed among invaders. “How could we be donating plots if they are have owners? The people have been around since 1980.”

Lima’s name appears in Funai’s list of 168 good faith occupiers who purportedly have the right to an indemnization, since they were present in the area before the Declaratory Ordinance of the Indigenous Territory, in 2001. But the rancher says there are now 2,500 families occupying land within the Apyterewa TI.

The rancher is one of the suspects being investigated for the murder of Cabral and had his temporary arrested ordered, but was never detained. Speaking to Folha, he denied any part in the crime.

The Parakanã are a Tupi-Guarani people and are divided into two groups. The group living in Apyterewa are the Western Parakanã, with 728 members at present. This group’s first contact with national society is recent, dating from the early 80s.

The Parakanã at the moment are in possession of only 20% of their territory and put forth a statement criticizing Gilmar Mendes’ decision. “We, the Parakanã people, do not accept the conciliation attempt, sice other agreements were made in the past, but even so settlers continued to invade our land,” says the statement issued by the Tato’a Indigenous Association.

This reporting is part of The Amazon under Bolsonaro, a collaboration between Folha De S.Paulo and Climate Home News. Monica Prestes contributed to this article. Translated from the Portuguese by Clara Allain