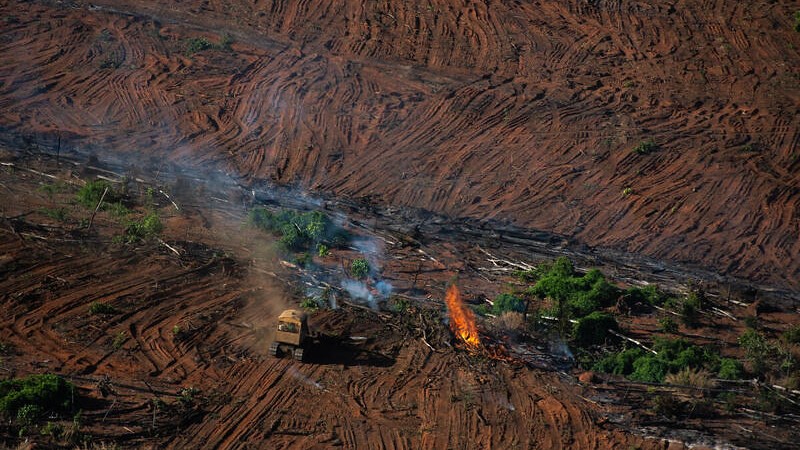 Countries need to find $700 billion to reverse human destruction of the natural world.

That was the message of UN agencies during a pledging conference for governments, businesses and philanthropic organisations to bolster financial commitments for the protection and restoration of nature on Monday.

In 2019, these actors spent between $124 and $143 billion per year on activities that benefit nature worldwide, according to recent analysis by the The Nature Conservancy, the Paulson Institute and the Cornell Atkinson Center for Sustainability.

But the research estimated to halt the destruction of plants and animals and restore nature, the world needs to mobilise an additional $600 to $824 billion a year.

Despite calls on governments to significantly step up contributions to halt the decline of plants and wildlife, only a handful of European countries committed to increase their financial flows to protect nature.

“We currently spend less than $100 billion a year on nature – about what we spend on pet food globally,” said Achim Steiner, head of the UN Development Programme, which organised the event.

$700 billion annually is “less than 1% of global GDP and only a fraction of the $5.2 trillion that we spend on fossil fuel subsidies every year, even this year,” he said.

The event follows the publication of a UN report earlier this month finding the world has missed every one of 20 biodiversity targets to 2020 agreed in Aichi, Japan, in 2010. Funding shortfalls and harmful subsidies were identified as significant barriers to progress.

The pledging conference was the first key moment to drum up more funds ahead of major UN biodiversity talks in Kunming, China, provisionally scheduled for May 2021, when governments are due to agree on a new set of biodiversity targets to 2030.

A high-ambition coalition led by Costa Rica and France and endorsed by UN secretary general António Guterres, the EU, the UK and Canada among others, is seeking a headline target to protect 30% of the world’s land and oceans by 2030.

Elizabeth Mrema, executive secretary of the UN Convention on Biological Diversity (CBD), said financing to meet the biodiversity goals needed to come “from all actors” and hoped the event “will motivate further deliberations and especially commitments to help close the the biodiversity funding gap,” she said.

He announced the launch of a joint initiative with public and private funders called the Legacy Landscape Fund to leverage long-term financing for protected areas in developing countries. Many lack financial mechanisms to protect nature, he said.

The announcement was welcomed by Brian O’Donnell, director of the Campaign for Nature, who said governments, business and global organisations need to align their financing goals.

A study commissioned by the Campaign for Nature found that around $140 billion a year was needed to expand protected areas to 30% of the planet, mostly in low and middle-income countries. Current spending is only around $25 billion.

“If we close that finance gap, the financial return will be five to one,” he told Climate Home News.

Norway said it would work to create a coalition to end tropical deforestation over the next year.

The UK promised to increase biodiversity finance as part of a commitment to double funding for climate change over the next five years and said it will ask others to do the same.

Environment minister Zac Goldsmith added the government was also working to remove damaging subsidies and replace them “with a system that rewards environmental stewardship”.

Mrema, of the CBD, told political leaders the success of the new biodiversity framework relied on the mobilisation of additional resources and “the reduction or redirection of $500 billion causing harm to biodiversity, including negative incentives or subsidies” — $100bn of which, she said, were in the agricultural sector.

Data from the OECD analysed by The Nature Conservancy showed that in 2019 governments spent up to four times more money on agricultural, forestry and fisheries subsidies that degrade nature than on spending that protects it, an estimated $274–542 billion annually.

These included incentives for production or consumption that exacerbates biodiversity loss through land and ocean degradation, unsustainable exploitation of resources and water use, pollution and deforestation.

Poland agrees coal mining phase out with unions by 2049

To close the biodiversity financing gap to 2030, researchers estimate governments would need to cut harmful subsidies in the agricultural, fisheries and forestry sectors, by $273.9 billion annually.

“Agriculture is the biggest threat, need and opportunity” to halting biodiversity loss and restoring land and habitats, Andrew Deutz, director of conservation finance, at the Nature Conservancy, told CHN.

By transforming harmful subsidies to the agricultural sector into incentives for protection of nature, governments can help inverse the trend, he said.

Deutz added the funding conference had been a “start” but many donor countries may be unwilling to unveil pledges ahead of the biodiversity talks in Kunming.

“I am pretty optimistic that there is more finance that is going to be forthcoming in the run up to the negotiations. What we are seeing now is pre-positioning for Kunming,” he added.

On Monday, 64 political leaders pledged to transition to sustainable patterns of production and consumption and to end subsidies and incentives harmful to nature, biodiversity and climate change and increase those with a neutral or positive impacts.