In this Indian fishing community, radio is saving lives and livelihoods 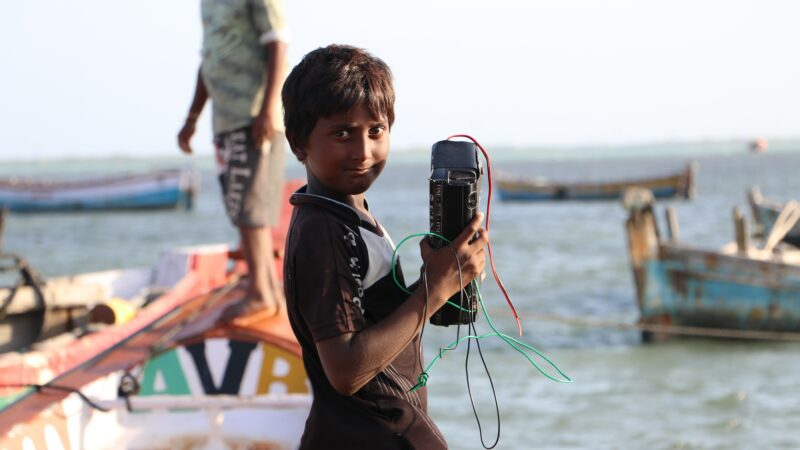 On the evening of 4 December, 2018, Cyclone Gaja blew in from the Bay of Bengal to wreak havoc along the coast of the southern Indian state of Tamil Nadu.

The island of Pamban, a remnant of a land bridge that used to connect India and Sri Lanka, was not spared.

Fierce winds brought back memories of 1964, when a severe storm killed 800 islanders, overturning a passenger train and devastating the town of Dhanushkodi.

“We’ve seen many cyclones but that night, just for a few hours, it was really bad. We had little warning about how furious it would be,” says radio jockey P Lenin, who is 28 and hails from Pamban village.

“When I got information that if all boats on the northern side of the island were shifted away, they should be safe from the storm, I immediately got onto the radio and began broadcasting this message repeatedly.”

Almost all of the nearly 83,000 people in Pamban island depend on fishing for their livelihoods. The loss of a boat can be debilitating. Lenin’s repeated messages helped save numerous boats.

He broadcast through the night, warning his community of locations where electricity poles and trees had collapsed, potentially saving many from severe injuries or worse. Lenin says: “As soon as the eye of the cyclone passed us, I immediately went to check on the boats and help other fishermen bring them in safely. I’m as much a fisherman as I’m a RJ. I felt broadcasting on the radio was the most useful thing I could do for my people that night.”

A seaweed farmer holds up a rope with his harvested crop (Pic: CMFRI)

Kadal Osai (Sound or Music of the Sea) FM is a four-year-old community radio station that caters to the people of people of Pamban island. Founded by a leader from the fishing community, P Armstrong Fernando, community radio stations such as Kadal Osai have emerged as a reliable and easy-to-connect source of information for various rural communities in India, especially in the times of climate change.

The Indian government has weather warning systems but relies on partners to communicate the information to the people who need it most – the fishing communities. Community radios and NGOs perform a crucial role here, disseminating government alerts to coastal communities in simple terms and local languages.

Radio channels such as Kadal Osai FM go the extra mile, by putting hyperlocal alerts in a global context. “If we talk about climate change or the ice melting in the Arctic, no one really understands how it affects their lives but when we make the fisher people understand how their villages and livelihoods are affected by cyclones, extreme heat and sea erosion and connect that to climate change, then they realise the importance of the issue,” says Gayathri Usman, the radio station’s chief.

While the station caters to diverse interests, all of them are focused on one section or the other of Pamban island’s fishing community. Pride of place in their programming schedule is Samudhiram Pazhagu (Understand the Sea), in which scientists from marine research organisations in the region are regular guests.

The show offers solutions to the fishers for developing resilience to extreme weather by learning and investing in alternative, sustainable livelihoods.

“We have invited fishermen who practise sustainable fishing activities such as cage farming and seaweed cultivation onto our shows. Our hope is that more people will be inspired by them. We also want to provide people with the know-how to begin fishing sustainably,” says Gayathri.

“While the Covid-19 pandemic has affected us like everyone else, we have plans to organise multiple training camps for the woman of the island to learn seaweed farming and develop crafts such as making sea-shell jewellery as soon as we can.”

Suganthi Ravi, a 37-year-old fisherwoman, is a regular listener of Kadal Osai FM. She ventures to the shallow seas near her village for three months every year to practice seaweed farming.

“My husband is a fisherman and in the last 15 years or so his catches have been consistently reducing. While I’ve always practiced seaweed farming, I’m taking it up more seriously now and have also taken to making jewellery out of sea shells.” Ravi says her entire family loves listening to the radio channel.

She adds: “My children have found the educational shows and the shows talking about government grants and fellowships for children from the fishing community useful. I’ve found some of their episodes about alternative livelihoods very informative. More than anything else, they understand us and always talk in a jovial, entertaining manner which we really enjoy. Also, if we want to get in touch with them about anything, it’s very easy to do so.”

Jayakumar Rengarajan, senior scientist at the Central Marine Fisheries Research Institute (CMFRI) says community radios such as Kadal Osai are playing a crucial role in developing resilience against the changing climate in the fishing community.

“As far as I know, this is the only community radio station in India catering exclusively to the fishing community. While we research and provide scientific perspectives to various issues concerning fishermen, it’s radio stations such as this that take this information to the people,” says Rengarajan.

The CMFRI is a leading fisheries research organisation and looks into diverse issues including but not limited to marine biodiversity conservation, mariculture and research on fishing patterns and fish availability.

Rengarajan adds: “Resilience is something that is urgently needed for India’s fishermen and we are developing sustainable fishing models which we want to take to the community in this region. This radio station, by interviewing our experts as well as communicating our ideas to the fishing community, is providing a vital service. Scientists like us can have all the information, but explaining complicated ideas to people in a way in which they understand is extremely important.”

Sibi Arasu is an independent journalist based in Bengaluru. He tweets @sibi123.

This article is part of a climate justice reporting programme supported by the Climate Justice Resilience Fund. You can find our policy on reporting grants here.