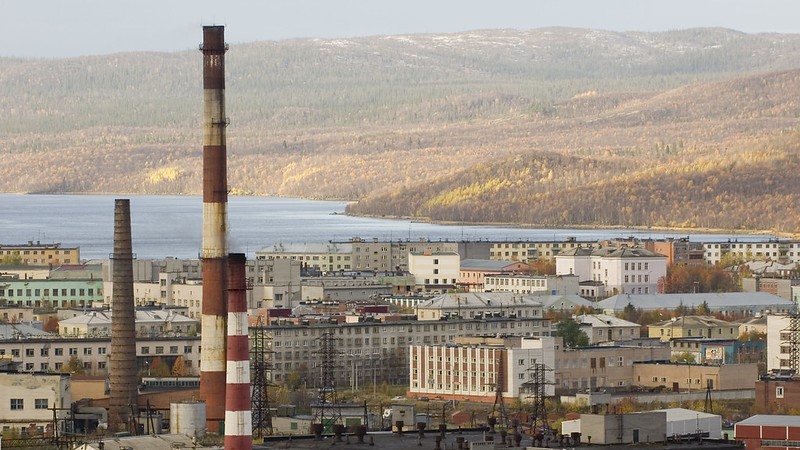 LNG terminals are being developed in the city of Murmansk, in the Arctic circle, to export Russian gas (Photo: Marcel Crozet / ILO/Flickr)

Russia has no plans to achieve carbon neutrality before the end of the century and is betting on Asian demand to support a huge expansion of its Arctic gas industry.

It was only in September last year that Vladimir Putin used executive powers to formally endorse the Paris climate agreement, under which countries have committed to limit global heating “well below 2C” and strive for 1.5C by the end of the century.

Since then, Moscow has done little to align its climate plan with the Paris deal. Instead, it has continued to support fossil fuel expansion, spending $8.4 billion to prop up its oil and gas industry during the Covid-19 pandemic.

Earlier this month, Putin signed another executive order to reduce emissions by 30% from 1990 levels by 2030. That is the more ambitious end of its existing target but still allows emissions to rise significantly, as Russia’s emissions plummeted following the collapse of the Soviet Union and remain at about half the level they were in 1990.

Climate Action Tracker ranks the target as “critically insufficient” to meet the Paris goal and consistent with a pathway towards 4C of warming by the end of the century.

With China, Japan and South Korea recently joining the club of nations aiming to cut their emissions to net zero by the middle of the century, Russia could be one of the last major developed economies to decarbonise, Ryan Wilson, a climate and energy policy analyst at Climate Analytics, told Climate Home News.

A draft long-term climate strategy published in March shows the government is considering reducing its emissions by up to 48% from 1990 levels by 2050 under an “intensive scenario”. This would allow Russia’s emissions to continue to rise for at least another nine years before reducing them just above 2017 levels — far from the 2050 net zero goal demanded by the UN.

Russia would achieve carbon neutrality “in the second half of the 21st century, closer to its end,” the draft said.

Under a baseline scenario proposed for adoption, emissions would fall by 36% compared to 1990 levels – equivalent to 26% above 2017 levels. Emissions cuts would be achieved by boosting energy efficiency and reducing forest clearance.

The country is not on track to meet its 2024 target of generating 4.5% of its energy from renewables, excluding hydropower – one of the lowest targets in the world, Wilson said.

Russia “has shown the least interest in taking the kind of action that most of the rest of the world has agreed to. It sits outside the spirit and intent of the Paris Agreement,” he added.

“There has been a lack of pressure [on Russia] as a result of their intransigence on this issue. The expectations are just so low. They are doing the bare minimum.”

While political pressure may be lacking, a move away from fossil fuels in the European Union, Russia’s biggest gas export market, poses an economic threat. Brussels is considering a carbon border tax on imports and no longer considers gas power to be a “sustainable” or “transition” investment.

“There is an existential threat to Russia’s gas industry regarding the European energy transition,” Sergey Kapitonov, gas analyst at the Skolkovo Energy Center in Moscow, told CHN. “Coal is not the only evil now. Natural gas [demand] has already started to decline in some places.”

In response, Russia is turning its attention east. With large Asian economies expected to turn away from coal to meet their net zero goals, Russia, the world’s top energy exporter, is banking on a surge in natural gas demand.

The vast majority of Russia’s gas reserves are located above the Arctic circle, a region that is warming twice as fast as the rest of the planet, with temperatures reaching a scorching 38C in June.

The government plans to grow its liquified natural gas (LNG) production in the Arctic ten-fold between 2018 and 2035, according to its 2035 Arctic strategy published last month, with the Yamal peninsula in northwest Siberia the focus of recent LNG developments.

The melting Arctic sea ice will  allow to ships to export LNG to Asian markets across the Northern sea route. By 2035, Russia hopes to increase the volume of maritime cargo transportation in the Arctic more than four-fold.

“In the mind of Russian policy makers, gas is still destined to play a huge role. They say that coal is the fuel of the past and natural gas is the fuel of tomorrow,” Kapitonov said.

“It’s a risky game… Russia has to play” to monetise its huge gas reserves, he added. “It’s the destiny of these resource-production nations.”

LNG exports to China are already on the rise and gas exports are expected to grow by 10% during the 2020-2021 heating season, according to Chinese state-owned oil and gas company Sinopec.

In anticipation of growing demand, Russian state-owned Gazprom has started a feasibility study for the construction of a second gas pipeline between eastern Siberia and China.

“If China opens its domestic market to Russian gas, it could become its biggest market,” said Vladimir Chuprov, head of Greenpeace Russia’s energy programme. But Russia faces competition from wind and solar power, as well as Australian and Qatari LNG, he added.

Investing in greenfield oil and gas Arctic projects is “economically suicidal,” said Chuprov. “It means Russia is still in the 20th century and doesn’t understand that it needs its own green deal.”

Indra Øverland, head of the Centre for Energy Research at the Norwegian Institute of International Affairs, told Climate Home “Russia’s dependence on oil and gas exports is leaving them vulnerable” to an international move away from fossil fuels.

“Russia still has its head in the sand,” he said, describing it as Russia’s “Kodak moment,” blind to the impact global climate policies will have on its economy.

In an interview with the Guardian earlier this month, energy minister Alexander Novak – since promoted to deputy prime minister – said Russia planned to become a global leader in producing “clean burning hydrogen”.

At present, most hydrogen is produced from fossil fuels in a process that emits carbon dioxide. Russia is working on technology to capture the CO2, Novak said, and can also produce hydrogen by hydrolysis using renewable energy.

Yuriy Melnikov, senior analyst on the power sector at the Skolkovo Energy Center in Moscow, was sceptical. He told Climate Home that in the absence of ambitious climate targets, Russian businesses had little incentive to invest in green hydrogen.

For Chuprov, of Greenpeace, Putin’s support for the oil and gas industry allows him to exert political control over the handful of oligarchs that runs it – and is therefore unlikely to change. “Phasing out oil and gas is phasing out that political system,” he said.