Shut off from microfinance and benefits, members of the Hindu minority in coastal Bangladesh have struggled to rebuild their lives after Cyclone Amphan 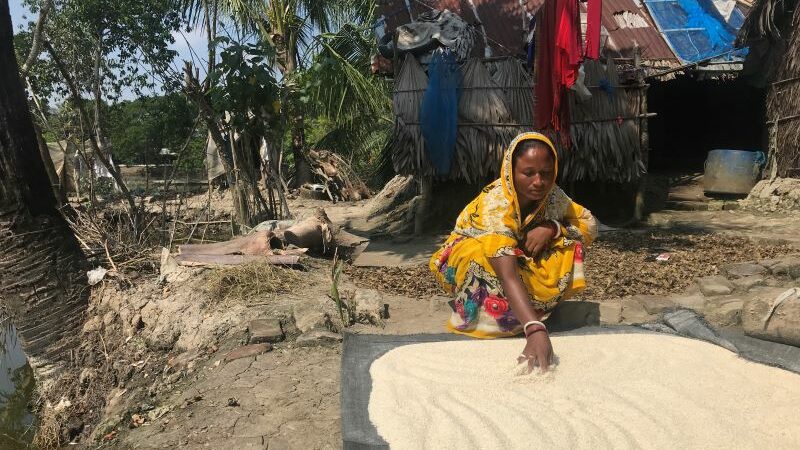 Varoti Munda dries rice in her yard, which has got wet in the previous night’s rainfall (Credit: Abu Siddique)

A small ethnic minority community in Bangladesh has been living beside the world’s largest mangrove forest, the Sundarbans, for two centuries.

Known until recently as “bunos” or jungle-clearers, the Munda people came to the country from Bihar state in India to help reclaim land for agriculture for zamindars (landowners) and dig lakes and ponds. They number around 5,000 in the coastal districts of Khulna and Satkhira.

In a region suffering from climate change impacts, the Munda are doubly disadvantaged by their minority status, lacking access to microfinance, benefits and employment opportunities available to others. An initiative to help them find alternative livelihoods has been shelved due to lack of funds.

Cyclone Amphan made landfall in western Bangladesh in May, triggering a tidal surge that overtopped the embankments and left fields flooded with saltwater for months. Over recent years, sea level rise and reduced river flow had made the soil increasingly salty, so rice could only be grown during monsoon season. After the storm, even that one annual crop became unviable across much of the region.

31-year-old Doyal Kumar Munda has fallen back on gathering resources from the forest, mainly crabs and fish.

“It is not enough for a balanced livelihood,” he told Climate Home. “Thirty years ago, my family had 20 acres of arable land. Now, we have only a homestead of 0.3 acres. Everything went as my parents sold land to meet the family’s needs.”

According to a 2015 study published by the Department of Environment, sea levels have been rising 6-20mm a year along the country’s coastline.

Between 1973 and 2009, 223,000 hectares of land has been affected by the intrusion of saline water, the Bangladesh Soil Resource Development Institute reports, a trend that continues today.

The impact can be seen in rice production data. There are three different growing seasons for rice in Bangladesh: Boro, Aman and Aush.

As the sea encroaches on farmland, many are turning to fish, shrimp and crab farming, or rearing goats. Others migrate in search of seasonal work. But the Munda face extra barriers to these adaptation strategies.

Mangrove revival: How tree-planting is financing women’s businesses in Kenya

Varoti Munda and her husband Robindro Munda tried to lease some land to cultivate shrimp a few years ago, but were refused a loan by local micro-credit organisations.

Like Doyal, they are dependent on the mangroves, venturing into the forest two or three times a week for resources they can sell to support their three children.

Seeking anonymity, a manager of a local micro-credit lender said the Munda people often had no assets to guarantee repayment of a loan. “Creating opportunities for the poor and developing their living standard are our objectives,” the manager said. “At the same time, we need to get back our money from the borrowers.”

Munda have no representation in local or national government bodies. They often lack awareness of social security entitlements and are not selected by local administrators to benefit from government-run work programmes such as road maintenance.

As a 75-year-old widow, Razu Bala Munda is eligible for a widow allowance of 500 taka ($6) a month and an old age allowance of 800 taka ($9), but receives neither. “When there is an emergency like a cyclone, we receive some relief,” she tells Climate Home. “But I have no idea about widow or old age allowance.”

Doyal Kumar said: “We only receive such benefits after the mainstream people, who are part of the vote banks of the authority.”

Nurul Islam, chairman of Uttar Bedkashi Union, the local authority, acknowledged the community sometimes missed out, “which should not be”, he said.

Moving to the cities for work is not easy either. Samaresh Munda, 25, found a job three years ago at a factory making plastic items in Dhaka. He says he is paid 2,000 taka ($24) less than others for the same work and was initially refused accommodation in shared houses. “I struggled to make people understand that I am not different.”

Local campaign group Initiative for Right View (IRV) launched a project a few years ago to boost the Munda’s prospects, but it has been put on hold because the funding from Swiss donor Heks/Eper ran out.

“We tried to provide some alternative livelihood options like goat rearing and training on how to make compost fertilizer from household waste,” said Marina Juthi, programme coordinator of  Initiative for Right View (IRV). “However, we have lost the funding.”