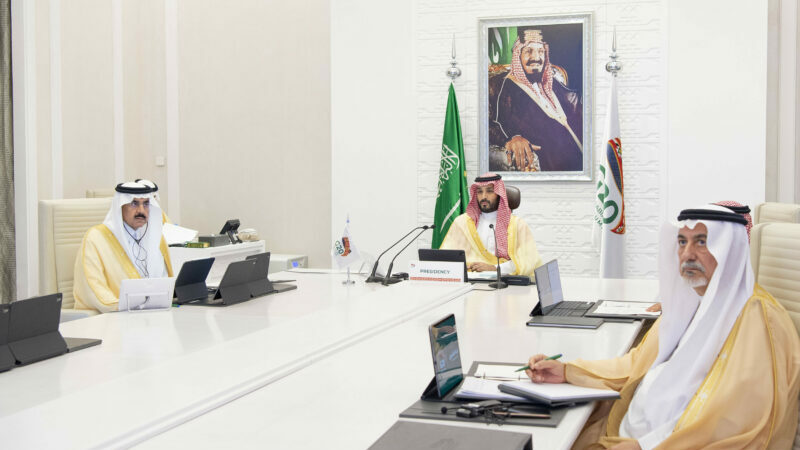 European leaders reached a compromise on climate change with the Saudi Arabian hosts at this weekend’s G20 summit.

The EU agreed to “endorse” Riyadh’s “circular carbon economy” concept in a joint statement, despite objecting that it shifts the emphasis away from cutting emissions to unproven carbon capture, reuse and storage models.

In return, it reinstated language dating back to 2009 on phasing out fossil fuel subsidies. The final text said: “We reaffirm our joint commitment on medium term rationalization and phasing-out of inefficient fossil fuel subsidies that encourage wasteful consumption, while providing targeted support for the poorest.”

Mention of fossil fuel subsidies had been opposed by Saudi Arabia and was left out of an earlier joint declaration of energy ministers.

G20 countries have collectively committed $235 billion to fossil fuels in coronavirus recovery measures, according to analysis from Energy Policy Tracker. That amounts to 55% of energy-related spending, compared to 35% on clean energy.

UN chief Antonio Guterres noted the disparity on Twitter, saying “fossil fuel subsidies should have no place in any rational Covid-19 recovery plan”.

As of September, the rescue packages of #G20 countries have committed 50% more funding to support fossil fuels than to low-carbon energy.

Fossil fuel subsidies should have no place in any rational #COVID19 recovery plan.

Canada sets out to enshrine 2050 net zero goal in law

Analysts said the display of unity at the Saudi-chaired summit set the groundwork for progress to be made when Donald Trump exits the White House and Italy hosts the G20 next year.

“Given the history of Saudi Arabia on the climate issue over the years and the nihilistic approach of Donald Trump towards multilateral diplomacy, expectations for this G20 summit were understandably quite low,” said independent consultant Alden Meyer, of Performance Partners. “The leaders statement didn’t signal any major steps forward on climate and energy issues, but despite Trump, it did reaffirm the need for collaborative action to confront the climate crisis.”

That “provides a solid basis for action by the incoming Italian G20 presidency, which will not have to deal with a dysfunctional and confrontational US president,” Meyer added.

Alex Scott, a senior policy adviser at E3G, said “While the outcomes of this G20 summit itself may not have been the most progressive on the climate front, there was a clear priority given to climate in many of the speeches. There’s been a mindset change around how leaders recognise the need to improve their climate policy particularly over the last few months since we’ve seen the net zero dominos starting to fall.”

The Saudi hosts promoted the circular carbon economy (CCE) approach at a side event, where it was praised by Japanese and Chinese leaders. Australia, India, the US and Italy (as the next G20 host) also attended.

Eddy Perez, international policy lead at Climate Action Network (CAN) Canada, told Climate Home: “The fact that [CCE] is in the text and the word ‘endorse’ has been used, tells you that the Saudis really fought hard to get that in there.”

In order to get the US to join the statement, it used language pioneered at last year’s Osaka summit which places responsibilities on all “signatories to the Paris Agreement”. This includes all the G20 nations except the US, which officially left the pact earlier this month. President-elect Biden has pledged to re-join the deal on his first day in office.

Perez said that Trump “did not disrupt” the summit as he has in previous years. The outgoing US president attended some of the meetings but was pictured playing golf during a pandemic preparedness event. In the circular carbon economy side event, he defended his environmental record, attacked the Paris Agreement and boasted that the US was the biggest oil and gas producer in the world.

Correction: The figures for the G20 countries’ fossil fuel bailouts were corrected on 24/11/20.