‘Looking for positivity’: Parisversaire party to revive momentum on climate

After a year disrupted by coronavirus, national leaders are expected to announce climate commitments on Saturday, the fifth anniversary of the Paris Agreement 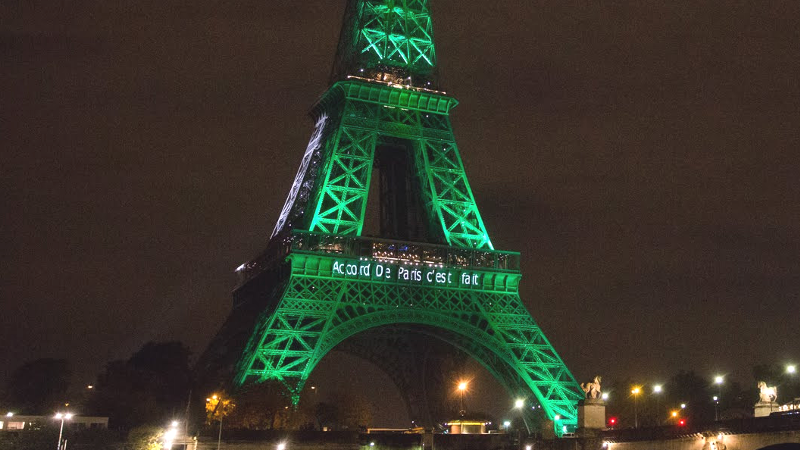 The Eiffel Tower in Paris, illuminated in green to celebrate the entry into force of the Paris Agreement, the most ambitious climate change agreement in history, on November 4, 2016 (Photo: Jean-Baptiste Gurliat/ Mairie de Paris)

At the end of year dominated by the coronavirus pandemic, world leaders are expected to revive momentum for climate action with fresh commitments to bring the goals of the Paris Agreement closer.

More than 70 heads of state, plus business and civil society leaders, will take the stage of a virtual climate summit on 12 December – five years after countries agreed in Paris to limit global heating “well below 2C” and strive for 1.5C by the end of the century.

The event is the first test of the Paris deal, under which countries agreed to ramp up their – collectively insufficient – contributions every five years to meet the temperature goals.

Since then, emissions have continued to rise and climate impacts have intensified. Many governments were already running late with their climate planning when the Covid crisis hit, diverting resources into healthcare, social security and business bailouts.

With no UN climate negotiations being held this year and the Cop26 climate talks in Glasgow, UK, postponed to November 2021, the UN, the UK and France, with support from Chile and Italy, are co-hosting the summit to galvanise political leadership.

“Many people are looking for positivity… and a look forward to 2021 as a year of change for the better,” Marcel Beukeboom, climate envoy for the Netherlands, told Climate Home News, in anticipation of the event.

“We need political momentum… that is what is much needed,” added Agripina Jenkins, a climate diplomat for Costa Rica.

While every national leader has been invited to submit a pre-recorded speech of up to two minutes, only those that can demonstrate increased ambition will be guaranteed a slot, with priority going to the most transformative announcements.

That could mean a strengthened 2030 target, a net zero commitment, post-2020 climate finance pledge or more robust programme to adapt to climate impacts. “There will be no space for general statements,” according to a logistical note seen by Climate Home.

Under the Paris Agreement, countries are expected to submit new or improved 2030 climate plans and publish long-term decarbonisation strategies before the end of the year.

As of Monday, only 16 countries representing 4.6% of global emissions had formally submitted a new or updated 2030 target to the UN, according to the World Resources Institute.

A number of countries are expected to come forward with enhanced climate ambition at the summit and edge the world closer to its climate goals. Formal submissions to the UN could follow in the next few weeks.

There has been movement from key players on long-term commitments in recent months.

China set its sights on carbon neutrality by 2060, while Japan and South Korea unveiled 2050 net zero goals. Joe Biden was elected as US president on a platform to decarbonise the world’s largest economy by 2050.

If those promises are followed through, global warming could be limited to 2.1C by the end of the century, according to analysis by Climate Action Tracker, putting the Paris goals within striking distance.

Sébastien Treyer, executive director of the French climate think-tank Iddri, described “cautious hope” at signs the deal signed in Paris was delivering greater emissions cuts “at the slow pace of change that characterises international relations but also with sudden accelerations like the one that we have seen in the last six months”.

This long-term ambition is yet to be reflected into the world’s largest emitters’ shorter-term targets, he noted, adding the political dynamic for enhancing ambition was “fragile” and much more work was need to make these pledges “an economic reality”.

While a host of announcements are expected throughout the five-hour summit, its success rests on what large emitters are ready to deliver.

The EU is on a tight schedule to agree on cutting emissions by at least 55% from 1990 to 2030, up from 40% currently, at a Council meeting starting two days before the summit. Thorny discussions on the union’s recovery package risk derailing the climate agenda.

Chinese sources have told Climate Home Beijing is on track to present its updated 2030 climate plan before the end of the year, but it is not clear whether president Xi Jinping will reveal further details at this forum or simply reiterate the net zero pledge.

Last week, the UK Cop26 host accepted the recommendation of its climate advisors and agreed to cut emissions 68% between 1990 and 2030.“We’re going to challenge world leaders not only to match our ambition but to set out exactly how they plan to do so,” prime minister Boris Johnson said in a video message ahead of the summit.

While Donald Trump is not expected to be part of the event, and Biden is not able to participate as president-elect, US sub-national players and incoming members of the new administration may make an appearance.

Among some climate campaigners, there is skepticism another leaders’ summit will deliver anything else than a string of promises and speeches.

Sriram Madhusoodanan, deputy campaigns director at Corporate Accountability told Climate Home: “We’ve seen a number of big fanfare summit since Paris with cycle of speeches by heads of states but not really anything meaningful come out in terms of the demands that civil society has been talking about to stay at 1.5C.”

Without the possibility for civil society to directly respond to leader’s announcements, the summit could be a space for greenwashing, he added.

While the event may draw attention to “hopeful signs,” “we are not transitioning at the pace required to meet our goal,”  Yamide Dagnet, director of climate negotiations at the World Resources Institute, told Climate Home. Countries havee yet to deliver coherent action that includes emissions cuts, adaptation and support for vulnerable nations, she said.

The Cop26 unit has asked donor countries to bring new finance pledges, but there are few signs of that materialising. The UK is cutting its own aid budget in the wake of the pandemic.

“This is where I am more worried and disappointed,” said Dagnet. “At a time when inequality and poverty are increasing… we are falling short on solidarity.”