In Kenya’s changing climate, women are claiming land rights to feed their families

Owning their own land allows Kenyan women to build resilience to drought and flooding, but many are unaware of laws intended to empower them 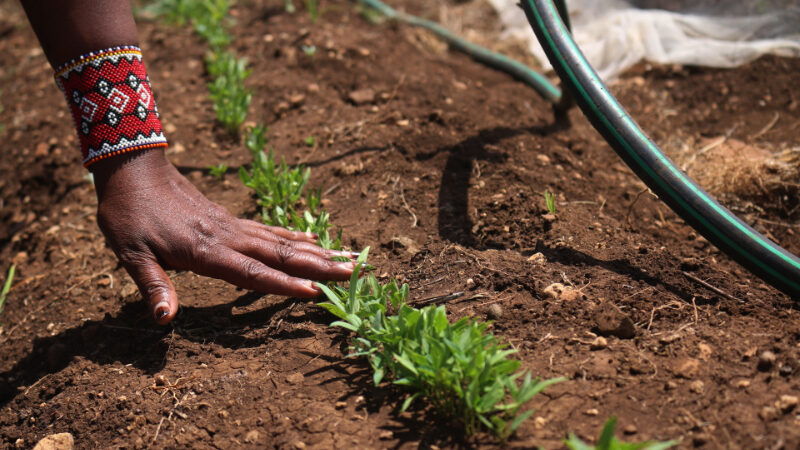 Less than 15% of women in sub-Saharan Africa have control over the land they farm (Pic: Sophie Mbugua)

With four children in tow and seven months pregnant, she returned to her father’s home, Namelok village in Kajiado, southern Kenya.

“I asked my father if I could get a portion of land to try farming and goat rearing. I needed financial means to feed, educate and care for my children,” Lasoi told Climate Home News.

Lasoi’s father gave her access to two acres of land despite her brother’s objections. She could cultivate it, plant vegetables, rear her goats but not plant trees or make any long-term decisions without consulting her father.

But after years of farming, banks would not give Lasoi a loan for her business as she had no assets. “I thought of buying land but school fees and my children’s needs didn’t permit. I asked my father for at least a small portion of his 300 acres of land, but he was sceptical.”

It was only when she attended a training session on land rights by the Nasaru women’s group, which advocates for women to be included in decision-making, in 2016 that Lasoi learned she was legally entitled to own and manage land.

“They told us that the constitutions and the laws in Kenya guaranteed women right to property. I did not know at that time” Lasoi says.

Equipped with this knowledge, she convinced her father that she needed to own the piece of land she had been farming for years.

About eight months ago, her father allocated her five acres of land as her inheritance, to which she now holds a title deed.

“My father empowered me. I never thought I could own land after my divorce. I can finally plant trees and shield my goats from the heat, secure a loan, and sell if need be,” says Lasoi. “It’s priceless to finally make decisions over land.”

Alice Lasoi, pictured at the back, convinced her father to allocate her five acres of his land and use it to grow her own crops and rear goats to sell (All photos by Sophie Mbugua)

Owning land is key to helping women cope with the impacts of climate change, such as drought, and enables them to feed their families.

In Kenya, Article 40 of the constitution guarantees a right to property for all. The Land Act, revised in 2016, requires spousal consent to sell land. The 2013 matrimonial property act allows women to register alongside their husbands for property acquired during marriage. The 2016 Community Land Act states that boys and girls above 18 years have a right to vote on community land decisions.

Regionally, the Africa Union, in its 2009 land declaration, recommends that its member states allocate at least 30% of land to women. Article 7 of the Maputo Protocol, the African Charter on human rights, grants both women and men rights to an equal share of joint property acquired during  marriage in the case of separation, divorce, or annulment.

“We have very beautiful pieces of legislation protecting women’s right to land in Kenya and in Africa but there is a big gap between policy and practice in many sub-Saharan countries. Since the colonial times, women have been excluded from land control and ownership. Our problem is enforcement,” Faith Alubbe, the chief executive officer at the Kenya Land Alliance, told Climate Home News.

It is difficult to enforce land ownership policies as rural women and community influencers are rarely included in drafting them, according to Evelyne Batamuliza, executive member of the African Development Bank Group’s Adaptation Benefits Mechanism.

“We move so fast in terms of making these laws but sometimes the people who these laws are made for do not know they exist as they never got a chance to participate,” Batamuliza tells Climate Home News, adding that land rights remains “a conversation among the elite in cities”.

During the colonial era, the eldest male was registered as the family land administrator and no consideration was given to women. The male determined the rights of the women living in that homestead. In many African countries, the land laws are still colonially inclined.

“This generational exclusion of women on land has further affected their inclusion in community decisions to cope with droughts and floods [which are] becoming extreme and more frequent,” Juliana Rono, director of Nasaru Women’s Group, told Climate Home.

Since 2016, Rono has been working to build the resilience of about 150 women in dry areas of Kenya’s Kajiado county, with a climate adaptation grant, totalling 52 million Kenyan shillings ($466). The project was initially expected to run for three years, but has been extended for five years until June 2021.

Rono says in her community, it was difficult for women to create alternative livelihoods as they do not own land.

“With the droughts and floods becoming frequent and severely disrupting pastoralism, it’s becoming critical to have an alternative livelihood to shield families from increasing poverty and malnutrition,” she says.

Pastor Stephen Saruni, a religious leader in Nameko, says frequent drought has driven men to sell their land. “Unfortunately, they sell without the wife’s knowledge, they relocate to towns, marry another woman leaving the wife and children in extreme poverty,” Saruni told Climate Home News.

According to the World Health Organization women and children are 14 times more likely to die when a natural disaster happens than men.

Social norms demand women stay home to care for families while men leave for towns in search of jobs. Women and girls in poor countries spend 40 billion hours annually collecting water, according to the United Nations Department of Economic and Social Affairs (UNDESA).

According to Care International, women and girls make up 43% of the agricultural workforce in the global south. Women and girls from Eastern, Central, and Southern Africa, produce nearly 70% of the region’s food crops by volume.

But despite this, less than 15% of women in sub-Saharan Africa have control over the land they farm, according to Batamuliza. A lack of land rights restricts women from making decisions about planting drought-resistant crops like sorghum or investing in alternative livelihoods like goat rearing, she says.

In Kenya, the Federation of Women Lawyers (FIDA) says women head about 32% of households, but individually hold only 1% of land titles. In 2018, an analysis by the Kenya Land Alliance found that out of the one million title deeds issued by the Kenyan government between 2013-2017, only 103,043 were given to women.

Mother-of-five Lorna Nashipei is working hard to overcome these societal barriers. Two years ago, the 38-year-old mother was surprised to meet a pastoralist woman growing and selling vegetables from her kitchen garden.

“I was spending too much time travelling to the nearby town to purchase vegetables weekly. I spent 500 Kenyan Shillings ($4.50) on vegetables and transport. Yet I had five acres of land all left for cows and goats to roam around,” Nashipei told Climate Home News.

Lorna Nashipei started with a small kitchen garden, now she farms two acres of land in her village in southern Kenya

Nashipei convinced her husband to allow her to start a kitchen garden. Over time, the number of times she asked for vegetable money reduced, but the frequency Nashipei served the family vegetables increased.

When her husband questioned how Nashipei was managing to serve vegetables regularly, without asking for money, she saw an opportunity to request a more significant portion of land.

Today, Nashipei farms nearly two acres of maize, beans, sweet potatoes, peas, assorted traditional vegetables, and grass for her cows. Her husband is helping her fence the land to protect the crops from livestock destruction.

She earns around 30,000 Kenyan Shillings ($269) selling farm produce during a good harvest. She has invested some of this money in a community savings programme, known as table banking, where members pool their savings and lend to each other.

Nashipei makes an individual contribution of 3,000 Kenyan Shillings ($27) each month and has used the table banking system to buy goats, food and help pay for school fees.

Nashipei is not the only woman succeeding in making land decisions in Kenya. Since the 2016 community land bill passed, Alubbe says two pastoralist communities in Laikipia county have successfully registered their land.

In these communities, eight women have been included in land governance structures. They are registered as part of the groups harvesting sand, sold in nearby towns for construction, and as part of the committees that allocate grazing areas, something that has not happened before.

“It is a good precedent,” says Alubbe. “The hope is that as more communities register themselves and their lands, women’s land rights will expand from access and use to control and ownership and that communities will learn from these two pastoralists groups where women make decisions on how land is used.”

Nashipei’s initially sceptical husband has allowed her to access and manage two acres of land. Although the land title is still in her husband’s name, Nashipei is in the process of having her name included on the family title deed.

“Since he has seen the farm generate income and reduce financial burden on him, he has allowed me to grow crops without his permission. We have saved around 8,000-10,000 Kenyan shillings ($70-100) each month,” she says.

Rono hopes to see more women fight for their rights to owning and controlling land and make better decisions on how to adapt to the changing weather. But the gulf between statutory and customary laws makes this complicated, says Batamuliza.

“Statutory law recognises that women can control and own land, but on the ground, the customary laws controlling land allocations are already institutionalised culturally and socially. The customary law is more prevalent than the statutory law advocating for equality of land inheritance,” Batamuliza says.

“Unless there is advocacy in behaviour and an attitude change among the traditional decision makers and influencers in African communities, the two worlds cannot exist coherently. We will not see a lot of change just from adopting all these declarations, laws and policies.”