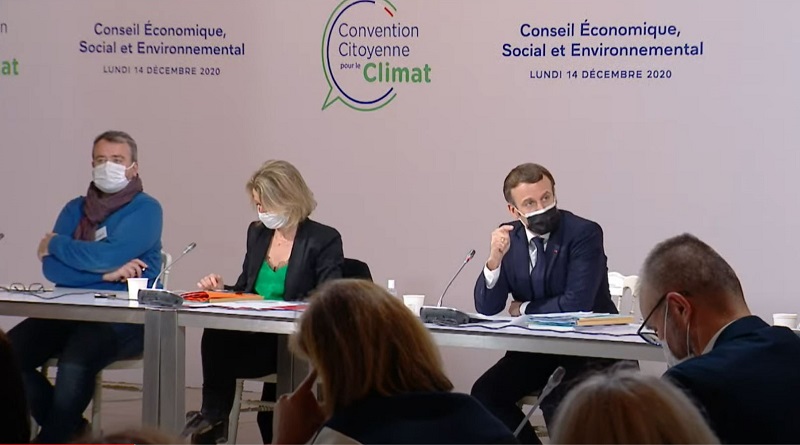 Participants in a citizens’ assembly on climate change have accused the French government of backsliding on its promise to legislate on key recommendations.

The government has unveiled the draft of a long-anticipated climate law to accelerate France’s energy transition. It creates the legal framework to translate just under half the climate assembly’s proposals into law.

The remaining measures could be still be acted upon separately, with many requiring implementation at the EU level.

French president Emmanuel Macron committed in June last year to submit 146 of the assembly’s 149 propositions to the French parliament or to a referendum “without filter” – comments he has since rowed back from.

“I’m not going to say that because these 150 citizens have written something that it’s the Bible,” he told French media Brut in an interview in December.

The government said the climate law would usher “an unprecedented transformation in the history of France” towards “a carbon neutral society that is more resilient, just and fair”.

It added the bill was a response to “the promise of a renewed social pact between citizens and those governing them” in the form of an environmental and climate transition.

The assembly of 150 citizens chosen at random was launched following “yellow vest” protests that were sparked by a 2018 hike in fuel tax. It was tasked to come up with measures to reduce the country’s emissions at least 40% by 2030 from 1990 levels “in a spirit of social justice”.

But climate campaigners have accused the government of watering down and throwing out a number of the assembly’s propositions and failing to propose a bill that will allow France to meet its climate goals.

Last month, France as part of the European Union agreed to deepen emissions cuts to 55% between 1990 and 2030 – a target campaigners say France will not be able to meet with the bill in its existing form.

Grégoire Fraty, one of the citizens to have taken part in the assembly and a founding member of ‘Les 150’ – a pressure group to ensure its propositions are followed through – told Climate Home News he had “mixed feelings” about the text.

“There are some very good things and it’s going in the right direction but there isn’t enough ambition,” he said, adding that a number of measures had been “truncated” and the law was incomplete.

“It’s a shame,” he said. “With this truncated climate law, we are not guaranteed to meet the climate objectives for 2030.”

Under the law, the government proposed to make it illegal for landlords to rent energy inefficient homes from 2028 but stopped short of requiring an efficiency makeover for all homes and buildings by 2040, as the assembly recommended.

Measures to curb emissions from aviation were also weakened.

The government agreed to phase out domestic flights on routes where rail alternatives under two and a half hours are available; less than the assembly’s proposed 4-hour threshold.

An eco-tax on aviation to reflect the sector’s environmental impact and incentivise low-carbon alternatives will only be increased if air travel rebounds to pre-pandemic levels in 2019 and the issue is not addressed at the European level.

And a ban on the construction and expansion of new airports has several caveats and comes as Marseille airport gets the green light for a large expansion project. Last year, the environment authority had asked the project developers to demonstrate how the expansion was compatible with France’s 2050 carbon neutrality goal.

Meanwhile, the inclusion in the law of ecocide as a punishable offense – one of the assembly’s flagship recommendations – has quickly become one of the most contested measures amid Macron’s own ranks and the business lobby.

Campaigners said the law did not put enough pressure on business, focusing instead on self-regulation, voluntary action and information for consumers.

In a statement, Friends of the Earth accused the government of “sabotage” of the assembly’s work. Climate Action Network France (Can France) denounced a “blatant lack of ambition”.

Anne Bringault, an energy transition campaigner with Can France, wrote in Alternatives Economiques the law was “a declaration of intent” but included few measures to implement immediately – leaving the heavy lifting to beyond the next election cycle in 2022.

France’s national council for the energy transition, which advises the environmental ministry, is due to publish its assessment of the draft law at the end of the month.

The text will be presented to the cabinet on 10 February and is expected to be discussed by French lawmakers from the end of March. The citizens’ assembly is due to meet in March to review the bill.