In a highly critical report, officials found the National Energy Administration was promoting coal power expansion without regard for Beijing’s environmental goals 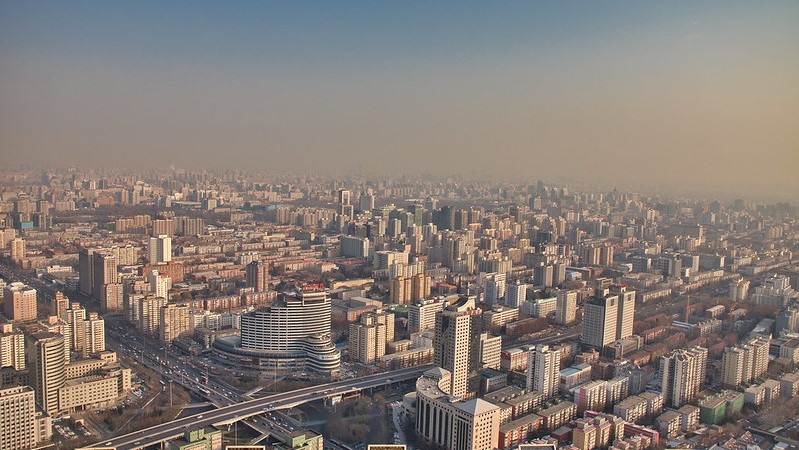 View of Beijing from the central TV and radio tower. (Photo: Eric Jiang/Flickr)

The unusually critical inspection report into the National Energy Administration (NEA) has been interpreted by analysts as a warning to civil servants that president Xi Jinping’s climate ambition is to be reflected across all energy planning decisions.

The Central Environmental Inspection Team (CEIT) report accused “some comrades of the NEA” of failing to attach enough importance to environmental protection and the promotion of low-carbon energy, which it described as a “deviation in ideological understanding”.

The report criticised the building of coal power plants in populous regions with bad air pollution, accused the NEA of failing to stop coal mines producing more than they were supposed to and denounced poor policy coordination regarding renewable energy consumption.

Although staffed by officials from the relatively weak environment ministry, the CEIT reports to Han Zheng, a powerful member of the Politburo and President Xi’s right-hand man on environmental issues.

This is as big as it gets in China’s energy policy: An environmental inspection authorized by the Party Central Committee has been carried out at the National Energy Agency, and the final report is BRUTAL in calling out failure to rein in coal.https://t.co/VVXhsDFqBt

Dimitri De Boer, who heads ClientEarth’s China office, said: “This is a highly encouraging development – environmental disciplinary inspections are a very powerful tool, so it’s great that they are being deployed to accelerate the climate transition.”

Inspectors have demanded the NEA draw up a “rectification plan”. The document is due to be submitted to the State Council within 30 working days and will be made public.

This could include a clampdown on some of the newly approved coal plants, analysts told Climate Home but Zhang, of EDF, suggested it could go further.

“I think we would expect a major overhaul of [the current] fossil fuel based energy development plan to happen” to be “consistent” with Beijing’s global climate goals, he said.

He added negative inspection reports damaged the chances of promotion for the officials in charge. This will be particularly on NEA officials’ minds ahead of next year’s Chinese Communist Party congress, which will appoint a new generation of leaders, he said.

According to Refinitiv energy analyst Yan Qin, the report has “triggered huge debate in China and will put some pressure on both central and local energy regulators in accommodating climate goals in their decision making”.

China’s coal production in 2020 reached its highest level since 2015, as officials in coal-rich provinces turned to traditional industries to revive the economy after Covid-19.

US plans to end fossil fuel finance overseas, threatens billions in support for oil and gas

Since President Xi’s announcement last September that China will aim for carbon neutrality by 2060, a handful of major Chinese companies and provinces have begun to draw up plans to peak emissions and reach net zero. These companies include China’s largest steelmaker Baowu Steel and oil, gas and chemical company Sinopec.

De Boer said these pledges are “a big deal” and “will certainly trigger a lot of learning and reflection among the leadership in these state-owned companies, about climate change and viable business models in a zero-carbon world”.

Thomas Hale, associate professor at the Blavatanik school of government, said Chinese businesses were trying to “get on the right side of government policy” but their announcements were “pretty superficial” and “sometimes baffling”.

“I haven’t really seen much that suggests many of these companies are fully cognizant of the vast transformations ahead of them,” he said. “Net zero is already the norm, but now the real debates are on credibility. Chinese companies have not been part of these debates, but will likely need to grapple with them soon.”

The steel-making Angang Group says it is building “garden style” iron mines and PetroChina is planning to spend 3-5bn yuan ($460m) a year on sectors such as solar and hydrogen, as well as methane gas.

Following President Xi’s commitment that China will peak its emissions before 2030, Beijing has yet to submit an improved climate plan to the UN.

Greenpeace’s Li said he expects “potential interplay” between China and other major emitters, including the US, which is also due to present an updated and more ambitious climate plan. The US has promised to submit its plan by the time it hosts world leaders for a climate summit on April 22.

Since Joe Biden’s inauguration, US and Chinese officials have clashed on whether the world’s two largest polluters can co-operate on climate change in isolation from more contentious issues such as trade, human rights and the militarisation of South China Sea.

“China is ready to cooperate with the United States and the international community on climate change,” he told a press briefing. “That said, China-US cooperation in specific areas, unlike flowers that can bloom in a greenhouse despite winter chill, is closely linked with bilateral relations as a whole”.

Li, of Greenpeace, warned: “No one should underestimate the challenges in US-China climate engagement.”