Environment minister Claude Nyamugabo is accused of violating a moratorium on logging in the Congo rainforest, by awarding concessions the size of Wales 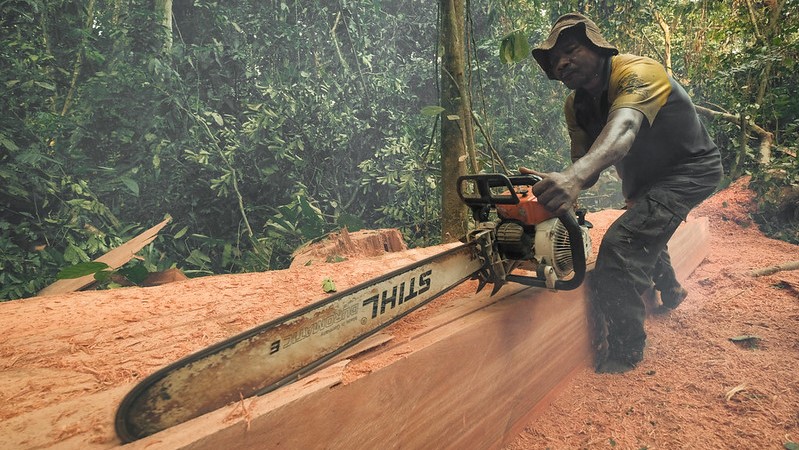 A Sapelli tree being cut near Imbolo, in the Democratic Republic of Congo (Photo: Axel Fassio/CIFOR/Flickr)

Campaigners in the Democratic Republic of Congo are taking the country’s environmental minister to court over accusations he illegally allocated nearly three million hectares of logging concessions to two Chinese firms and a Congolese cleaning company.

The consortium of civil society groups is accusing environment minister Claude Nyamugabo of violating a 2002 moratorium on new logging concessions on two separate occasions in 2020 covering an area bigger than Wales.

The Congo rainforest is the world’s second largest rainforest. In recent years it has seen increased and sustained forest cover loss, which threatens its role in sucking carbon out of the atmosphere.

Campaigners say the contracts, which were recently obtained by civil society and seen by Climate Home, are illegal and risk opening up larger areas to commercial logging.

“Any expansion of industrial logging at this time spells bad news,” he said. “Despite tens of millions of dollars in subsidies over recent decades, the logging industry in DRC and much of the wider region remains synonymous with political patronage, corruption, few trickle down benefits, social conflict and poor environmental practice.”

After several attempts to discuss the issue with the minister, campaigners filed a lawsuit in the country’s administrative court – the first time a sitting minister is facing a legal challenge over breaching the country’s forest laws.

“We had to dare. We could not let this slip otherwise things will never change,” Augustin Mpoyi, an environment lawyer at Kinshasa-based NGO Codelt, which works to strengthen the transparency and accountability of environmental regulations, told Climate Home.

The environment ministry has insisted Nyamugabo did not act illegally and the contracts referred to transfers of existing titles rather than the opening of new concessions. A spokesperson for the ministry declined to respond to Climate Home News’ questions.

But campaigners say this violates the moratorium which was reaffirmed by presidential decree in 2005 and states that the ban on new allocations applies to “every acquisition of exploitation rights” including the reallocation of existing concessions.

Logging in the Democratic Republic of Congo (Photo: Axel Fassio/CIFOR/Flickr)

This is not the first time a DRC minister is accused of violating the country’s ban on new logging concessions. In 2018, environment minister Amy Ambatobe reinstated three concessions to Chinese companies.

The move was decried by global NGOs and prompted the Central African Forest Initiative (Cafi) a UN-backed forest protection scheme, to freeze payments to DRC projects on the basis it breached an agreement with the government to preserve the forest in return for international aid money.

Cafi has started to negotiate a second phase of its programme in DRC to 2030. The government is hoping the deal could win them up to $1bn in funding.

Cafi lead official Berta Pesti told Climate Home it had yet to adopt a position on whether the concessions were illegally allocated.

It describes itself as “a national leader” in cleaning commercial and industrial spaces. According to its website, it also specialises in banking services, logistics and agriculture and forestry development, including the running of fruit trees and sustainable African palm oil nurseries.

Groupe Services has denied any wrongdoing and called on Greenpeace Africa to replace its international project manager for its forest campaign Irène Wabiwa Betoko.

Betoko has repeatedly called for the environment ministry to be more transparent in its activity, describing the forest as “a battleground for the future of governance in this country”.

The concessions include areas of forest with carbon-rich peat soils, which could become a major source of greenhouse gas emissions if disturbed. And, Betoko said, communities living in the area were not consulted about the plans, yet logging on the ground has already begun.

Three of the four concessions allocated to Groupe Services are located in the Mai Ndombe province, an area covered by a $55m emissions reductions programme being finalised between the DRC government and the World Bank.

Private concession holders in the province stand to be the major beneficiaries of the programme, said Eisen, of the Rainforest Foundation. Under current proposals, private companies will receive a share of the programme’s payment in return for reducing forest clearance.

Recent analysis by the Rainforest Foundation and its Congolese partner Apem found the Mai Ndombe programme, one of the world’s highest profile Redd+ programmes, was failing to deliver social safeguards or prevent deforestation.

Pressure is mounting on Cafi to intervene. In a 2016 agreement, Cafi committed to spend $200 million in international aid by 2020 to protect the DRC forest.

Betoko described the Cafi partnership as a “failure” and warned against the funds being “misused” by government. Greenpeace formally called on Cafi to suspend all payments until minister Nyamugabo cancels the latest contracts.

A Cafi spokesperson said forest governance was “of prime importance” to the initiative and that it was working to implement a specific programme in the DRC to strengthen it.

“In general, we are very grateful for the advocacy and monitoring undertaken by national civil society in the DRC. It is indeed through joint efforts, partnerships and constant dialogue that we believe the needed changes can happen, including on forest governance at all levels,” she added.

Lionel Diss, DRC special advisor at the Rainforest Foundation Norway, told Climate Home that Cafi was a holistic and intersectoral initiative which “has the potential to make a positive difference in the preservation of DRC’s rainforest”.

“The forthcoming renewal of the partnership for a 10-year period could be a key opportunity for the DRC to raise their climate and biodiversity ambitions,” he said.