More than six months after the Wakashio spilled fuel oil into a pristine lagoon, Mauritians are still waiting for answers and compensation 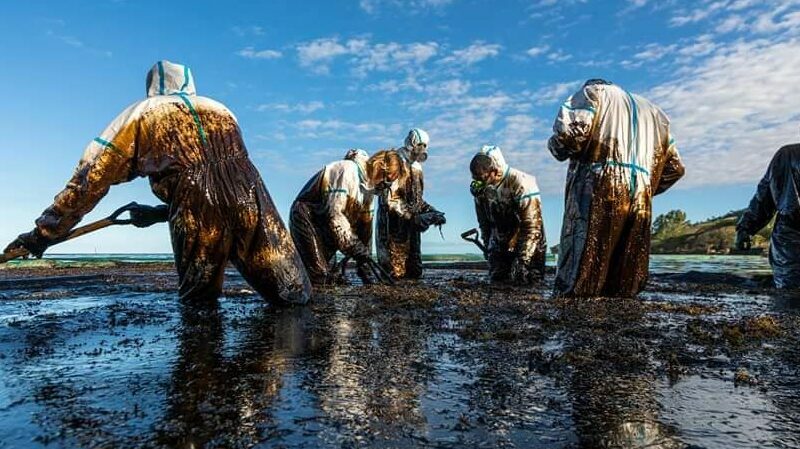 Over six months ago, Japanese cargo ship MV Wakashio ran aground on a coral reef off the coast of Mauritius, leaking up to 1,000 tonnes of heavy oil into a pristine lagoon.

The oil spill has been described as one of the worst ecological disasters ever to hit the western Indian Ocean. It has devastated the livelihoods of local fishermen and tour operators, who were already struggling to stay afloat due to the coronavirus pandemic, campaigners on the ground say.

Shipping and ocean experts told Climate Home News that the incident has raised serious concerns about the safety of the fuel used on board the Wakashio and its long-term environmental impacts. More vessels could fail and cause marine pollution if the lessons of the disaster are not learned, they warned.

An envoy from the International Maritime Organization (IMO) downplayed the environmental threat, saying the leaked fuel was “just like skin cream”.

“It begs the question whether the shipping industry is really holding itself to greater accountability on the product that it uses,” Yuvan Beejadhur, a former blue economy expert at the World Bank and coordinator of citizen movements in Mauritius, told Climate Home News.

In January 2020, the IMO – the UN body responsible for international shipping – introduced a sulphur cap, banning ships from using marine fuels with a sulphur content above 0.5%.

VLSFOs are cheap, blended fuels made from residue oil, the dregs at the bottom of the barrel, and more refined products, such as gasoline or diesel.

When VLSFOs started being used in January 2020, very little was known about them, according to Dr Sian Prior, lead advisor to the Clean Arctic Alliance. “Nothing on levels of air pollution when they were burned, nothing on how they reacted if spilled and nothing on the environmental impact,” she told Climate Home News.

In 2020 several studies were published which indicate that VLSFOs are far from green. Although they emit significantly less sulphur when burned than other marine fuels, they cause higher black carbon emissions because they contain a large number of aromatic compounds, according to a study by the German Environment Agency, seen by Climate Home.

Besides the emissions they produce, there are also concerns about how VLSFOs react with water.

A local volunteer assists with the clean-up of the Wakashio oil spill in Mauritius in August 2020 (Photo: Fawzee Mohamad Barkhut)

Two weeks after the Wakashio grounding, the IMO sent representative Matthew Sommerville to provide technical advice and assist with the clean up. In comments to reporters in Mauritius, Sommerville described the spilled VLSFO as “not really black thick oil… It’s just like skin cream.”

“It goes away. It’s not the end of the world – it cleans. Look how easily it is cleaning off. It could have been a lot worse if it had been a different type of oil,” he said.

When asked by Climate Home News if the IMO backed this characterisation of VLSFO, spokesperson Nathasha Brown said: “We will wait for the full report to see [if there are] any lessons to be learned.”

Experts disagree with Sommerville’s assessment and say that VLSFO has similar characteristics to traditional heavy fuel oil (HFO), a viscous oil which solidifies quickly in water, making it incredibly difficult to clean up.

A 2020 study by Norwegian marine research institution SINTEF found that VLSFO has a similar composition to HFO when spilled in water. “The oils tested indicate a high degree of persistence on the sea surface,” the SINTEF researchers said, adding that “the oil spill response can be even more challenging” than in the case of traditional fuel oil, such as HFO, particularly in cold water.

A report seen by Climate Home by the International Standards Organization, which will be discussed at an IMO meeting in March, also classes VLSFO as an HFO based on its density.

“It can be concluded that the vast majority of VLSFOs would fall under the definition of HFO in the HFO ban approved by MEPC 75,” the report noted, citing the decision by the IMO’s environmental committee in November to restrict HFO use in Arctic waters.

In late August, a month after the Wakashio ran aground, dead dolphins started washing up on Mauritius’ shores. A spokesperson for the fisheries ministry attributed the deaths to shark attacks, telling Reuters that the dolphins had wounds and blood around their jaws, “no trace of oil however.” Environmental groups called on the government to conduct an autopsy. To date the results of the autopsy remain unknown.

“The dolphins, whales and porpoises that died – it’s still not been explained whether it was caused by sulphur fuel. No results have been communicated,” said Beejadhur.

Beejadhur said many of the long-term environmental impacts of VLSFO have not been thoroughly assessed, despite the fact that the fuel is now widely used within the industry.

The Wakashio wrecked off the coast of Mauritius (Photo: Fawzee Mohamad Barkhut)

According to the Wakashio’s owner, Nagashiki, the ship ran aground because the crew was sailing too close to the shore and was not aware of safety procedures.

“There was a lack of awareness of the dangers of navigating close to the coast… and insufficient implementation of regulations that must be observed in order to safely execute voyages,” the company said in a statement.

But experts say that VLSFO has been linked to engine wear and could have caused the engine of the Wakashio to fail. No assessment of the condition of the engine has been made public.

Sulphur has some lubricating qualities and if it is removed from the fuel, engines can get stuck, Branko Berlan, the representative for the International Transport Federation at the IMO, told Climate Home News.

If operators don’t use other acidic lubricants, similar to sulphur, abrasive calcium deposits can build up inside the engine cylinders which could ultimately lead to engine wear or failure, according to a report by fuel testing company Veritas Petroleum Services (VPS), seen by Climate Home. VPS said in May it had identified over 40 ships that had experienced major engine damage since they started using VLSFO in January 2020.

Part of the problem is that operators do not know what type of fuel they are handling and how to ensure it is safe to use on board their ships, according to Berlan. “Exact procedures and involved substances are unknown. You never know what you are receiving as there is no regulation around quality,” he said.

“Any petroleum-based fuel oil has potential safety risks. Ship engineers and ship masters need to be aware of potential safety issues with the fuel they use and have to manage any risks,” said the IMO’s Brown, adding that safety guidance was issued before ships started using VLSFO.

One of the biggest omissions from the investigation into the Wakashio grounding is that fuel from onboard the ship was never tested by independent analysts.

In September, Mauritius’ ministry of environment said it had asked the Australian Maritime Safety Agency (AMSA) to carry out an independent analysis of a fuel sample from the Wakashio.

AMSA told Forbes in January that it never received a fuel sample from BP, the oil company that supplied the fuel used by the Wakashio.

BP said it has analysed the fuel but has not publicly disclosed the chemical composition.

The fuel on board the Wakashio “fully met the specified standard that is recognised across the international bunkering industry,” BP said in a statement. BP said that the fuel was also tested by Mitsui OSK Lines (MOL), a subsidiary of Nagashiki Shipping and the company that chartered the Wakashio.

“MOL raised no concerns about the quality of the oil, nor have the operators of seven other vessels that received the same fuel,” BP said. A spokesperson did not respond to follow-up questions about why BP did not supply a sample to AMSA as requested.

But experts say much remains unknown about VLSFO and it is critical samples from the Wakashio are analysed to avoid future disasters and help Mauritius recover from this oil spill.

“It’s paramount to know the oil’s chemical composition so you can tailor the best and most successful response. You don’t have an idea of the compounds in there. [They] dictate how toxic [the spill] may be,” according to Chris Reddy, a senior scientist at the Woods Hole Oceanographic Institution, who has analysed major oil spills, including the Deepwater Horizon disaster in 2010.

“Knowledge about this spill could help us inform how things may play out in Mauritius,” Reddy told Climate Home News. He and his team analysed a sample of floating fuel residue, collected on 16 August.

“We don’t know if this was a low-sulphur material, but it’s unlike anything we’ve seen spilled before—that alone demands a closer look,” Reddy said after analysing the sample in October.

“We didn’t get the original product from the ship. A sample was collected from the beach and was a week or two old. Based on experience, it changed a little [compared to] the spilled fuel oil.” Reddy told Climate Home News.

“Today, uncertainty about Mauritius recovery persists, while no major action has been taken to protect the island’s waters from a future incident,” climate campaigners wrote in an Al Jazeera article this month.

“No results have been communicated,” said Beejadhur, adding that the IMO and government investigators have had little engagement with local fishermen, whose livelihoods have been destroyed by the oil spill.

Campaigners are critical of the meagre compensation offered to affected communities. The government set up a “Wakashio solidarity grant” for around 3,000 people, offering them a one-time pay out of Rs 20,000 ($500), according to activist group Rezistans ek Alternativ.

According to maritime law, the ship owner is responsible for damage caused by an oil spill. That means Nagashiki Shipping is liable. Nagashiki said in July that it would “deal with compensation claims based on applicable laws”.

Due to a technicality, that compensation could be capped at $18 million, regardless of the scale of the damage.

To date no payout has been made and it remains unclear how far the compensation negotiations have progressed. Mauritius’ ministry of the blue economy, marine resources, fisheries and shipping did not respond to Climate Home’s questions regarding the insurance claim.

Mauritians worry that they will be left to deal with the recovery from the devastating oil spill themselves.

“The saddest fact is if we go back to normal and people forget about the Wakashio crisis,” said Beejadhur.