Stuck in the middle: Ukraine aims for net zero but struggles to access finance 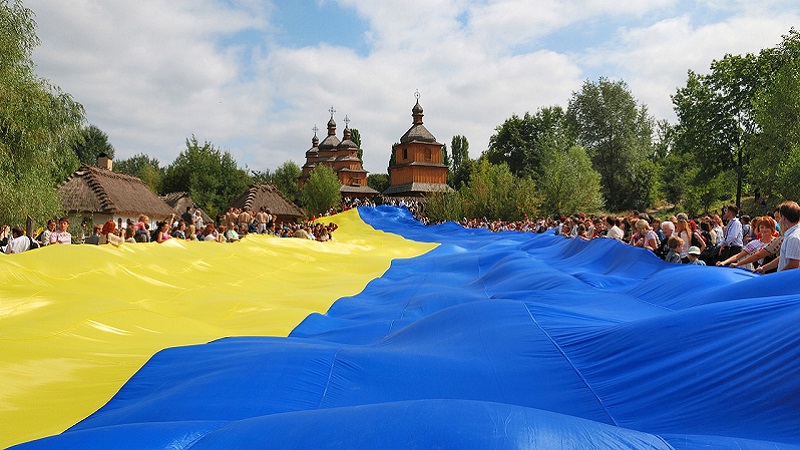 Ukraine is aiming to get to net zero emissions by 2060, under a government strategy published earlier this month.

Officials tell Climate Home News they would like to go faster, but do not know where the money will come from.

While its GDP per capita is significantly lower than the global average, Ukraine is classed as a developed country in the UN climate process, making it ineligible for support from the Green Climate Fund. Nor does it benefit from EU membership like many of its neighbours.

Irina Stavchuk, deputy minister of energy and environmental protection, told Climate Home News investments would have to triple in the 2040s to get near to climate neutrality by 2050. That is based on modelling by the London-based European Bank for Reconstruction and Development and Ukraine’s Institute for Economics and Forecasting.

“Having these economic calculations, it’s very difficult for the government just to make promise without understanding how the investments would actually come and be delivered,” she said.

Anna Ackermann, a campaigner from Kiev-based Eco Action, said 2050 was possible, at least in the energy sector. An Eco Action study with the Institute of Economic Forecasting in Ukraine showed a transition to 91% renewable energy by 2050 was “economically feasible” with existing technology.

SPONSOR OUR COP26 COVERAGE: Contact our team for further information

He said Ukraine was trying to reach net zero as fast as possible but was in a “different league” to the EU when it comes to climate finance. “We are Shakhtar Donetsk in the Ukrainian Premier League and they are Real Madrid,” he said.

At UN climate talks, Ukraine has lobbied for access to GCF finance – so far without success.

Riabchyn said the country was “stuck in the middle” and “cut off from the finance when we are in a very hard situation when we have a war, economic recession and modernising our economy trying to do a very painful reform”.

After Ukraine’s pro-EU 2014 revolution, Russia invaded parts of the east of Ukraine. Their forces continue to occupy these areas and the conflict, which has killed over 10,000 people and displaced over 1.5 million, continues.

Ukraine’s GDP per capita is the lowest in Europe and less than countries like Cuba, Bahrain and Botswana that have received GCF funding.

As it is not a member of the EU, Ukraine is not eligible for initiatives like the €17.5bn Just Transition Fund, which is helping coal-reliant countries like Poland to move away from fossil fuels fairly.

“It’s very easy to decide to close a mine. But it’s a very sophisticated policy what you do with the coal-mining region – how you retrain the workers, there needs to be a just transition,” said Riabchyn, “and what resources are available for this?”

Ukraine can get support from the Global Environment Facility, which has funded several climate change programmes. And the EU offers some support under its neighbourhood policy.

Another potential source of revenue is Ukraine’s carbon tax, although at less than a dollar a tonne, it is the lowest carbon price in the world. It currently goes into the general budget but could be earmarked for a climate fund co-financed by international donors, Stavchuk suggested.

Stavchuk said one priority of the Ukrainian Green Deal would be to invest in energy efficiency. The country is one of the least energy efficient in the world.

Most Ukrainians have their heating bills subsidised so energy efficiency would save the government and residents money, Stavchuk said.

For electricity, Ukraine relies mostly on nuclear and coal power plants. Stavchuk said these plants are “getting very old” and the country needs renewable energy and modern balancing facilities.

Ukraine’s main energy company DTEK plans to phase out coal by 2040 and the government has applied to the Powering Past Coal alliance with a 2050 phase-out date, she said.

The country has large polluting industries like steel and cement. Exports of these products to the EU are threatened by the bloc’s proposed carbon border adjustment mechanism which would tax them at the border.

Economy minister Igor Petrashko is calling for an exemption from the border tax, on the basis Ukraine is working to align with EU climate standards including a 2050 net zero goal.

Ukraine has high hopes to develop hydrogen, for domestic use and for export. “Europe has a romance with hydrogen and we are anticipating this will end with a marriage not, as usual, a divorce,” said Riabchyn.

But Ackerman is sceptical. “There are many unrealistic assumptions about the role of hydrogen that is considered to be so huge now to transform transport, heating, industries and everything. It should not be the priority.”