Joe Biden promised to mobilise $20 billion to protect the Amazon rainforest, but negotiations with Jair Bolsonaro’s government are fraught 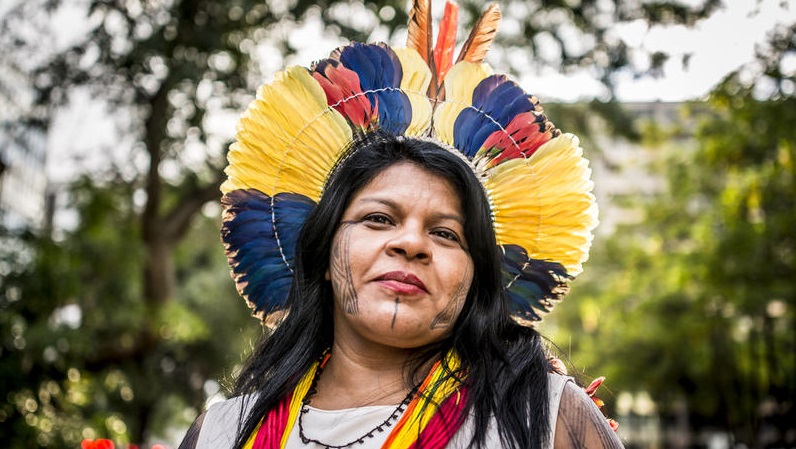 Sonia Guajajara was one of eight indigenous leaders who spoke to US officials on Monday (Photo: Greenpeace/Midia Ninja)

The US government is struggling to fulfill an election promise to protect the Amazon rainforest without giving money and a political win to Jair Bolsonaro, whose administration has overseen an increase in deforestation in Brazil.

On the campaign trail, Joe Biden promised to mobilise $20 billion in private and public money to stop “tearing down” the Amazon, warning of “significant economic consequences” otherwise — comments slammed by Bolsonaro as “disastrous and unnecessary”.

Now, Biden and Bolsonaro’s officials are negotiating a deal, in a key year for international climate action. Both leaders are expected to speak at a US-hosted climate summit next Thursday.

“As we lead up to the President’s Leaders Summit on Climate, we want to see a very clear commitment to ending illegal deforestation,” a US State Department official told Climate Home News, and “tangible steps to increase effective enforcement of illegal deforestation”. The US believes Brazil can achieve a “real decrease” in deforestation by the end of the 2021 fire season.

The spokesperson continued: “We continue to recognize that conservation and sustainable economic growth can go hand in hand. It is a complex challenge that also will require new and innovative solutions – solutions that include local community engagement, including indigenous and traditional communities, as well as new technologies and approaches to providing incentives.”

Sign up to our new daily newsletter for essential climate news and analysis, straight to your inbox

At the same time, US officials have engaged directly with indigenous leaders in Brazil, who complain their interests in the region are ignored or attacked by their own government.

On Monday, eight Brazilian indigenous leaders spoke online to Jonathan Pershing, the US official in charge of the negotiations, and US ambassador Todd Chapman. Dinamam Tuxá, executive co-ordinator of Brazil’s Indigenous People Articulation, was at the meeting.

Indigenous leaders called on US companies to stop buying products linked to Amazon deforestation and the US to pressure the Brazilian government to give indigenous people autonomy over their land.

Carlos Rittl, a former director of the Climate Observatory NGO, said the US “needs to be aware that they are negotiating with a government that declared war against the Amazon and indigenous people, who are seeing their forests invaded by environmental criminals, their leader being murdered and their elders dying from Covid-19”.

Over 200 Brazilian NGOs have warned the US against giving money to Bolsonaro’s government without strict conditions.

One is the Climate Observatory. Its director Marco Astrini said: “Brazil is today a divided country. On one side there are indigenous peoples, quilombolas [descendants of former slaves], scientists, environmentalists and other people that fight for life and against deforestation. On the other side is the Bolsonaro regime, threatening human rights and democracy and [putting] the Amazon [at] risk. Biden must pick a side.”

But the Brazilian government, led by environment minister Ricardo Salles, has resisted conditions on the funding. Salles has said he wants $1bn in aid in order to reduce deforestation by 30-40%.

According to Brazilian newspaper Folha de Sao Paulo, Salles’s presentation to US negotiators featured a dog looking hungrily at a rotisserie chicken through a shop window. Above the chickens, who had dollar signs on their chests, were the words “expectation of payment”. In this metaphor, the Brazilian government is the dog and US finance the inaccessible meat.

Izabella Teixera was the environment minister between 2010 and 2016. She told Climate Home News that giving $1bn a year in aid would not solve the problem. Over 90% of Brazilian deforestation is illegal, she noted, saying there shouldn’t be financial conditions on stopping environmental crime. She added that Brazil had financial support to tackle deforestation through the Amazon Fund, until the Bolsonaro government’s policies led major donors Norway and Germany to freeze their support.

To avoid supporting Bolsonaro’s federal government, campaigners are hoping that the US will give funding to the Legal Amazon, a consortium of nine Amazon regional states. “That would be a smart move,” said André Guimarães, director of Amazon research group IPAM. “[The Legal Amazon] have put together a pretty comprehensive deforestation combat plan.”

The states of the ‘legal amazon’. (Photo: OS2 Warp/WikiCommons)

Dinamam Tuxá said that indigenous peoples generally had a better relationship with state governments than with Brasilia. “There’s usually mutual respect and dialogue,” he said. “In some states, we’ve worked together to build a strong power to fight deforestation.”

But Teixera said sub-national governments’ relationships with foreign states was a “very sensitive issue” in international diplomacy. When Teixera was in government, Germany gave money to individual Brazilian states like Acre but this was only possible with the federal government’s approval, she said.

Today’s federal government was not inviting regional governors to talks, she said, but “there are other ways – not necessarily government to government – but you can have with philanthropy, institutions… to promote projects at sub-national level”.

The rate of deforestation has risen since Bolsonaro was elected. This has contributed to fires which made international headlines in 2019, sparking a war of words between Bolsonaro and French president Emmanuel Macron and endangering a trade deal between the EU and South America.

The Brazilian government’s response has been a military operation in the Amazon. Guimarães said this had been “a little bit effective”. Its ban on setting fires had shown results and the army had played an important part in the successful fight against deforestation in the 2000s.

But the army was “only one piece of the puzzle”, he said, with other policies driving deforestation up. Bolsonaro has defunded and defanged Ibama, the agency charged with enforcing environmental regulations, and said the Amazon should be opened up to development. “It’s quite schizophrenic,” Guimarães said.