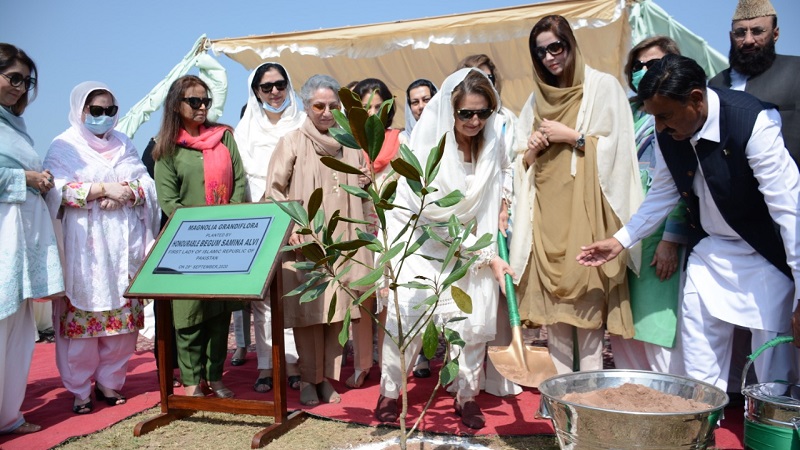 Pakistan has one of the largest tree-planting programmes in the world – a ready scheme for boosting employment in the wake of the coronavirus pandemic.

Like many developing countries, though, its capacity to build back better from Covid-19 is limited by a mounting debt burden.

The government is developing a novel debt-for-nature scheme to ease its debt woes and accelerate the “10 billion tree tsunami”. Designed by the Finance for Biodiversity initiative, the first-of-its-kind nature performance bond would link debt retirement with nature restoration targets.

Prime minister Imran Khan has promised to plant 10 billion trees across the country and restore more than a million hectares of forest. The mammoth project aims to increase resilience to climate impacts like extremes of rainfall, while absorbing CO2 from the atmosphere and creating jobs.

“We are investing heavily in nature so when this conversation started about the nature bond we were excited about it,” Malik Amin Aslam, Pakistan prime minister’s official advisor on climate change, told Climate Home News.

“There is a push post-Covid-19 to ask for debt retirement and if we can link [relief] to nature performance, it gives more value to the world,” he said.

As of February, the government claimed to have created 85,000 jobs by paying unemployed members of the community to work in tree nurseries and look after saplings, under its “tree tsunami”. It aims to employ another 200,000 people to drive the afforestation effort.

Prime minister Khan announced the creation of 15 national parks to protect over 7,300 square kilometres of land last year. The establishment of a National Park Service aims to create 5,000 jobs in nature protection to respond to a rise in unemployment.

The former cricketer turned prime minister has made the campaign one of his flagship policies since taking office in 2018, staking much of his reputation on the project’s success.

“This is a highly politicised project,” Mahmood Akhtar Cheema, country representative for the International Union for Conservation of Nature (IUCN) in Pakistan, told Climate Home News.

The government is in the first phase of planting 3.3 billion trees by election year in 2023 and is hoping to meet the first billion goal by the end of June – a target it is on track to meet, said Aslam.

Between $800 million and $1 billion have been earmarked for the tree tsunami in the next four years. IUCN Pakistan estimates the campaign could end up costing $2.5bn.

Syed Kamran Hussain, of WWF-Pakistan, told Climate Home News the pilot will help “develop the financial framework for the restoration of degraded ecosystems” at a time when liquidity is in short supply.

“The government is currently using its own resources, but there is a need for the international community to make investments,” Cheema said, describing the prospect of the new bond as “huge opportunity” to raise funds.

The triple crisis of Covid-19, ballooning debt and climate change has propelled debt-for-climate schemes to the top of the international agenda.

Khan has been vocal about the need for rich countries to provide debt relief to developing nations that are struggling to meet their population’s basic needs, let alone invest in sustainable and low-carbon development.

According to its central bank, Pakistan’s external debt and liabilities have grown from $95bn in 2018 to almost $116bn at the end of December 2020. On average over the past five years, debt interest payments accounted for a third of the country’s total revenues.

Pakistan is expected to benefit the most in absolute terms from a debt service suspension initiative agreed by the G20 group of rich countries. But the central bank estimates this relief will not be sufficient “to create the needed fiscal space to mitigate the impact of Covid-19”.

Mark Halle, an environment and sustainable expert who helped set up IUCN’s Pakistan programme in the mid-1980s, is familiar with the country’s efforts to restore its ecosystems and its need for funding.

Now a member of the Finance for Biodiversity initiative, Halle knows Aslam, who serves as the global vice president of IUCN, well. When he asked the climate advisor whether Pakistan would be interested in piloting the new bond, he quickly got his attention.

Under the scheme, a creditor nation would agree to write off a portion of newly issued debt or reduce repayment interest rates if Pakistan met agreed biodiversity and nature restoration targets.

This could include increasing mangrove coverage along the coast, for example. Mangroves are a natural barrier that protect from storms and sea level rise and store up to four times as much carbon as land-based forests.

Mangrove cover in Pakistan’s Indus delta has increased by an estimated 300% between 1990 and 2020, according to a recent study. But researchers found climate change and human activities, such as camel grazing, cutting trees for fuel and overfishing, had driven four out of eight indigenous mangrove species to extinction.

To ensure the environmental integrity of the pilot, satellite images will be used to monitor performance against agreed nature restoration targets.

“We made it clear that we would be looking for performance measures that genuinely created change on the ground,” Halle said. “Designing a new national park wouldn’t work because that is essentially drawing a line on a map.” But the restoration of a designated area could be rewarded.

“This creates a very strong incentive to perform” and accelerate the implementation of the government’s nature and biodiversity programmes, Halle told Climate Home News from his home in Switzerland.

“If the government subsequently decided to cut down the trees and plough the land, debt payment interest rates would rise again, creating an incentive not only to perform, but to stick with the performance,” he added.

One potential stumbling block is corruption.

Before Khan became prime minister, his party started its tree-planting initiative on a regional scale in the northern province of Khyber Pakhtunkhwa in 2014.

But the National Accountability Bureau found that about $3m had been lost to corruption along the way. The report cited cases of nepotism, misappropriation and embezzlement of daily wages.

There is also the threat of wildfire and drought reversing some of the forest gains.

Abid Suleri, executive director of the Islamabad-based Sustainable Development Policy Institute, stressed the importance of choosing the right species for the arid climate and nurturing them to maturity.

“It’s easy to plant a sapling. But to turn it into a tree requires a lot of dedicated care,” he said. “It’s ambitious, but it’s doable.”

A consortium including WWF, IUCN and the Food and Agriculture Organisation (FAO), will audit the first stage of the 10 billion tree campaign with financial support from German development bank KfW.

Getting creditors on board could be the most difficult part, Halle said. “Largely because it is new. Somebody has got to move first.”

Finance for Biodiversity is discussing the idea with the UK, Canada, Germany and Italy and has approached China – by far Pakistan’s largest official creditor – despite low expectation Beijing will get involved in the early stages.

Khan has a personal connection with UK environment minister Zac Goldsmith, who is leading on nature ahead of the Cop26 climate summit. Khan was married to Jemima Goldsmith, Zac’s sister, for nearly a decade before they divorced in 2004 and they have two sons.

Zac Goldsmith has previously described Pakistan’s tree planting campaign as “extraordinary” and “a truly global inspiration”. The UK government did not respond to a request for comment.

The UN Development Programme is planning to offer technical assistance to the Pakistani government to facilitate the structuring of the bond, a spokesperson told Climate Home News.

Vikram Widge, senior advisor at the Climate Policy Initiative, told Climate Home News there is appetite among creditors for debt-for-climate and nature schemes.

Widge said innovative and creative mechanisms could have “a huge impact” if deployed to reverse biodiversity loss, and invested in ecosystem restoration, forestry and regenerative agriculture.

“I think we need to do more of this, but I think we need to be smart and sensible about it. The pilots are critical for testing and learning what works, what doesn’t,” he said. It is more appropriate for middle-income countries with the ability to service debts than countries in severe debt distress, he added.

Pakistan is due to host World Environment Day in June, which will launch a 10-year UN campaign to restore ecosystems, and could be a moment to announce a deal with creditors.